We Got Our Kicks on Route 66

This may be the first time I’ve written a second blog post from the same campground – but two weeks is the longest we’ve stayed anywhere in the trailer (other than Boise).  We are still in northern Arizona and have spent some time on the landmark road, Route 66. 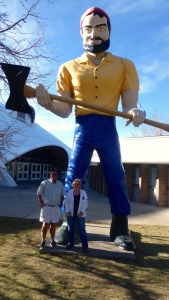 We enjoyed trying to make our way around Northern Arizona University. It has changed so much since we were a lumberjack and lumberjill from 1977 – 1981. We were able to find our old classroom buildings and our old dorms, but our first apartment in married housing didn’t look familiar. They have either remodeled or re-numbered the building since we lived there.

We visited the Riordan Mansion State Historical Park which surprised us by being right off campus.  We never knew it was there! When we were students at NAU some family members still lived there and it was not yet a historical park. 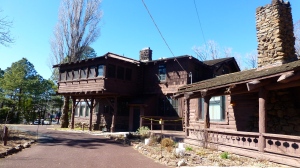 Two Riordan brothers married sisters and were part of the Flagstaff upper crust.  The families lived in a mansion that was two mirror image houses connected by an entertainment cabin in the middle.  It was designed by the same architect that designed the El Tovar Lodge on the south rim of the Grand Canyon. 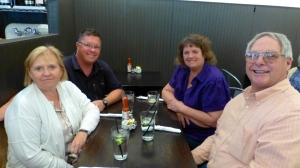 We enjoyed spending time with college friends Connie and Nick.  Connie and I were dorm resident advisors together.  They are two of the few people from NAU that we are still in contact with 34 years later. 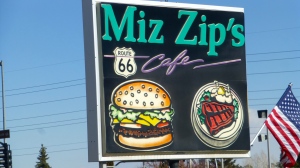 We enjoyed lunch at a Route 66 landmark restaurant, Miz Zip’s.  Arizona Highways magazine said it was famous for pies, and the pie was certainly good, but it was the bleu cheese dressing that was outstanding! They make it in-house and the owner shared the ingredients she uses – I just have to figure out how to modify it down as I don’t need a gallon at a time. 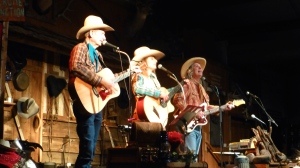 The Blazin’ M Ranch in Cottonwood was a great place for a cowboy show and dinner. 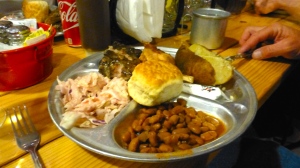 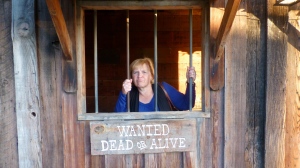 Yes, it is touristy, and cheesy – but also a real good time! 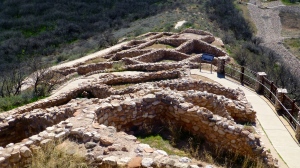 Another day we explored the Tuzigoot National Monument.  This is yet another site of dwellings occupied between 1100 and 1300. These ruins were unearthed in 1934 and are very exposed on the top of a hill. Unlike other ruins in the area, the park service is very actively trying to fortify the walls to maintain them. 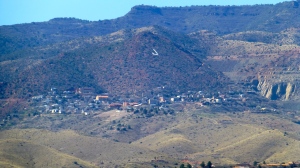 We traveled a short distance to Jerome, Arizona. It is an old mining town, with a colorful past, that once boasted 15,000 people.  It is now an occupied “ghost town” with hotels, bed and breakfasts, restaurants etc.  Notice the J for Jerome on the mountain above and then on the picture below to orient yourself. 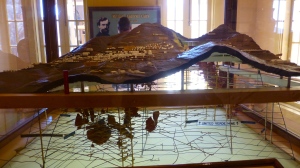 This 3D exhibit shows the town above ground and the very extensive mining underneath. The town was actually sliding down the mountain  bit by bit due to blasting.  Extensive mining stopped in 1954 and the town has been more stable since. I hope it isn’t on a fault line for earthquakes.  It seems like the mountain  would collapse like a house of cards. 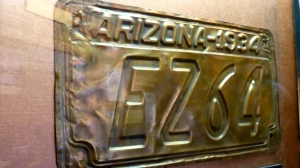 There was so much copper pulled out of this area that, for 2 years, Arizona actually issued copper license plates. 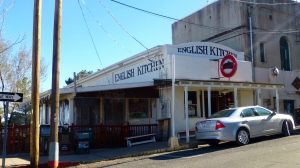 While in Jerome we ate lunch in the building that held the oldest restaurant in Arizona – established in 1898.  The English Kitchen operated continuously from 1898 to 2007.  It also had an opium den in the basement, but no worries – the last remnants of the opium den were removed in the 1980s!  In 2011,  a BBQ restaurant moved into the historic space. 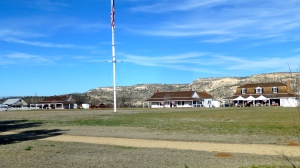 In Camp Verde, we went to Fort Verde Historical Park. It was built to protect area settlers during the Indian Wars. On the day we were there,  groups were doing reenactments. A physicians “assistant” showed us period medical tools and told us that during the civil war 87% of injured soldiers died from their wounds. In World War II that number was reduced to 4%. During Vietnam, 1% of injured soldiers died from their wounds.  Quite an improvement! 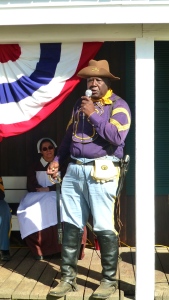 There were also Buffalo Soldier re-enactors. The name Buffalo Soldiers was coined by the Indians who saw men with dark skin and curly hair that fought as fiercely as a wounded buffalo. The Buffalo Soldiers were generally former slaves, who fought for the north, and remained in the army. By all accounts, the Buffalo Soldiers performed very well.   They surveyed and built a lot of the roads during western expansion. Buffalo soldiers also had responsibility for trying to guard and protect the early national parks. That was a difficult task because those who always had access to the lands objected to negro soldiers telling them they couldn’t hunt and graze on the lands as before.  That was years before the park service was established.

Other quick hits from our stay – 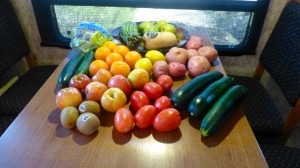 For the first time on the road, I ordered a Bountiful Baskets share. I did this frequently in Boise but had gotten out of the habit. I find that produce in these small towns is often very limited, marginal quality, and expensive so I was delighted with a produce haul.

Also for the first time, we ran into a couple at this park that we had camped next to in a previous campground.  Remember the “creepy place”?   They were the best thing about that campground!  People say that happens all the time in this lifestyle, but this was our first, very cool, experience. 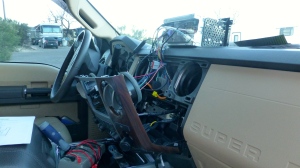 Randy had another engineering project – adding a component to our new truck radio so that the steering wheel controls would work again. I came out, took the picture, and went back in – too many wires and possibilities for it to never work again.  When he put it back together, the controls and the radio worked! 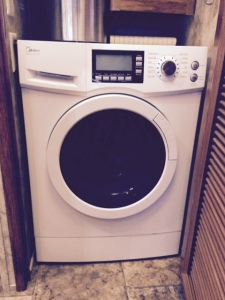 We sold the troublesome washer/dryer combo that just didn’t dry well enough anymore to keep me happy. We gave full disclosure about its shortcomings to the buyers but they thought it would be better than not having one at all. We have an appointment next week to get the Italian vented model installed and good riddance to the ventless one made in China.

We are experiencing another mail snafu – aargh! The mail was suppose to be sent on Saturday so we would get it on Tuesday or Wednesday – before we would leave on  Thursday.  When it didn’t come on Tuesday we called and they hadn’t sent it until that day.   Supposedly it should be here Thursday morning – the day we are scheduled to leave.   The UPS Store probably does a very good job at what its primary business is, but isn’t doing a good job at mail forwarding!  We’ll be looking for alternatives.

Update:  No mail so  staying another night….Randy had a heart to heart with the UPS store manager.   Hopefully things will improve.

4 Responses to We Got Our Kicks on Route 66