We Can Do Anything for a Month

This being our first time to volunteer in a state park, we were wondering what to expect but told ourselves  “we can do anything for a month.”   We are delighted to say that this experience has exceeded our expectations and been very enjoyable.

One of the reasons we wanted to volunteer was to be in a place long enough to be part of a community.  We have been very happy to work with our ranger friends, Lisa,  Chris, Kathy, Blu, Sheryl and George!

And also were most happy to share the Crooked River Camp host duties with our partners and new friends, Carl and Ruth.  We enjoyed all of the people we worked with, and would be happy if these relationships can continue outside the park. 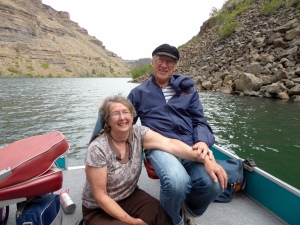 We spent one afternoon with Carl and Ruth (and Elko) on a pontoon boat we rented at the marina. 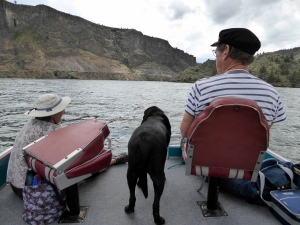 We were able to explore Lake Billy Chinook and view the steep walls and palisades from the lake level.  Namesake for the park, palisades are columns which formed in the basalt after volcanic lava flows.

There are a variety of interesting formations along the lake.

There are also a variety of wildlife, especially birds, that live along the lake.   Although it is a prime area for viewing Golden Eagles, we seemed to mostly see the ever present vultures.   One day I was driving my golf cart out to the ash dump area and saw a group of vultures circling the area.  I was nervous about what I was going to find out there given the circling vultures in old westerns.  I didn’t look too hard, but I didn’t see anything dead or dying.

Very unfortunately, we did end up seeing quite a few snakes,  including this guy who thought our campsite was an okay place to be!  Not!  Randy was gone when I saw it so thanks to Carl for moving it away!

Fortunately we never saw or heard a rattlesnake.  When one of those is sighted near a path or campground, they are moved  to a different part of the park.  That is a ranger’s job – not for us volunteers!  Not that I would do it even if it was in my job description…

There is an interesting type of lizard in the park.  The Whiptail Lizard is native to the southwest, but somehow made it to central Oregon.  They are all female and reproduce without the need of a male partner. 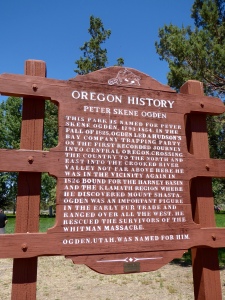 We finally had some nice weather to venture out on our days off.  We spent time at the Peter Skene Ogden State Park.  He was a fur trapper who roamed the west in the early 1800s and was the first in this area.  Additionally, he rescued the survivors of the Whitman massacre near Walla Walla, Washington and the city of Ogden, Utah is named for him.

Elko stayed in the truck!

The Ogden park is adjacent to the steep Crooked River gorge and there are three bridges within walking distance crossing the expanse.

The first is the Oregon Railroad Trunk Bridge, built in 1911.   This bridge was significant in the railroad wars between the Spokane, Portland and Seattle Railway and the Union Pacific.   The SP&S won in court but outside the court, the battle involved “night raids, dynamite, gunfire and fistfights.” 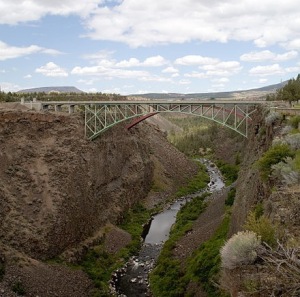 The second bridge, 464 feet long and built in 1926, was for vehicles on Highway 97.  When constructed,  it was the highest (295 feet), single span bridge in the country.   It served vehicles until 2000 and is now open for foot traffic. 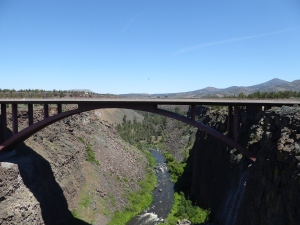 It was replaced by the Rex T. Barber Veterans Memorial Bridge.    Rex Barber was a fighter pilot in World War II from the nearby town of Culver.   He and his crew were credited with shooting down Yamamoto Isoroku’s plane in 1943.  Yamamoto was  the mastermind of Japan’s  attack on Pearl Harbor.

We also went to Pelton Park which is one of the parks run by Portland General Electric.  They operate three dams in the area and the fish ladders are quite extensive.

The path on the right is the fish ladder.

At a wildlife overlook we heard a huge amount of loud squawking across the river!

The visible brown sections are nests and inside were many, many huge birds!

They were flapping around making noise and we assume they were juvenile great blue heron thinking about jumping ship. 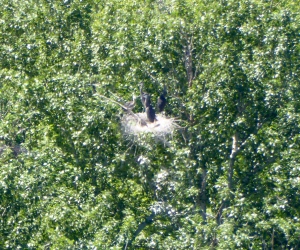 On a personal note, we celebrated our 35th anniversary on May 23rd.

During our honeymoon in Mazatlan, Mexico we ate at a 5 star CHINESE restaurant.  Strange, we know.  So, in keeping with that idea, we went to Madras Oregon’s highest rated Chinese restaurant on Trip Advisor. 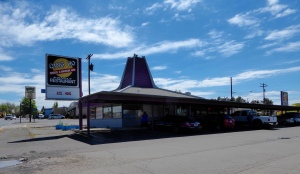 The Ding Ho Family Restaurant doesn’t look like much, but the food really was great!     Even the left overs were great. 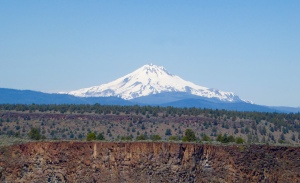 This week we were finally rewarded with a very clear view of Mt. Jefferson.  It has been a treat to be able to see Mt. Jefferson, Mt. Hood and the Three Sisters from the campground and while on our local travels.

We are preparing to leave here in a few days.  We will play tourist again for the month of June and spend time with my parents in Vancouver and my cousin’s family in eastern Washington.

In July, we become volunteers once again. We can only hope the experience will be as good as this one has been at Oregon’s Cove Palisades State Park.