The Chief Behind the Park 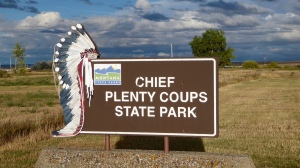 We have spent the last month in a park that was the homesite of Chief Plenty Coups, the last principal chief of the Apsaalooke or Crow Tribe. The opportunity to learn about Chief Plenty Coups was a large part of why we were interested in volunteering at this remote Montana park on the Crow Reservation.

Given how loved and revered Chief Plenty Coups was and is to the Crow people, I feel inadequate to condense his life into a brief story, but with humility, I will try.

Alaxchiiaahush, later named Plenty Coups, was believed to have been born in 1848. As a young boy he went on a vision quest into the sacred mountains, going for days without food, water, clothing or shelter. Although not all boys receive a vision on their quest, he did.

Plenty Coups saw a forest of trees destroyed by a fierce storm. A lone tree left standing was the lodge of the chickadee. Although small and insignificant, the chickadee learned from the mistakes of others. In his vision he also saw that all buffalo were gone from the plains and were replaced by other animals, some spotted, resting in small bands, and which bellowed differently from buffalo.  He also saw a lodge of babies but was told not to go inside. His vision also showed him an old and feeble man sitting alone by a house.

Upon returning to camp, the wise men of the tribe interpreted his vision. The dream was a warning. It meant that white men would take over the country and the tribes who fought the white man would be beaten. By listening and learning, as the Chickadee does, the Crow would be as the one lodge remaining, pitched in safety and cooperation with the white man. In this way they would keep their country. The buffalo would be gone and the white man’s spotted-buffalo would cover the plains.   Plenty Coups would live to be old and be known for his deeds. He would learn to live in a different way and would be chief, yet he would have no children.

Did his vision come to pass?

As a young man, Plenty Coups enjoyed the nomadic life of the tribe, hunting and learning to be a warrior. Their lands encompassed plains, high mountains, and rivers great and small. It provided a wealth of food including their primary sustenance for many needs, the buffalo. Their lands often needed defending against surrounding tribes, principally the Sioux, Cheyenne and Arapahoes.

Important in tribal life was being brave and strong and proving oneself. To be able to marry (before age 25) one must “count coup.” There were four major coups, or war honors to be achieved: 1) Be the first to touch or strike the enemy. 2) Take a weapon away from the enemy. 3) Take a horse, or horses from an enemy camp. 4) Lead a successful war party.

To be considered as a potential chief, one must be able to count all four coups. Chief Plenty Coups became a chief when he was near 25 years old and continued to count coup many times over for years. Thus, his name – Plenty Coups.

The Crow never fought against the white man, instead choosing to fight with him against their traditional enemies. Plenty Coup and other Crow scouts and warriors fought with General Crooke at Rosebud Battlefield and still others with General Custer at Little Big Horn. Despite these specific losses by the white man’s army, the vision of defeat of the Indians across the plains was coming to pass.

The plains buffalo herd, estimated to be 30-60 million strong, once had taken men days to ride from one end to the other. It was thought to be 20 miles in width and 60 miles in length.  With western expansion, the buffalo herd was diminished and the plains Indians struggled to maintain their way of life. Recognizing the importance of the buffalo, General William Tecumseh Sherman and others, approved the slaughter of buffalo as a way of conquering the tribes.

By the mid 1880s, and after near extinction, it was through the work of just a few, notably MaryAnn and Charles Goodnight and former hunter Buffalo Jones, that remnant herds remained.

The US government’s policy toward Indian peoples was to isolate them on reservations and force them to adopt white ways. Specifically, children were often required to attend white-run schools and adults were forced to adopt an agricultural sedentary lifestyle. To that end, in 1885 the government built a house for Chief Plenty Coups. If the chief was seen to occupy a Euro-American house, it was thought that others on the reservation would be more likely to adopt this way of life.

The Chief still chose to live in a traditional lodge, next to his house, in the summer months.

With Chief Plenty Coups guidance, the Crow were able to negotiate the white man’s world with some success. Instead of being totally displaced, their initial reservation (33 million acres, reduced to just over 4 million acres in 1851) remained at the heart of their previous nomadic lands. 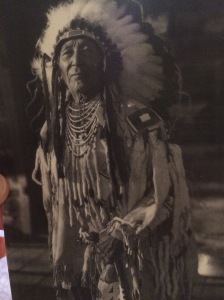 Chief Plenty Coups, and other tribal elders, made several trips to Washington DC from 1880 – 1921 to negotiate the reduction in reservation size (down to 3 million ares in 1891) and to resist the intent to open it to non-Indian settlers.

In 1921, Chief Plenty Coups, widely known for promoting goodwill between Indians and whites, represented all Indian Nations at the burial of the Unknown Soldier. He placed his headdress and two coups sticks to honor the fallen warrior. These are still on display at Arlington National Cemetery.

Replicas on display here at the museum.

On one of his many trips east , Chief Plenty Coups visited Mount Vernon, the home of the First White Chief, George Washington, and noticed that “no man spoke harshly of his life or deeds.” Plenty Coups determined to dedicate his own version of Mount Vernon in Montana which would be a monument to the Crow People and to its cooperative use by Indians and white men. He and his wife bequeathed their home and lands in 1928. His vision is realized in Chief Plenty Coups State Park. 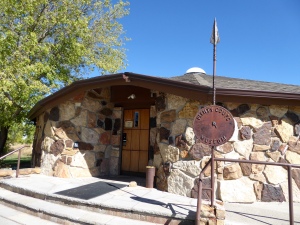 In the park there is a Visitor center and museum, a Lifeway walk, a sacred spring and Chief Plenty Coups house. He lived in the house until he died in 1932 at age 84. When his wife Kills Together died, he followed custom and married her sister, Strikes the Iron. As in his vision, he was the  old and feeble man at the house.

He is buried on the grounds with his two wives and one adopted daughter. As in his vision, Chief Plenty Coups had no natural children. The Crow people were his children. 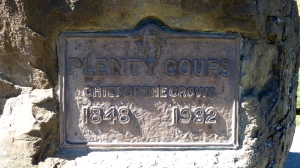 2 Responses to The Chief Behind the Park