After staying a month at each of our last two stops, the four nights we spent at Sunflower Resort in Surprise, Arizona – northwest of Phoenix – went by in a flash. Sunflower Resort is a terrific park combining the things we loved about the Yuma park and the Tucson park –  lots of activities, music around the pool, very clean and tidy. If you like snowbird parks (and I guess we do) Sunflower is a good one.

Elko loved the dog park and wanted to go there every day – at least once! On the way to the dog park we noticed a Boise State banner so made a point of stopping to chat when we saw them out. 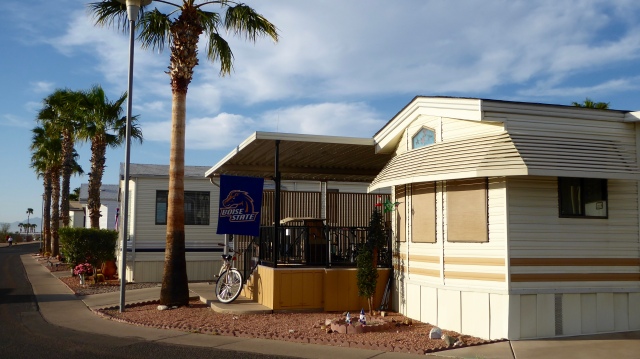 They were Darlene and Don from Kuna, Idaho – and their daughter  had taught with our good friend and Kuna teacher, Cindy!   Always a small world out here!  Darlene and Don are the stage managers for this year’s Sunflower drama production.  The play this year is “Drinking Habits” and Don invited us to attend the dress rehearsal so the actors could see how things played off an audience. The play was delightful and we enjoyed our free afternoon show!

We sat with Jean, age 93, who lives in the park full time and told an interesting story. She met her “husband to be” in November 1942, just two months before he was shipping out to the war in Europe. Although they wanted to marry , his father would not allow it. After a couple of years, he was injured in a tank explosion and spent time in a hospital in France. When he came back to the US in 1945, they were married. Jean’s husband passed away in 2001 after 55 years of marriage. We have met many interesting people at these snowbird parks!

We met Gerry and Kathy at the park in Tucson and spent some time with them there.  We “snowbirds of a younger age” found we had quite a bit in common.  They too were coming to Surprise and we got together a couple more times. Hopefully we’ll see them again sometime down the road. 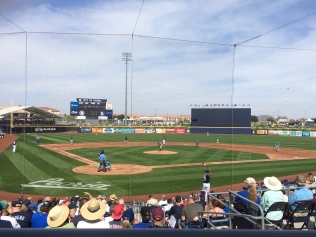 And the reason we came here ….spring training! We enjoyed two Mariner’s games – one win and one loss.  Both days the established players played a few innings and then gave way to those who are trying to make the team.

Fun times! We are blessed!