In our dash across country, we have four stops in Minnesota.  Two stays in, we’re having a great time visiting and exploring. 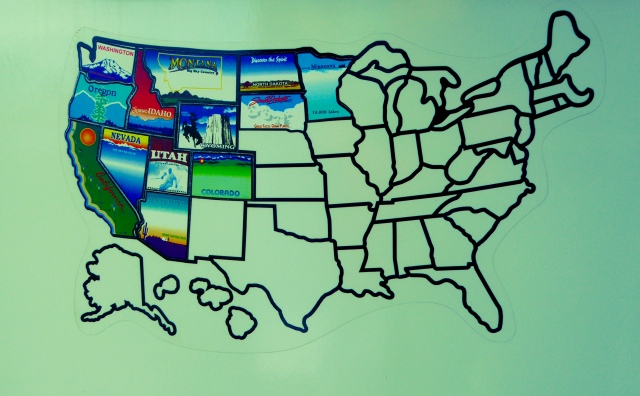 Adding another state along the way – Minnesota!

Our first stop was in Detroit Lakes with intent to spend a day with my dad’s cousin Eenie and her husband Dale.   They live in Park Rapids.

Eenie’s recollection of me goes way back to 1961 when my grandparents took me along on a family vacation in North Dakota.

Like my grandmother was, Eenie is a keeper of family lore. We enjoyed hearing her stories.

Eenie showed us an engraved spoon believed to have been an engagement gift for my paternal great-grandparents, John and Brita Olson. They married in Sweden in 1899 and brought their family to the United States several years later. Eenie confirmed a story I’d heard over the years that one of their children, an infant boy, died aboard ship but was kept with them to bury in North Dakota. My grandfather and Eenie’s mother were two of several more children born to them in the United States.

Eenie and Dale took us to Itasca State Park where the mighty Mississippi River has its headwaters. The Mississippi is the fourth longest river in the world at 2318 miles. It also ranks fourth in the world in watershed area which includes 31 states and 2 Canadian Provinces. 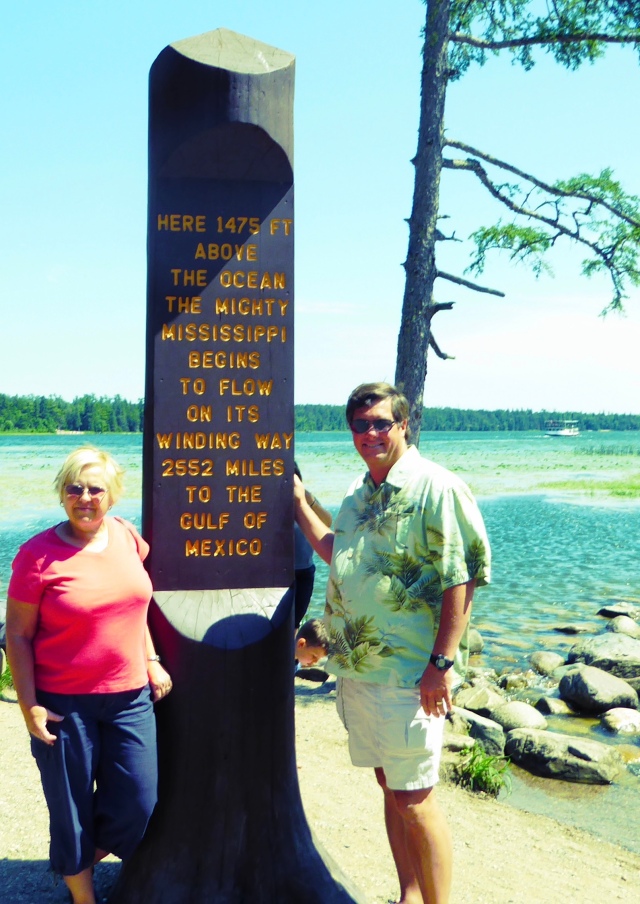 Historically, the Mississippi was measured at 2552 miles, now believed to be 2318.

While on an expedition to sign treaties in 1832, Henry Schoolcroft sought the source of the Mississippi River. The Ojibwa showed him a lake which Schoolcroft renamed Itasca, from the Latin veritas caput, which he believed meant “true head.” 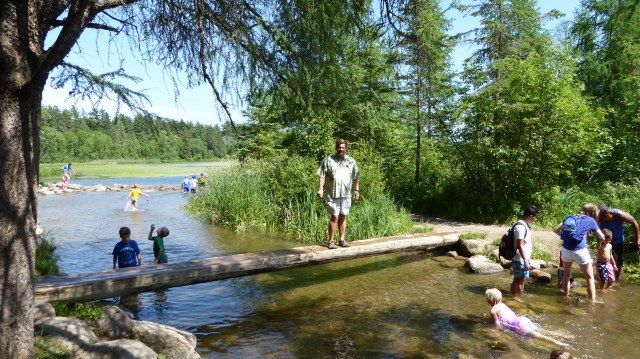 Randy walking across the headwaters of the Mississippi River. 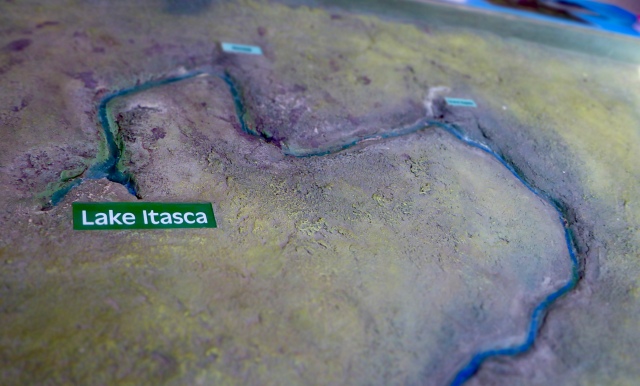 Although the Mississippi river flows south, it begins by flowing 63 miles north and then meandering through Minnesota.  In fact, 30 percent of the river’s total length is in Minnesota. 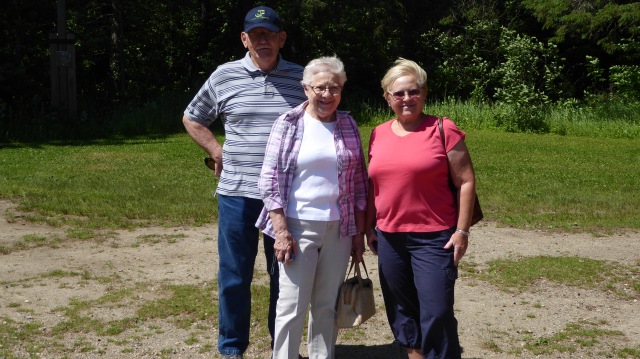 Thank you Eenie and Dale for a truly terrific day!!!

We moved to a campground on Lake Kabetogama, adjacent to Voyageur National Park. This park commemorates several generations of voyageurs, who were critical links in one of North America’s biggest industries, the fur trade. When the industry moved inland in the 1700s the Ojibwa supplied furs from vast areas north and west of the Great Lakes.

Voyageurs, many who had intermarried with the Ojibwa, traded goods for furs. They rowed and portaged through 3000 miles of lakes, rapids and crossings to get to a rendezvous point near the area that is now Voyageur State Park. 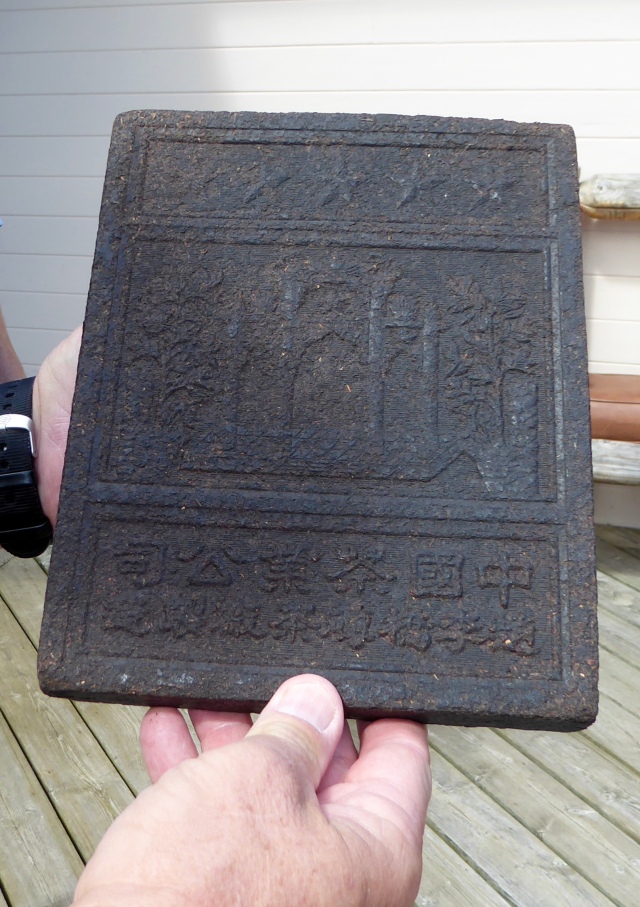 Compressed tea from China was one of the goods traded to the Ojibwa.

Other voyageurs from Montreal rowed through the Great Lakes to the rendezvous site with goods to trade.  They then returned to Montreal with the furs. This cycle continued until fashions changed in Europe and beaver hats gave way to silk. 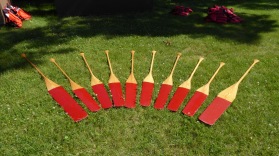 We enjoyed a guided canoe ride and learned more about the life of voyageurs. 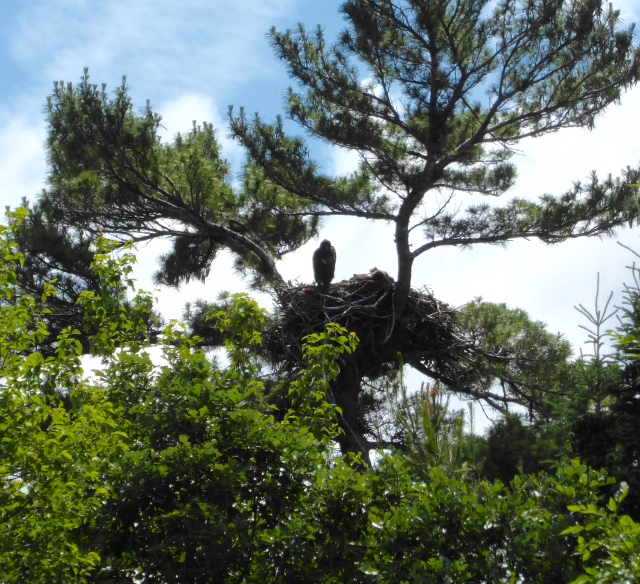 We saw two eagles during our canoe trip on Lake Kabetogama. Throughout the United States, only Alaska has more eagles than Minnesota. We were surprised to learn that Florida was third.

America’s Ice Box! If you live here – embrace it!

We took a day trip to International Falls, Minnesota, often the coldest place in the US.

We went to Smokey Bear Park which has the country’s largest Smokey at 26 feet. 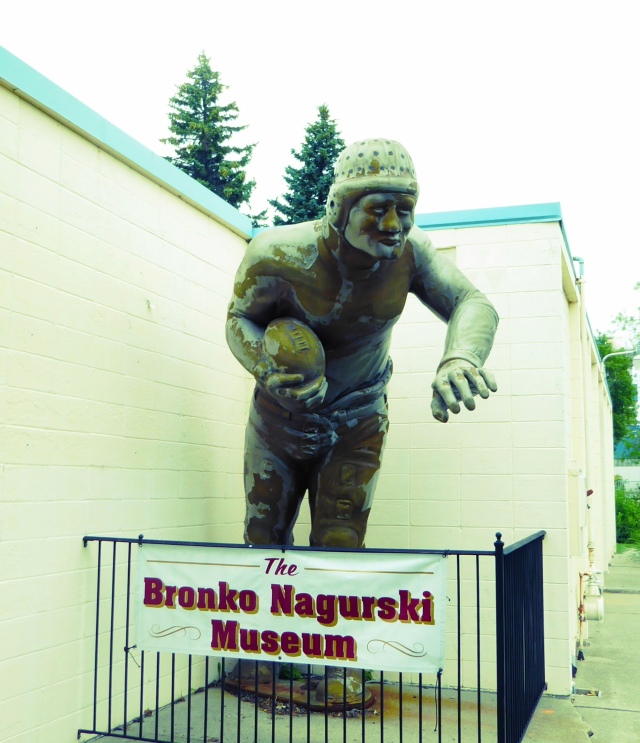 We also went to a museum celebrating native son, Bronco Nagurski, touted as one of the best football players of all time. Nagurski played both offense and defense on teams in high school, the University of Minnesota and the Chicago Bears. He was one of the highest paid players in the NFL in 1930, making $5000 for the season. He is in the Minnesota and NFL Halls of Fame. He had a second career as a professional wrestler but always returned to International Falls, his family and his farm. Even though neither of us knew about Bronco Nagurski going in, the local boy made good angle was still heartwarming.

Heading south from our campground we went to the Vince Shute Wildlife Sanctuary and saw more than a dozen American Black Bears. Vince Shute began feeding the bears many decades ago as a “compromise” to keep them from breaking into his cabin to eat. Generations of bears were fed and habituated to people. With Shute’s death, and his concern about what would happen to the bears, a wildlife sanctuary was established to manage this situation. Acknowledging that the feeding should never have begun, the wildlife sanctuary continues it for now to avoid larger problems. It isn’t clear what the end game will be but currently there are educational opportunities and pleasure in viewing the bears from a secure, elevated walkway. 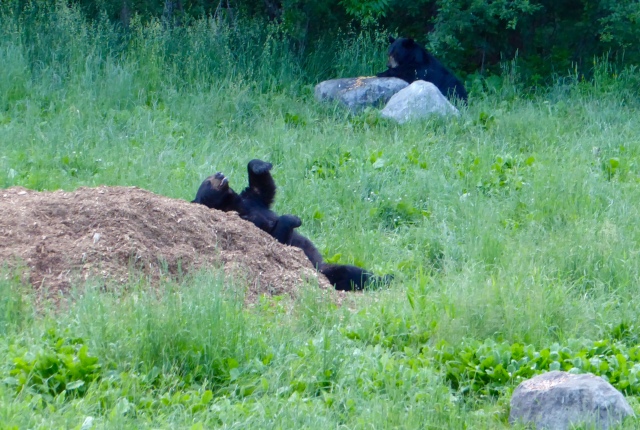 Although only two in this shot, we could sometimes get three or four bears in a single picture.

Buckets of bear scat, collected daily, serve as a repellant to keep the bears away from the tires they desire.

We’ll end with this bear cub who was WAY up the tree napping while mama was eating.

6 Responses to Meandering through Minnesota