Wisconsin: We Earned Our Map Sticker!

We were glad to arrive in Wisconsin, a state that neither of us had been to before. We were excited to reconnect with friends Peggy and Myron, our neighbors for the month of January in Yuma.   It was an easy decision to come through Mondovi, Wisconsin and see them.

All was well as we arrived and got settled in on their daughter and son-in-law’s farm. Peggy and Myron live full time in their toy hauler trailer and have this area as their home base for the months they are in Mondovi.

We visited very comfortably and were glad we had come. They showed us around the area and we went to dinner. We knew thunderstorms were expected so we went back and settled into our respective trailers anticipating some lightning, thunder, rain and wind – regular thunderstorm stuff. We like storms, no problem…..

Before long we had a Severe Thunderstorm Warning. That’s our location in the light blue circle getting ready for yellow, orange, red and brown-red level thunderstorm activity. It started with lightning – everywhere. There were cloud flashes and ground flashes, some quite close. We heard thunder almost continuously.

Our phones alerted us to a tornado sighting 21 miles away with Mondovi included in its projected path. We could hear the sirens from Mondovi and called Peggy and Myron in their trailer about 30 yards away. They said Mondovi sounds the warning sirens for severe thunderstorms and tornados so it didn’t necessarily mean that a tornado had been sighted near us. That made us feel a little better…

We talked about getting in the truck and going in the opposite direction but we had waited too long as were already in the middle of it. By our inaction we had “decided” to stay and ride it out.

Severe thunderstorm warnings advise you to go to a basement or interior room without windows. We were sitting in our trailer in a very open field feeling quite exposed and vulnerable. Our window shades have two layers and I pulled down the light diffusing shade on each window to provide some small bit of protection in case a window was broken.  Yet,  we wanted to see what we were facing.

The wind and rain came in torrents. Water started coming in through the window’s weeping holes where the worst of the storm pounded against our trailer. Although the winds seemed to be coming from everywhere, we were glad the worst of it was hitting us on an end instead of broadside.

We stared at our phones watching our position within the radar display. The tornado’s path was adjusted slightly to the south so we were no longer in the projected path. That was good but then the alert showed a mesocyclone at our location. In the middle of this massive thunderstorm, with the trailer rocking and rolling in the wind, I googled mesocyclone not at all sure I really wanted to know what it was. In very simple terms a mesocyclone is when the atmosphere rolls horizontally. If one end starts to tip up vertically, it can be the genesis of a tornado.

Have I mentioned that Randy and I both like storms a lot? But we weren’t liking this one at all. I prayed continuously while scanning the skies for a tornado. I attached Elko’s leash in case we had to make a run for it. But run to where? Peggy and Myron’s trailer is tucked in under trees but was that a good thing or a bad thing?

As the storm finally moved past we could see a little river moving down our friends’ driveway and under our trailer. Did we survive the storm just to get knocked around in a water flow?

Well, obviously my prayers were answered and we survived. It was about 90 minutes from the beginning of the storm to the end.  For 45 minutes it was the scariest storm I’ve ever been in given our circumstances. I called my parents to tell them we were okay because I assumed, correctly, that they were aware of where we were and the storms around us.

The next morning, we surveyed the damage. We saw that this huge tree trunk had split and fallen. Thankfully, it didn’t hit Peggy and Myron’s trailer! Much of their driveway rock had washed away under our trailer and down into the field.

We were all surprised that we hadn’t heard this large tree come apart and fall. 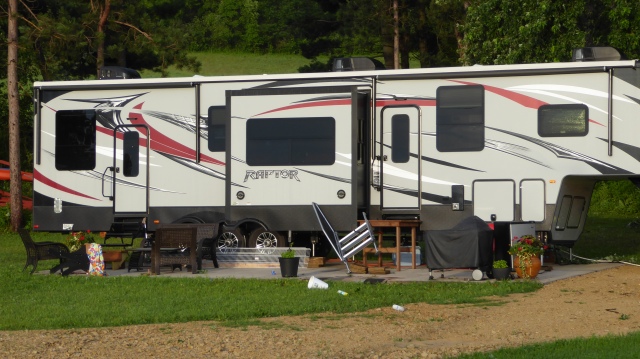 Peggy and Myron had some things blown and tipped at their trailer about but nothing significant – except for that big tree about 20 yards away!

Peggy heard that the Thunderstorm had been a Category 3. That means Significant Danger and winds between 55 and 75 mph.  She measured over three inches of rain with the storm. An RV dealer in the nearby town of Durand had trailers blown over on their sides.

This was part of a farm outbuilding. We saw people cleaning up everywhere.

All around the area we saw trees down or twisted or split. But we also saw beautiful Wisconsin fields and farms.

We enjoyed seeing these corn cribs on this neat and tidy Wisconsin farm.

We went to a park overlooking the Mississippi River. 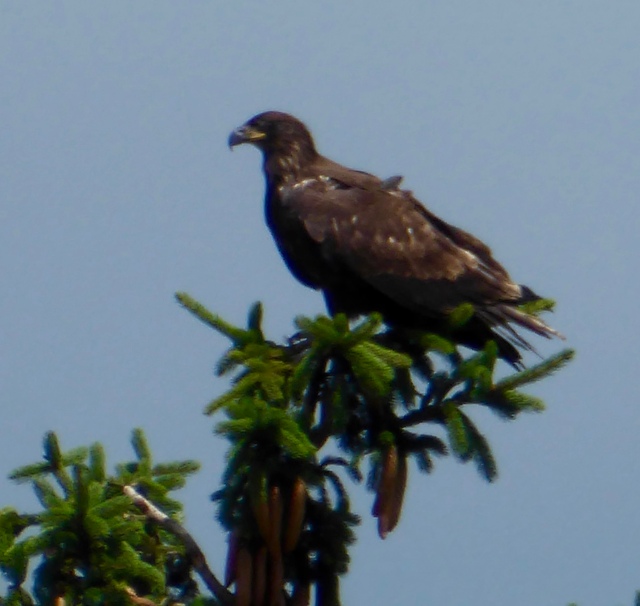 We enjoyed a glass of wine at a local winery and watched this juvenile eagle.

We went for our meal at Bucknuckles, a local favorite with a very eclectic decor. 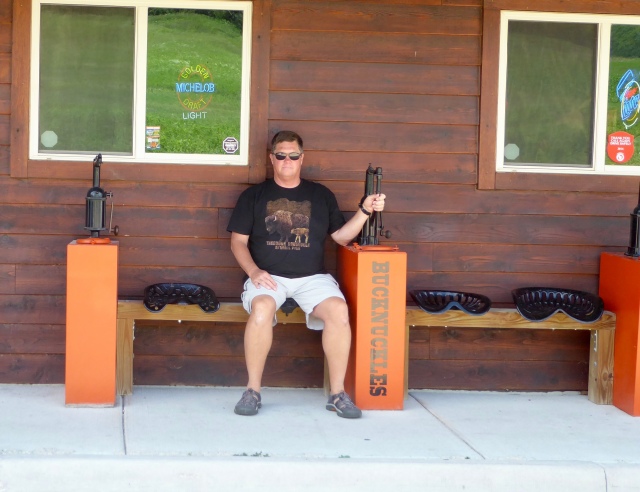 The benches have tractor seats! The inside has them too, but on the ceiling. 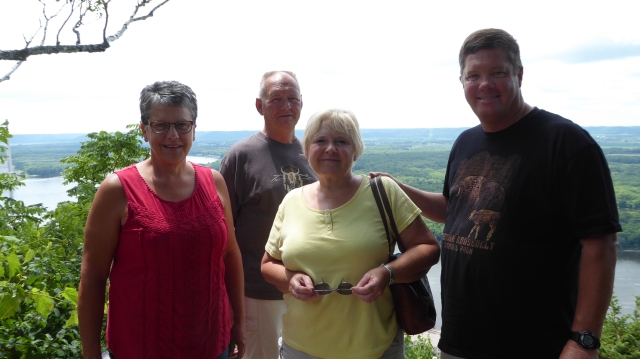 We had a great visit with Peggy and Myron and a very memorable time in Wisconsin! 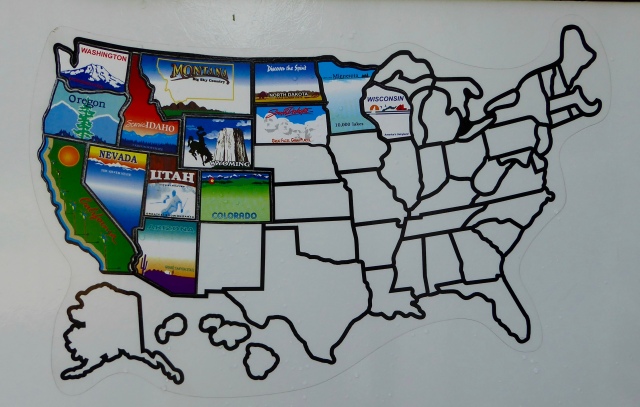 Adding Wisconsin in a memorable way!

This was our most memorable map sticker ever! We hope we never have another state rival it in drama!

7 Responses to Wisconsin: We Earned Our Map Sticker!