Gifts of the Lifestyle near Kalispell

Traveling full time is a lifestyle with wonderful gifts. Of course, there are people and things we miss from our old life, but we have experiences on the road we just wouldn’t have staying in Boise.  Being near Kalispell has highlighted that once again.

One of the best gifts of the lifestyle is seeing friends and family that we wouldn’t see otherwise. We’ve also been able to connect again with people we’ve met while traveling. We always have such a good time! 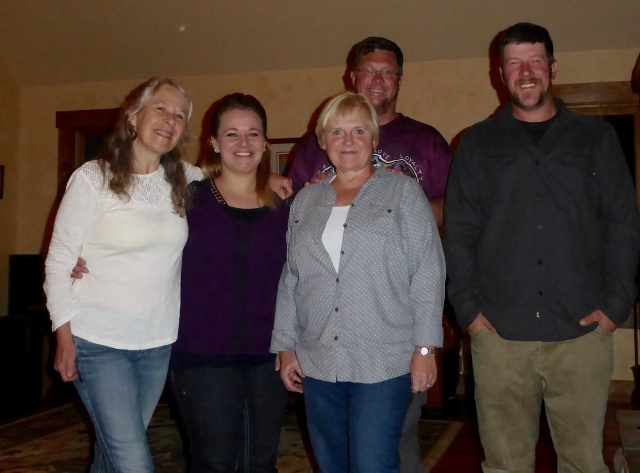 This week we were able to see former Boise friends, Lori, Mindy and Travis who moved to Kalispell about fifteen years ago. We enjoyed dinner, conversation and the opportunity to meet Mindy’s family.  We missed Mark, their husband and father, who passed away during the intervening years. 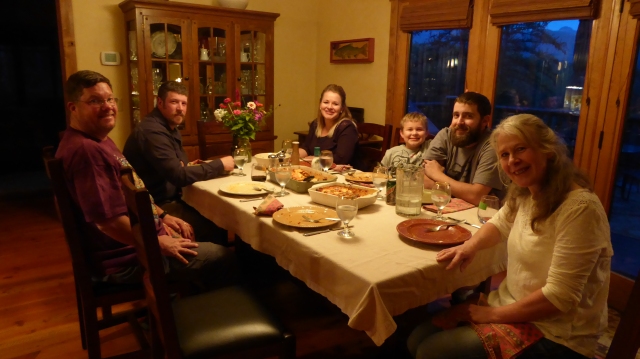 We had a wonderful time catching up with their lives and seeing Lori’s lovely Montana cabin. They welcomed us so graciously, thank you!

Another gift of the road is to see and explore some really beautiful places – places like Glacier National Park! 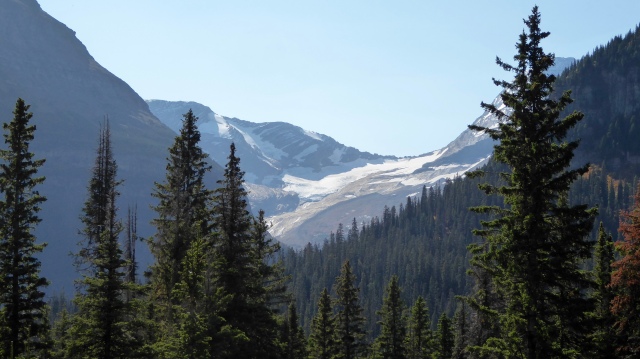 Twenty five glaciers remain at Glacier National Park.  In 1850 there were 150 and the projection is that all will be gone by 2030. 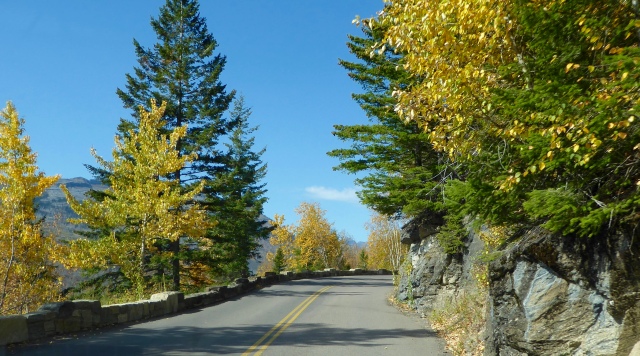 We drove east across the park on the Going to the Sun road. 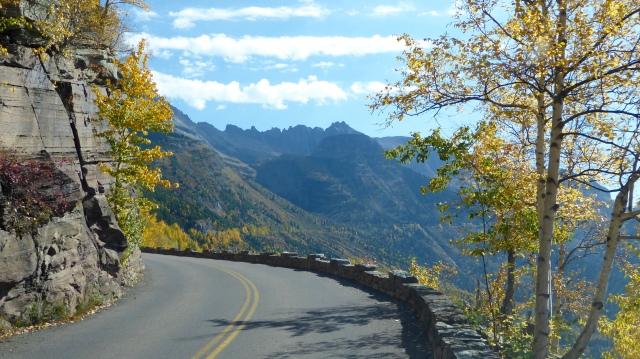 Construction of the Going to the Sun road began in 1921 and was completed in 1932 . The road is a National Historic Place, a National Historic Landmark and Historic Civil Engineering Landmark. The narrow two lane road hugs the mountainside and crosses the continental divide at Logan Pass. It is just short of 50 miles long.

The road is only open for a few months each summer due to snow levels that can measure 80 feet deep at Logan Pass. It usually takes about 10 weeks to open the road in the spring and early summer, at a plow rate of 500 feet per day. 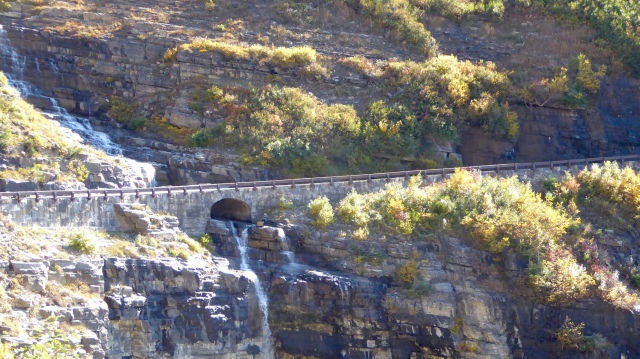 Wooden guardrails are removed each fall and replaced each summer so they are not destroyed by avalanches. 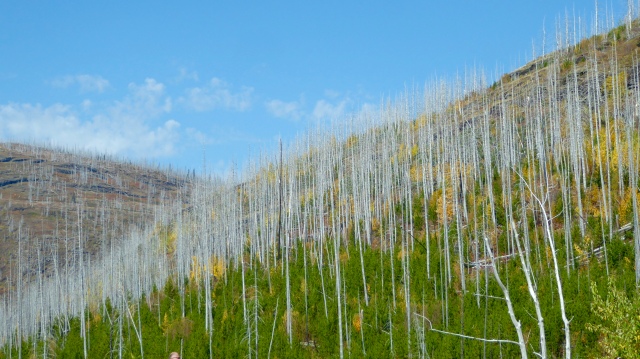 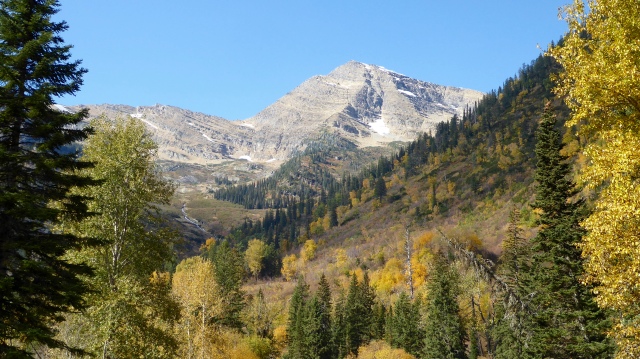 We went to Glacier National Park years ago when our family was on a quest to stay in all the Great Lodges of the West. There are four lodges in Glacier-Waterton National Park and we stayed a couple nights in each of them.  As a result, we didn’t feel compelled to see everything we could see this time, we just enjoyed the road and the scenery. 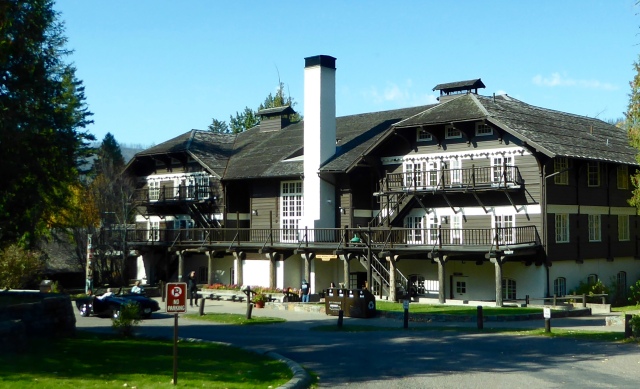 We did drive by Lake McDonald Lodge – It looks the same, just a grayer shade of brown. 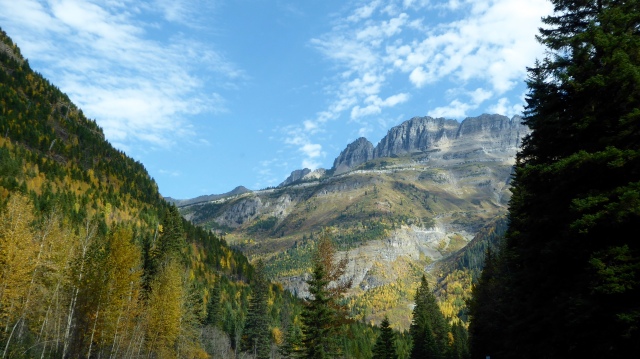 A lovely fall day at Glacier!

What a gift to travel the Going to the Sun road on a beautiful day in late September!  The road could be closed in just a few short weeks. 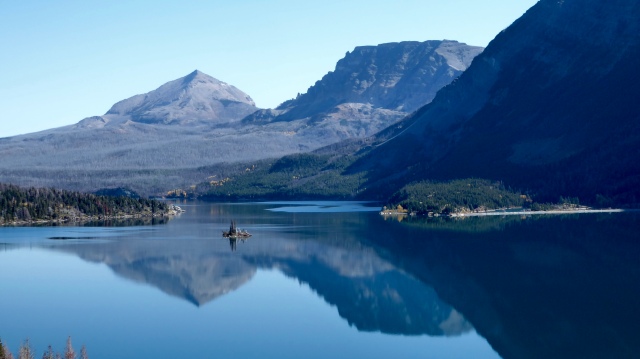 When we exited the park on the east side, we looked for a place to have lunch but found that almost everything was closed for the season. The place we did find was closing two days later so our choices were limited – but we managed.

We drove back towards Kalispell along the southern border of the park and went to an observation deck above a natural goat lick. We even saw goats! The people there before us said there were two adults and three kids. I’m not sure we saw them all, or at least not very well, but I did get a picture of two of them preparing to swim back across the river. 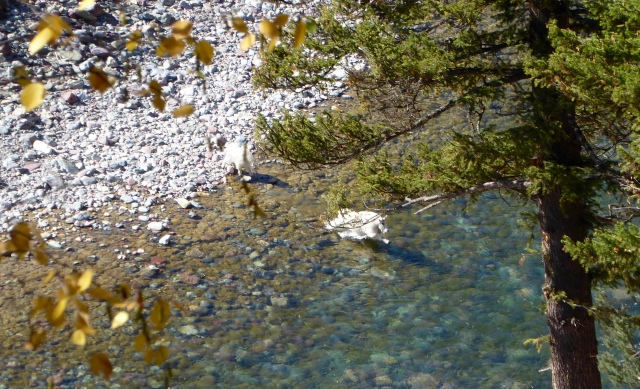 One of my favorite gifts of the road is learning about new places and people and hearing the stories.  I went on a tour of the Conrad Mansion Museum in Kalispell. 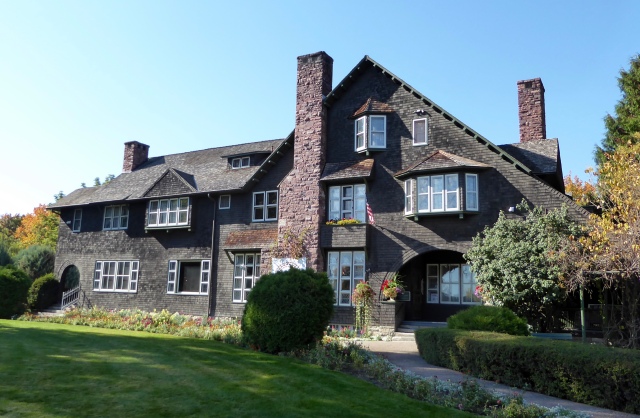 The Conrads were the first family of Kalispell and this home is unique in that their youngest daughter lived on the mansion grounds until it was donated to the city as a museum. Ninety percent of the furnishings belonged to the family, something different than most historic homes we’ve seen.

Back at the trailer, Randy participated in another of the “gifts of the road” – non stop maintenance on our rolling home. 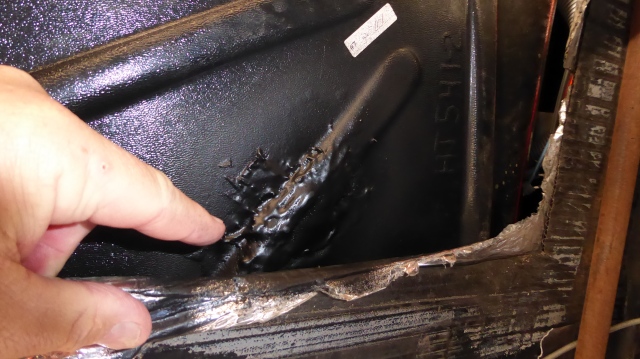 He found that one of our gray water tanks, the one associated with the kitchen sink, has a crack in the bottom. He has tried a few “solutions” but it is still a work in progress. I’m confident he will get it fixed.

We have been staying at a campground in a small town south of Kalispell called Lakeside. It too is closing for the season after tonight and we will be heading south to Bozeman to the one and only campground that is still open there.

We’ve enjoyed some small town quaintness while we’ve been here. This police car is moved to a new location each day but the police mannequins never get a day off! 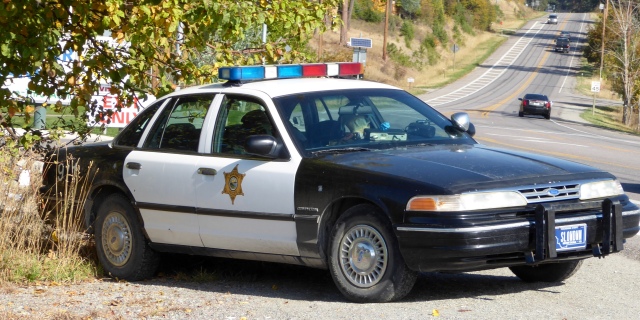 We have also been fortunate to get the local paper as a benefit of our campground stay. Much of the information didn’t mean anything to us but we did find the people-bear interaction stories interesting.  We also enjoyed the police blotter reports.  Here is a sample!

8:31 a.m. A bear destroyed a chicken coop on Kuzmin Lane in Coram. Now seven of the original 11 chickens have gone missing.

10:34 a.m. A Kalispell woman reported that the neighborhood woman has the wrong idea about her.

Until we meet again from Bozeman….

6 Responses to Gifts of the Lifestyle near Kalispell