“An Angel Worked in a Synagogue to Help the Vatican” 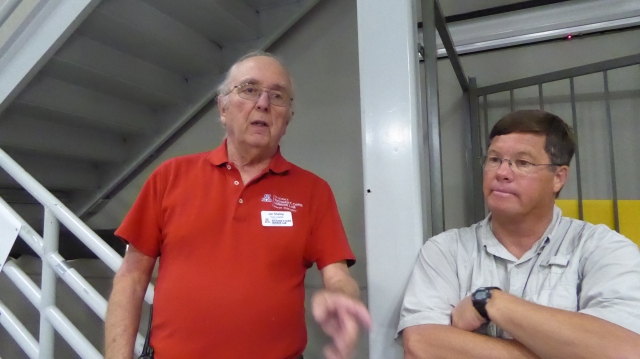 “An Angel Worked in a Synagogue to Help the Vatican” was the quip provided by our tour guide Jon at the University of Arizona Mirror Lab.

Jon told us about Dr. Angel, an astronomy professor at U of A, who was approached by folks at the Vatican Observatory to make new mirrors for the Vatican Advanced Technology Telescope in southern Arizona.  Dr. Angel had a theory for a new process and used a vacant synagogue as his work space.

Eventually, Dr. Angel and his new process moved under the home grandstand at the University of Arizona football stadium. The geologically sound land base, chosen to support the stands, provides a good foundation for the delicate work of creating telescope mirrors. 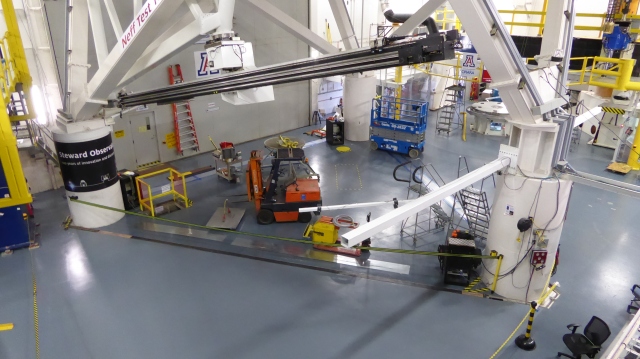 The large triangle “floats” so that mirror calibration and measuring can go on, even when the stands are rocking.

Although the Mirror Lab, and its 20 engineers, have completed many jobs and have more  in the queue, the current assignment is to create the mirrors for the Giant Magellan Telescope (GMT). The GMT is being funded by a consortium of international foundations from Australia, Korea, Brazil, Chile and the United States. U.S. entities include The Smithsonian, Carnegie Institute of Science, Harvard, University of Texas, Texas A&M, University of Arizona and University of Chicago. Each group’s time on the telescope will be proportionate to their investment.

The GMT will be placed in the Andes Mountains in Chile and will be the largest telescope in the world. It’s resolution will be 10 times greater than the Hubble Telescope, even though it is land based. 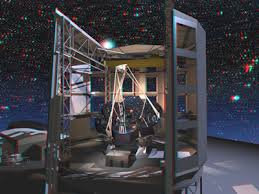 Production of GMT began in 2015 and it should be complete in 2024. The seven 28 feet diameter mirrors, the largest in the world, are being created under the football stadium at the University of Arizona in Tucson. The production of each mirror takes six years from start to finish and costs $26 million.

The mirrors begin as optical glass,  processed in Japan by the Ohara corporation. They use a special sand found in Japan and a few other places around the world. It takes 20-26 tons of glass for each main mirror.

The glass is brought to Tucson, placed manually and then heated at 2150 degrees for three days.  The “oven” is a spinning heater which evenly distributes the glass.  This saves most of the grinding required with other mirror processes. 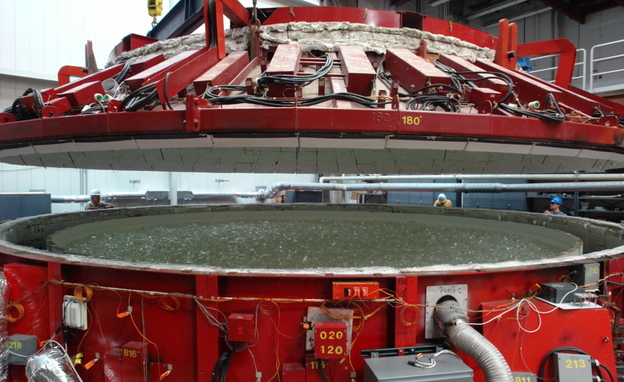 It takes the large mirror three months to cool. 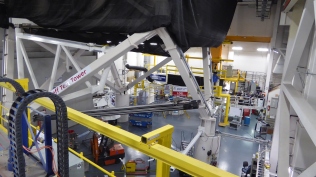 Approximately five hundred actuators are installed on the reverse side of each mirror so it can be moved and flexed to stay focused while in use. There are over 4000 actuators  in all of the mirrors combined. 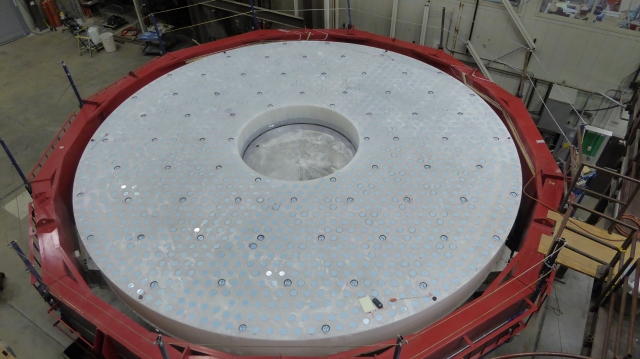 Finished mirrors weigh 24 tons and will be shipped individually by truck to a port city and then by ship to South America.  Trucks will again be used to take the mirror up to the telescope site.  A final aluminum coating will be applied at the Chile observatory. 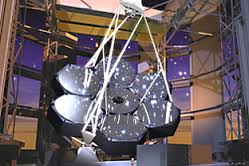 As an aside, a European Consortium is also building a telescope in this size range. They are using the different tact of a multitude of smaller mirrors working together rather than seven very large ones. Only time will tell if one approach is better than the other and in what ways.

Telescopes can certainly see some interesting and beautiful sites. But, after we came home from the Mirror Lab we got to see a beautiful sight right in our RV park, right here on Earth!  Check out the sunset!