The Other Road Between Phoenix and Tucson

The main route between Phoenix and Tucson is 115 miles of  busy Interstate 10. A few dozen miles east of I-10 is the alternative – the slower, two lane, scenic Highway 79. The historic town of Florence we visited last week is along Highway 79.

While there we learned about Tom Mix, a silent movie star who was the iconic western actor of his generation. He appeared in more than 300 western films. He was “King of the Cowboys” before Roy Rogers was. His blazed face partner was Tony, the first horse to be a real movie star.

Along Highway 79, about 50 miles north of Tucson, is a roadside memorial to Tom Mix. 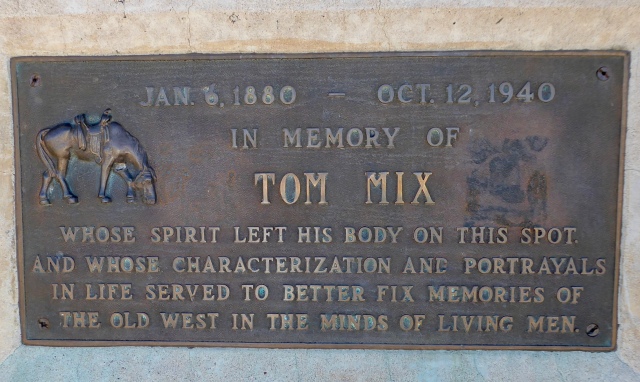 Mix crashed and died here after traveling too fast and missing a detour.  He survived the initial accident but was killed when his large baggage trunk toppled over on top of him, breaking his neck.

Further north we found memorials and monuments of a different sort.

A bit east of Highway 79 is St. Anthony’s Greek Orthodox Monastery. Several people had suggested we visit the monastery but Randy was reluctant because he didn’t want to put on long pants, shoes and socks, and long sleeves. He has this thing about wearing shorts in the Arizona sunshine!

I wore the required long skirt, shoes and stockings, and long sleeved blouse but my blouse was apparently not modest enough as I was given another to wear over it along with a head scarf.

The monastery is an active community of monks living, working and worshipping on the grounds. They allow visitors in some areas.  St Anthony’s was established in the Arizona desert by six monks in the summer of 1995. They were sent from Holy Mountain of Athos in Greece which maintains a direct link from early Christianity. Holy Mountain consists of a few thousand monks in 20 independent monasteries and numerous hermitages around the world.

St. Anthony the Great lived from 251-356 and was the “father of monasticism.” The main church is dedicated to him. Other churches and chapels on the grounds are dedicated to other saints.

The inside of the main church dedicated to St. Anthony 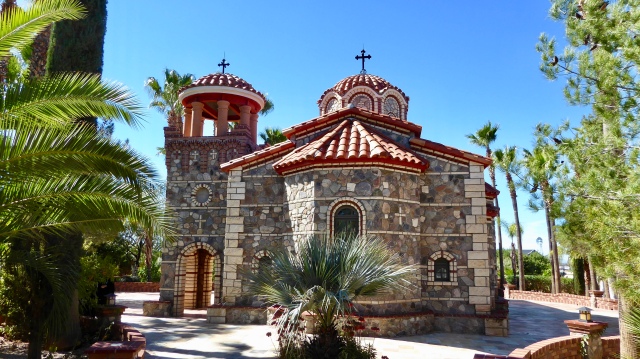 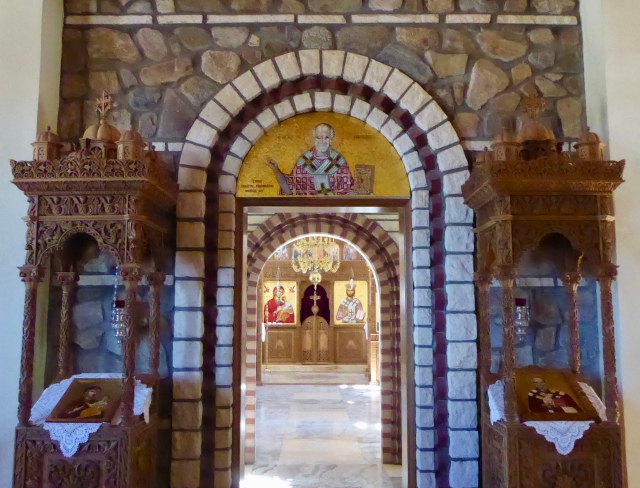 Looking into the interior of St. Nicholas’ chapel.

Workmanship and detail throughout the monastery are stunning, notice the ceiling! 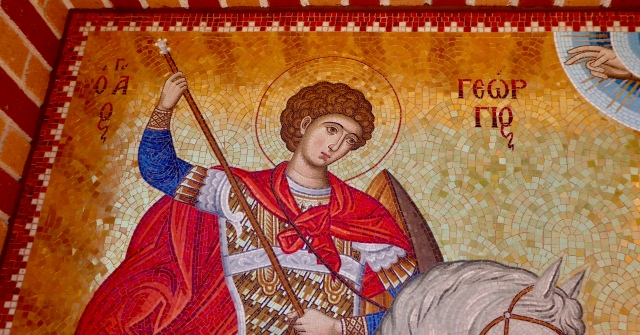 Altar areas are behind curtains and not viewable by visitors.

The stained glass window and picture were positioned to allow light to shine upon the saint.

Monks typically stand for services in these stations along the perimeter. They are able to sit if they grow tired.

Currently about 40 monks and novices follow a schedule of prayer and work on the monastery grounds. Works include tending the gardens, vineyards, and orchards, woodworking, construction and food preparation. Other tasks are related to hospitality as Orthodox men and women from around the world are able to spend a few days at the monastery for spiritual growth.

The top bar has the inscription “Jesus the Nazarene, King of the Jews.” The second is for Jesus’ hands. The third, and lowest bar, was his foot-rest. The third bar is sometimes shown slanted because the thief crucified on Jesus’ right repented and was saved – thus that side points toward Heaven. The thief to Jesus’ left did not and he went down to Hell. 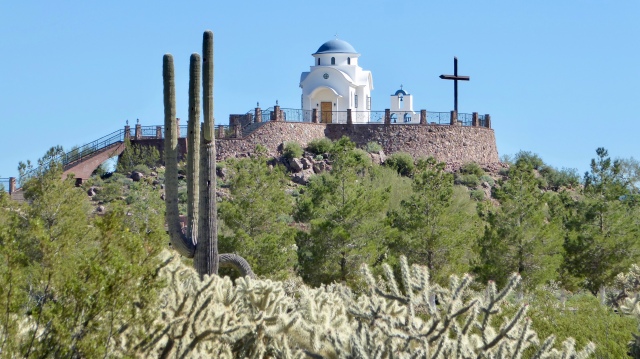 Even with the dress code requirements, those who had encouraged us to visit the monastery were correct. It was well worth the drive and inconvenience!  St. Anthony’s Greek Orthodox Monastery is a beautiful and interesting place.

7 Responses to The Other Road Between Phoenix and Tucson