The Far Back, The Near Back and The Present 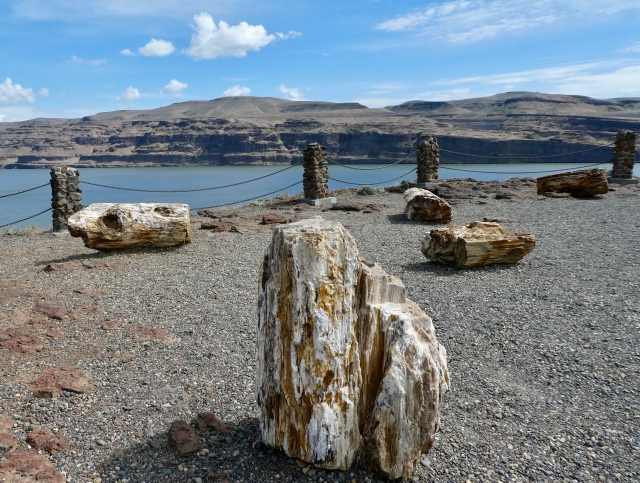 We were too early in the season for the Visitor Center but we did enjoy the petrified wood and displays nearby.

The Vantage Petroglyphs were moved to this site near the Visitor’s Center.   Their original location is under water in the nearby Wanapum Reservoir.

The petrified wood was exposed through Ice Age flooding, erosion and human activity.   The Wanapum and other local Native Americans used it for arrowheads and other tools.

Two miles away, a trail winds its way by dozens of protected petrified wood specimens.

A view through the protective screening.

Chief Yellow Wolf said, “We have always been here.  Nature placed us in this land of ours.”

The native people who roamed seasonally for centuries on the high plateaus that became  Idaho, Montana, Washington and Oregon called themselves the Nimiipuu.  We know them as the Nez Perce. 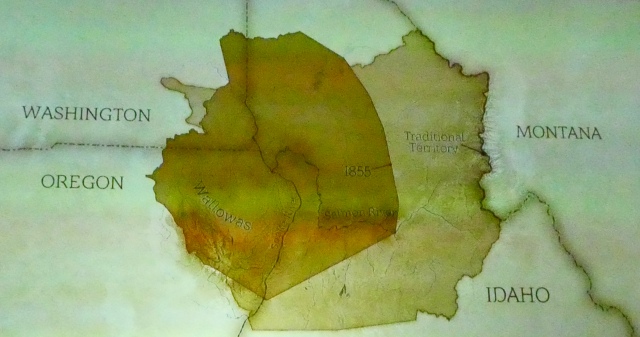 Originally friendly with white visitors, the Nez Perce worked with the federal government.  In 1855 a treaty established the reservation covering much of their native lands.   Unfortunately, white men weren’t satisfied to respect treatied lands and some 18,000 encroached on Nez Perce lands.

A second treaty (in 1863) reduced Nez Peace lands to one tenth of the 1855 allotment.    Resentment, skirmishes and atrocities disillusioned a segment of the Nez Perce and war erupted in 1877.   These Nez Perce, led by chiefs Joseph, Looking Glass and Toohoolhoolzote, won the war’s first battle in June 1877 at White Bird.    They led their people on an 1100 mile odyssey trying to avoid troops commanded by General Oliver Howard.  The war’s last battle, in October 1877, was at Bear Paw in Montana.  The Nez Perce who fought the government were sent to reservations throughout the west.

Areas where the Nez Perce lived, fled and battled are now part of the Nez Perce National Historical Park.  There are 38 sites in four states.  An auto tour totals more than 1000 miles.  You can’t live and travel in this part of the country without happening upon Nez Perce  battlefield and historical sites. 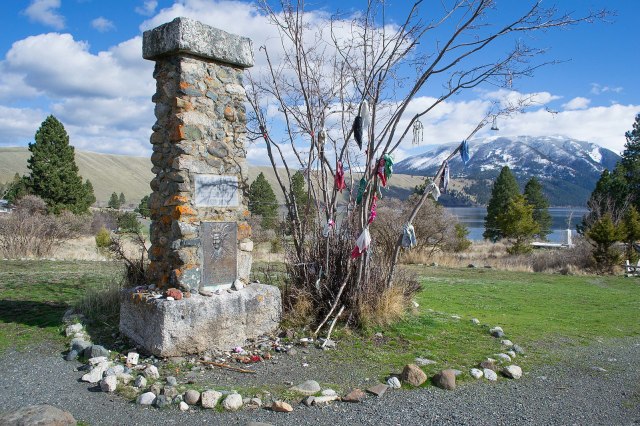 We’ve seen the Heart of the Monster near Kamiah, Idaho and heard the native creation story. 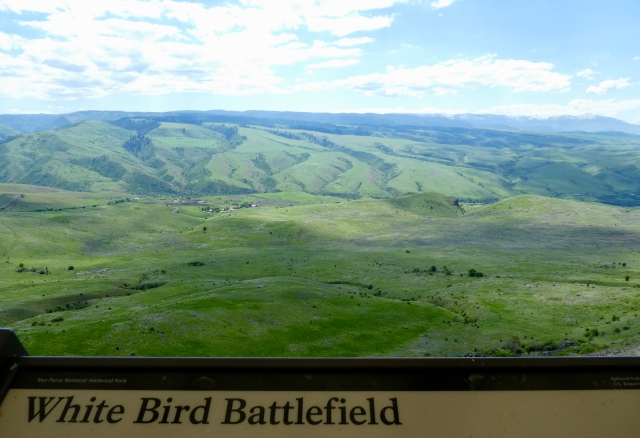 And we’ve driven by the White Bird Battlefield numerous times as we’ve gone up and down White Bird Hill on Highway 95 in central Idaho. 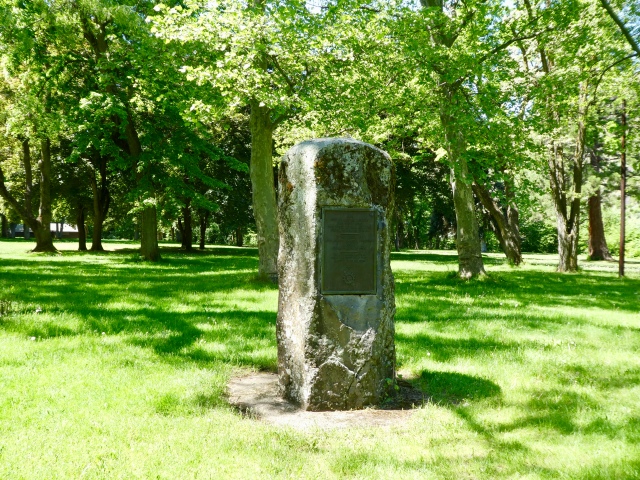 The Visitor’s Center for the Nez Perce Historical Park is near Lewiston, Idaho. It is on the site of the former Lapwai Mission established in 1836, long before treaties and war. 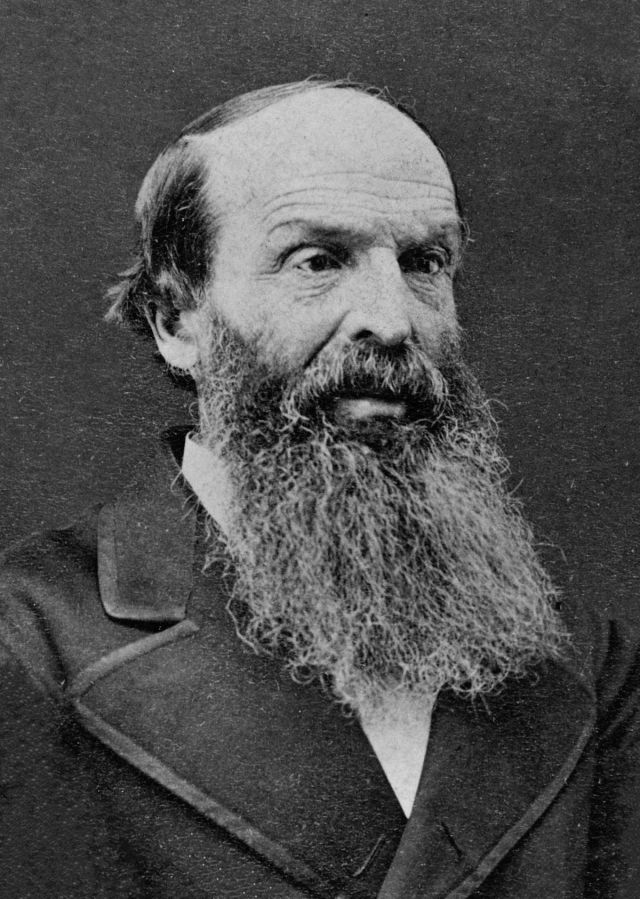 Henry Spalding and his wife Eliza came to establish the first school and church in Idaho.   They traveled west with fellow Presbyterian missionaries Marcus and Narcissa Whitman.  It might have been an interesting trip because Henry had proposed to Narcissa first.

The foundation of the Spalding home and remains of their fireplace are visible.  The Spaldings left the Lapwai Mission for the Willamette Valley after the Whitmans were massacred in 1848.   (The Whitman mission site sits near present day Walla Walla, Washington.)

Henry Spalding returned to the Lapwai Mission later in life and served as a teacher.   In his last years, he was cared for by the Nez Perce and buried on site.  Eliza’s remains were brought from the Willamette Valley in Oregon and placed with her husband.

There are other interesting buildings on the Lapwai mission site.   This Indian Agency House, built in 1862, is just yards from the former Spalding home site. 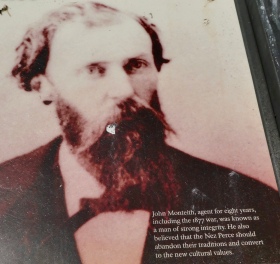 This was the Indian Agent’s Residence.  Agent John Monteith served for 8 years, including the difficult year of 1877.

The nearby Spalding Presbyterian Church began services in 1876, well after the time of Reverand and Eliza Spalding.   The Spalding influence on the Nez Perce was great.   This building is still used for Sunday services. 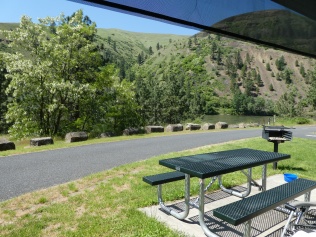 To explore the area, we stayed at McKay’s Bend RV Park east of Lewiston on Highway 12.   The campground land is owned by the Nez Perce and jointly managed by the BLM and Idaho Fish and Game department.  We had been told about the park numerous times.  We came on a Sunday afternoon since there are only 14 sites (full hook-up) and no reservations.  (There was also only 1X internet service so we were glad it was a short stay.)

We met camp-host Norm,  age 84, the man who successfully balances three master agencies.  He and his wife began hosting at McKay’s Bend full time in 2003.  She passed away in 2010 and he stayed on.  He enjoys having a purpose and keeps the park looking beautiful all by himself.

There are lots of bunnies! 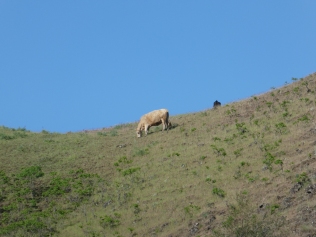 There are lots of cows on them thar’ hills –  and we heard coyotes. 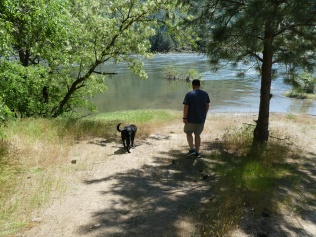 And there is a wading pond for Elko – otherwise known as the Clearwater River.

Elko helped Randy rest up before he goes back to “work”. 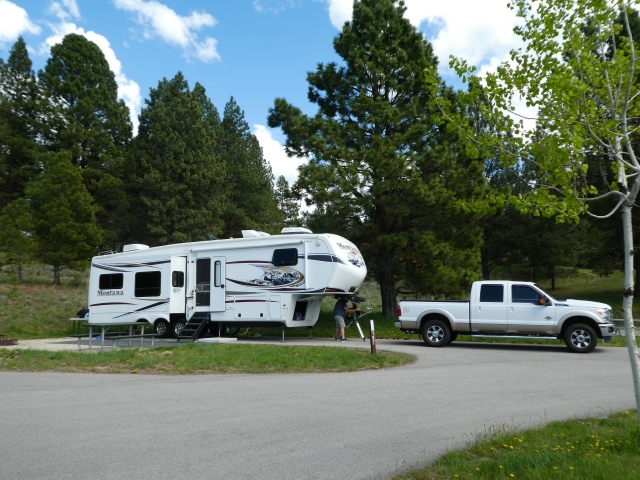 We have arrived at site 197 in Ridgeview Campground at Lake Cascade State Park in Cascade, Idaho.  This will be our home until July 9th.  Randy will serve as maintenance host on the east side of the lake.  I’m not sure if I’ll be his gopher or find something else to do – or maybe nothing at all 🙂

July 9th, we will move to the west side of the lake to camp-host at West Mountain campground until the end of the camping season.   If you are in the area, please get in touch!

3 Responses to The Far Back, The Near Back and The Present