Our Day in Santa Fe 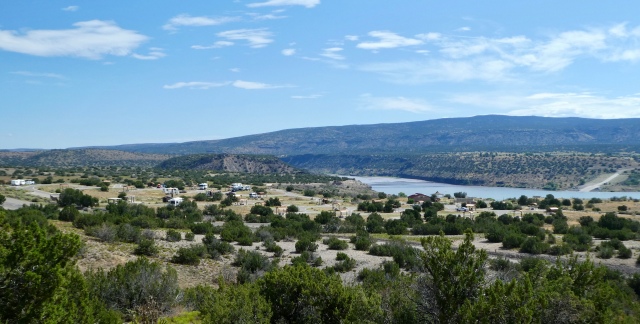 Our campground is in the Cochiti Recreation Area, about 45 minutes from Santa Fe. 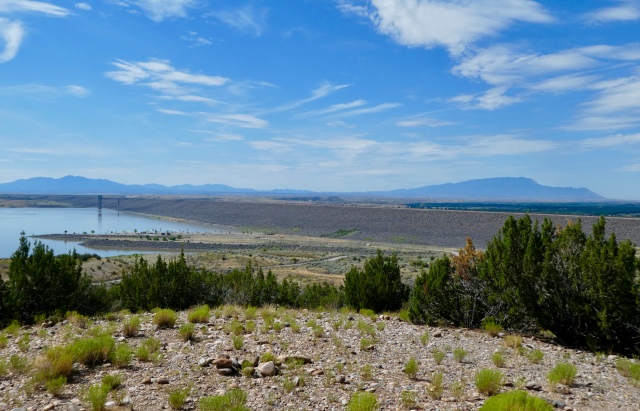 The Corps of Engineers usually (maybe always) build campgrounds at their dam sites and they are usually quite nice.   The Cochiti Dam is one of the 10 largest earthen dams in the United States with more than 65 million cubic feet of earth and rock. 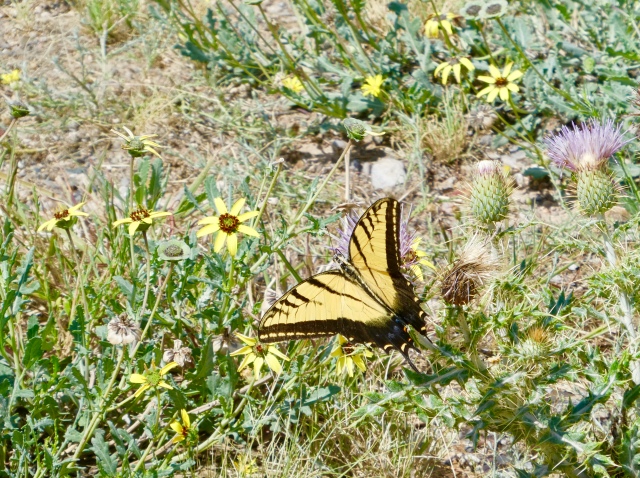 We have enjoyed pleasant wide open spaces to walk. 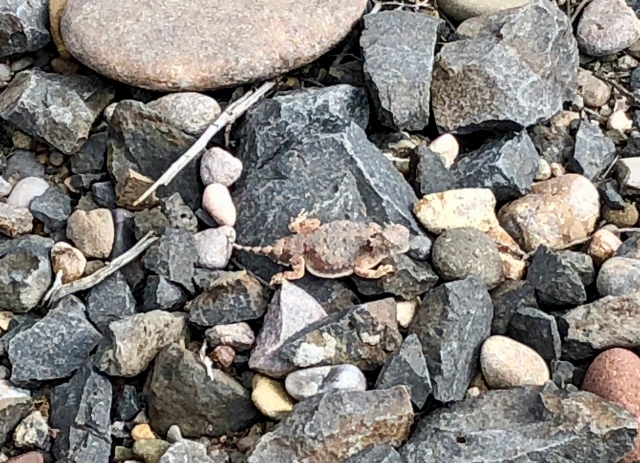 Picture isn’t great because I took it on my phone – but nice toad! 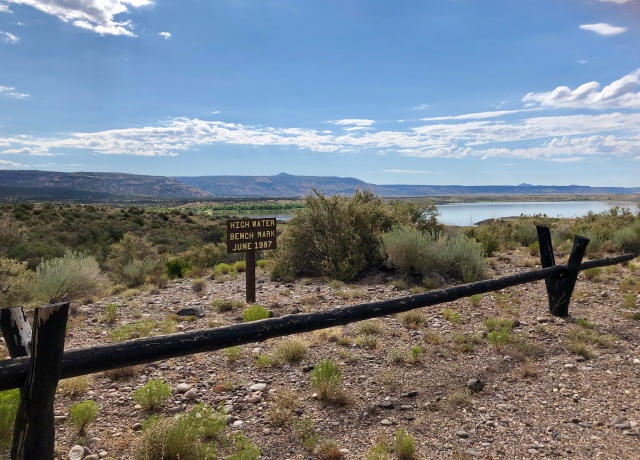 We met a woman who said she remembered the storm that more than filled the reservoir! 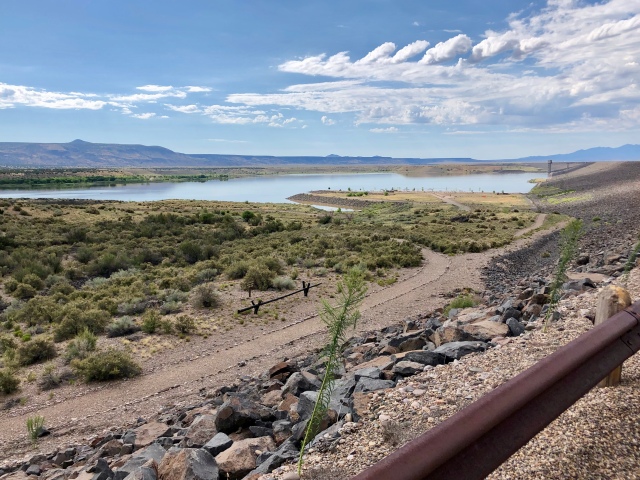 This is from the dam road on top, you can see how far up the water came above normal! 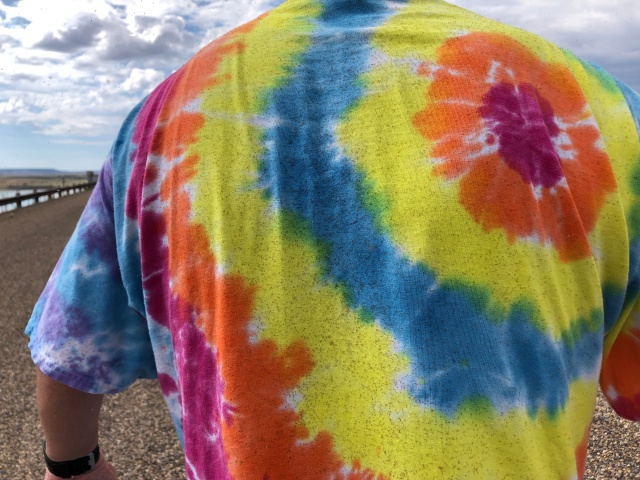 The walk was great until we were swarmed by gnats.  They even came after me and usually Randy takes all the bugs for both of us! 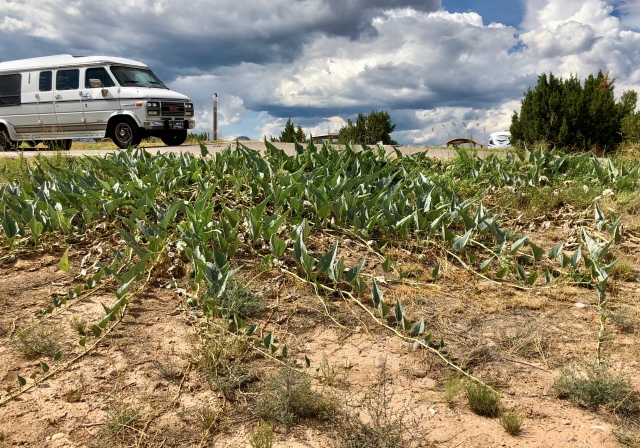 The campsite next to ours has a monster volunteer watermelon plant heading our way!  The watermelons are about 4″ spheres at this point. 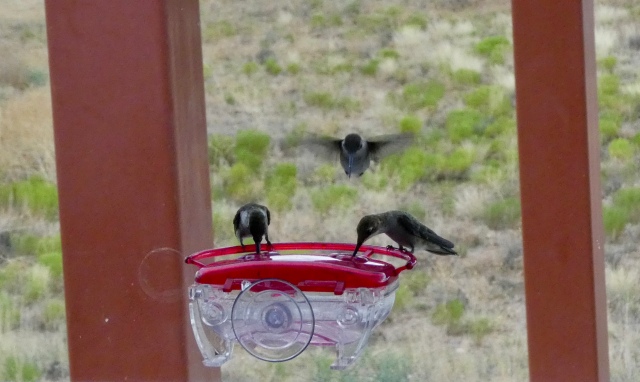 There are a jillion hummingbirds and we fill our little feeder at least daily!  Here we had two on the feeder and one impatiently waiting.  We’ve had as many as six competing for two spots.

But on to our day in Santa Fe…Today we headed into town for one of our favorite tourist activities – a food and history tour! 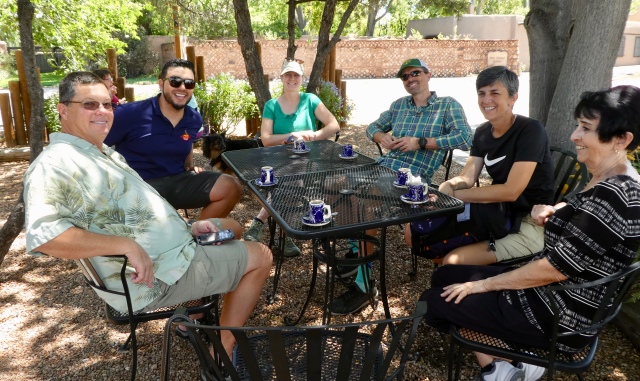 These are our tour mates and leader. 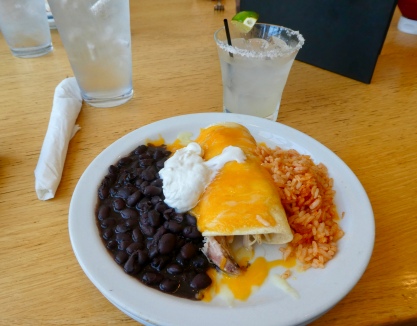 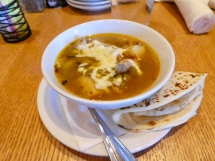 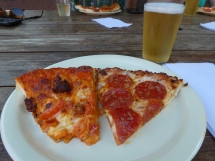 We enjoyed a chicken enchilada, with options to add our own red, green, or christmas (red and green) sauce, with a delicious margarita.  Then we walked to our next venue and had a small bowl of Green Chili Pork Stew.  Third course was New Mexico infused pizza. 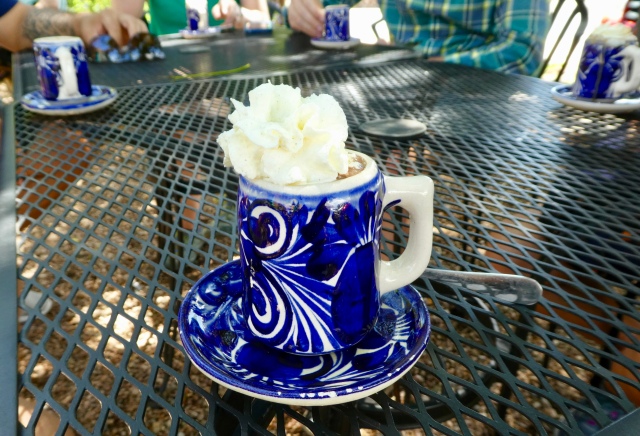 Dessert was sipping chocolate. We had a variety to choose from – several with spices and chilis. 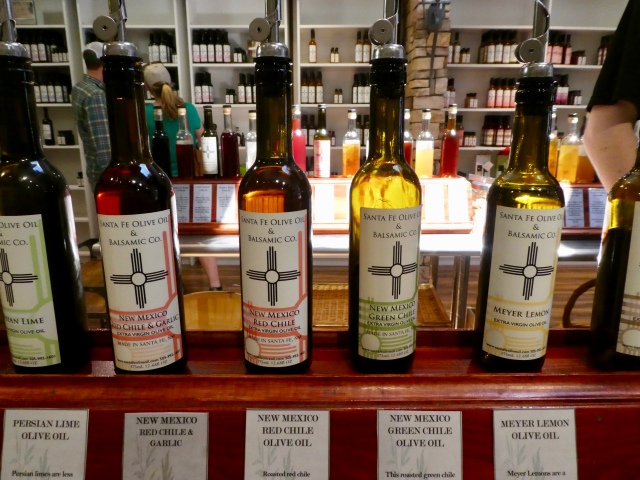 Along the way we also stopped at an Olive Oil and Vinegar store.  They had a large selection which included some New Mexico flavors.  We bought Green Chili Olive Oil. 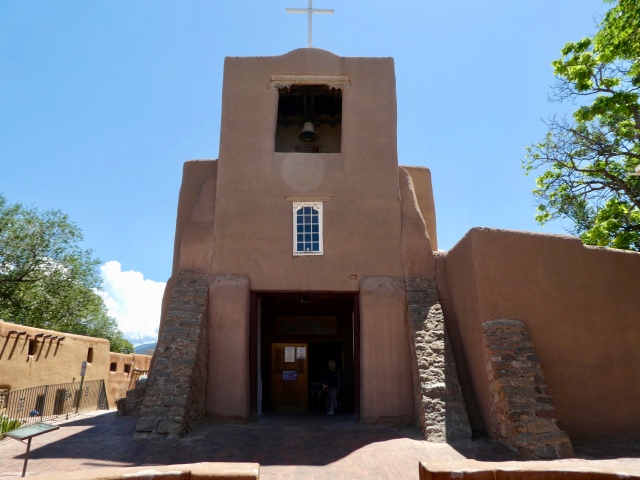 Our history stop was at San Miguel Church, the oldest church structure in the United States, built in 1610. 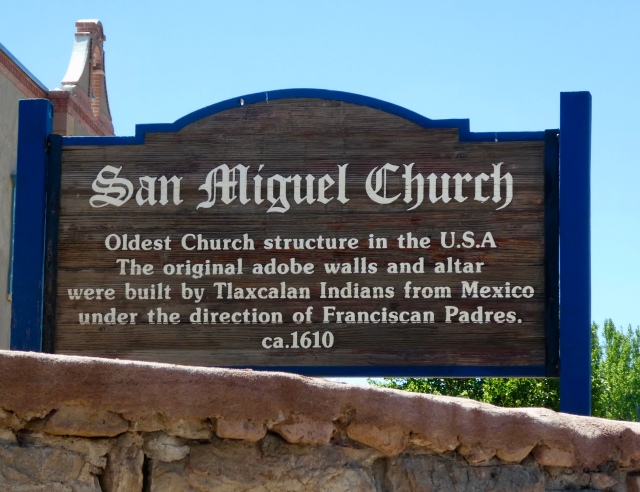 The original adobe walls still exist under the stucco exterior.  The roof burned during the Pueblo Indian rebellion against the Spanish in 1680 but was rebuilt when the Spanish regained control in 1694.   The building had several additions over the years including the altar screen in 1798.  (The altar area was reconstructed in 1955.) 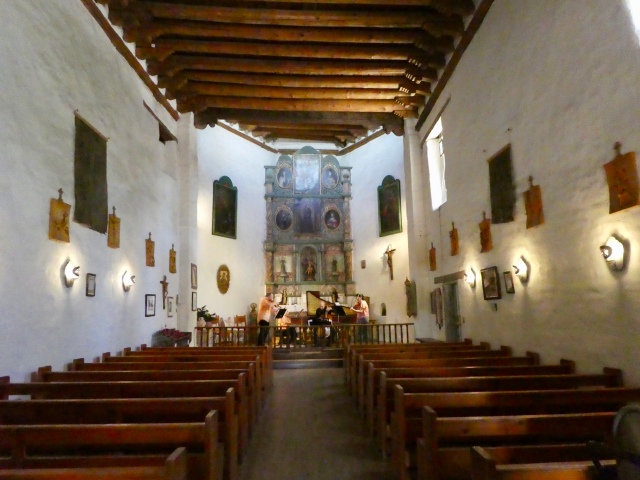 A bell tower was added in 1848 and a mostly copper 780 pound bell was installed.  The bell itself has history back to 1356 when the Spaniards were fighting and losing to the Moors.  The Spaniards cast the bell in honor of Saint Joseph in a spiritual plea for his help.  The Christian Spaniards defeated the Moors. 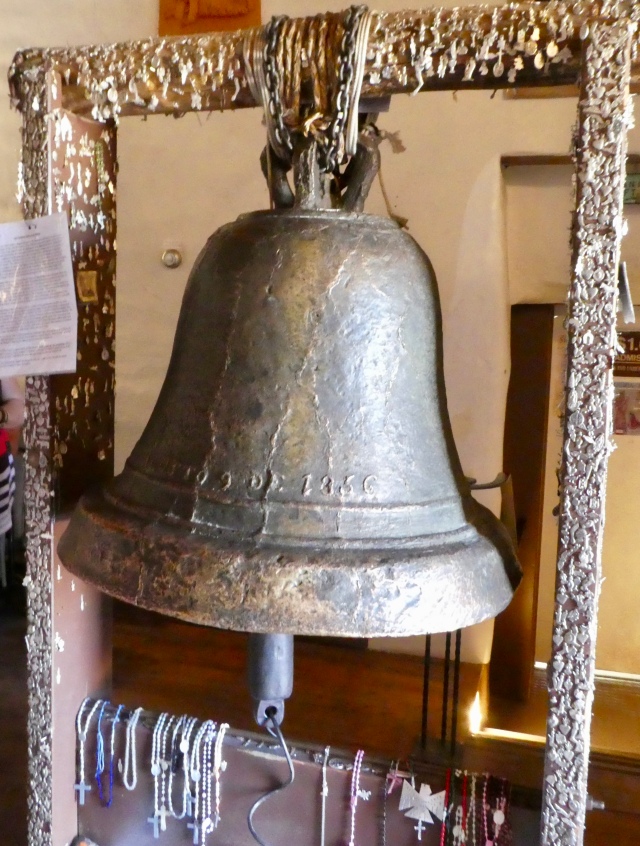 The bell made its way to Mexico as Christianity spread.  Señora Loretta Ortiz purchased it in 1812 and a family member brought it to the San Miguel Mission in 1848.  A strong storm brought down the bell tower and the bell in 1872. 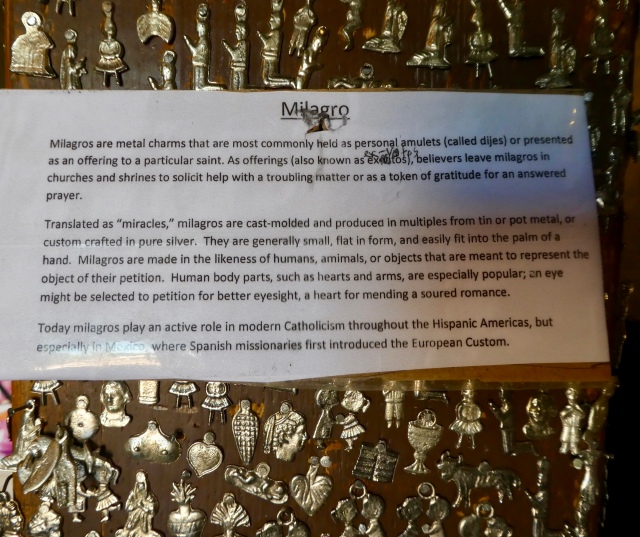 The structure displaying the bell is covered with milagros, small charms given in gratitude for answered prayer or to solicit help with a troubling matter – often represented by the shape of the charm. 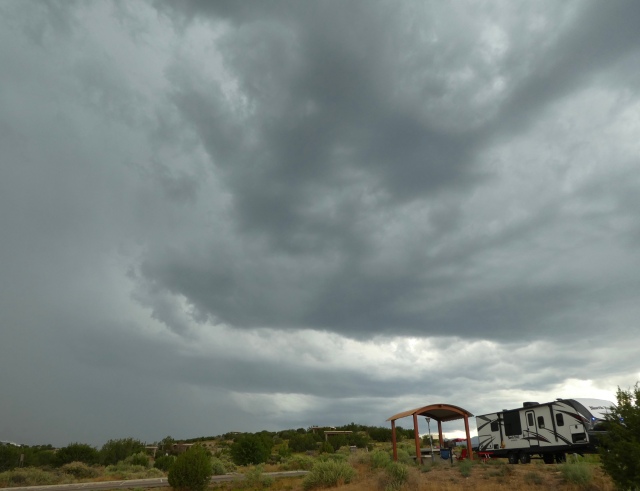 We came back home and enjoyed another summer monsoon in the southwest.  A couple hours of wind, rain, thunder and lighting have been an almost daily event.    We love it!

5 Responses to Our Day in Santa Fe