Gravel parking lot campgrounds are not our usual preference but this campground in Farmington had purpose.   It had full hook-ups (water-sewer-electric) so we could wash clothes – something we can’t do with water and electric only sites found at most state parks.  It also had 50 amp electric so we could run both air conditioners when it was hot.  Then we had all the RV issues for Handy Randy to deal with and the very nice owners allowed us to receive repair part shipments in their office.  Some will and some won’t.

When we started on this trip we had a water crisis,  incompatibility with our new house satellite receiver with the older satellite dish in the trailer, and torn vinyl from a rock lodged under our kitchen slide.    Randy was pretty frustrated that so many things happened all at once and wasn’t sure trailer life was for him anymore!

The torn vinyl required only glue and Randy fixed that right away.  It isn’t perfect but you wouldn’t see it if you didn’t know it was there.  It is the second time this has happened over the years.  New flooring may be in our future but we will have to decide if we want to replace the carpet too.

While still in Flagstaff, Randy found the water part he needed on Amazon and ordered it sent on to Farmington.  In the meantime, he finally heard back from an RV Repair store locally and was able to get the part there too.  The water flowed well again and we had a spare valve coming for the inevitable next time.

The most problematic issue were the needed satellite parts.   It was fortunate that the satellite was the least important as far as being a real problem.  The background is that we upgraded our DISH receiver when we moved into the house with the assumption that we would move the receiver and one wireless Joey into the trailer when we traveled.  People do it all the time.   But it didn’t work.  Randy spent time researching himself and conferred with DISH technical support.  What he learned was that our trailer satellite had an old LNB system and needed an upgrade to work with the new receiver.

There isn’t a DISH dealer anywhere in Flagstaff, Winslow or Holbrook but there is a small “mom and pop” outlet in Heber, Arizona.  The “mom” understood the problem and what we needed.  She didn’t know if they had the parts on the truck or if she’d have to order them in the next day.  That seemed to go well!  Randy was willing to drive the three hour round trip to get the parts and be done with fixing things!  She didn’t call so we called her.  She said they weren’t on the truck but should be delivered the next day, she’d call when they were in.  She didn’t call so we called her.   She said she had called too late and it now wouldn’t be delivered until Friday.   We were headed to New Mexico on Friday so we were done with the Heber solution.

There was no place to purchase the needed electronics in Farmington but Randy was able to order them out of Detroit and have them shipped second day air.  We received them perfectly.

Randy spent some time rewiring things and finding the satellites.

We have satellite TV through the wireless Joey in the bedroom!

We were watching our DISH TV for the first time on this trip, feet up, with celebratory wine coolers!

That really should be the end of this post, but there’s more.  There’s always more for Handy Randy!

Days ago our toilet seal stopped holding water in the bowl.  That happens and sometimes it needs a coating of petroleum jelly and sometimes the seal needs replacing.  The jelly didn’t work so Randy had a three pack of new toilet seals sent to the campground in Farmington.   Thank you Amazon Prime! 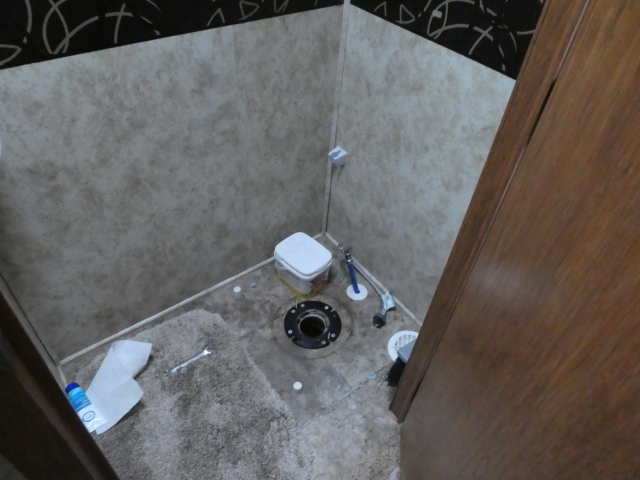 He was working on the toilet when I laid down and took a nap.  I woke up to this! The toilet was gone!

I found Handy Randy outside working on the toilet and he declared it broken.

We didn’t have time for Amazon to send us a new one before we were moving on so our choices were to find one in Farmington or reroute our trip through Albuquerque.

Fortunately we were able to locate a porcelain toilet, close to what we had before, near Farmington.  We bought it the next morning. 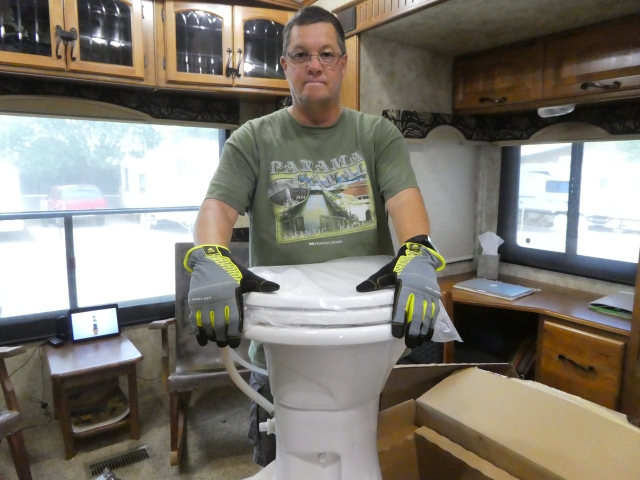 Have new gloves and new toilet…Go!!!

It took Handy Randy about 10 minutes to install our new toilet.  We don’t even care that it is white instead of bone. 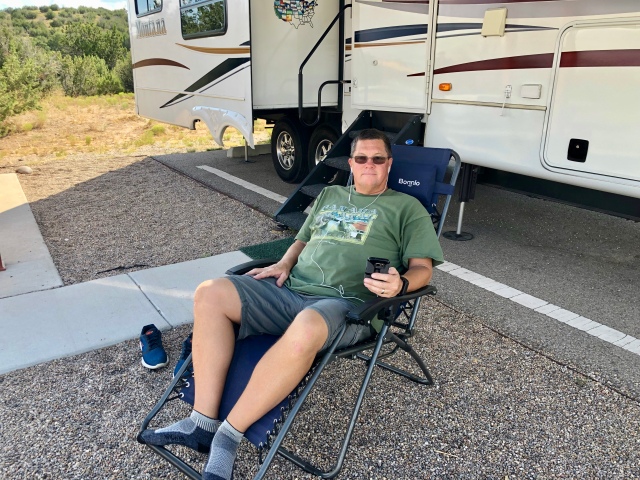 We moved today and got settled in our new place near Santa Fe.   We could not even begin to do this trailer life stuff without Handy Randy being so capable.  We’d be in the shop all the time, or would have given up long ago.  He is blessedly gifted as a handy guy.  Hopefully we can enjoy the rest of this trip with everything staying fixed!

Oh, did I say everything’s fixed…there is one more thing….A minor crack  appeared in the desk top a couple of years ago.  It has split and come together repeatedly as we have moved within different humidity levels.  It has been a cosmetic problem bothering only me.    Since we now live in the hot dry desert, the minor crack is now a cavern on the surface of the desk.  It’s a very good thing that Sun City Grand has a woodworking shop and that Handy Randy has interest in playing there this winter.