We almost didn’t go to Aztec Ruins.  We’d seen a bounty of ancient puebloan sites recently and lacked motivation.  (We experienced the same with mining sites a few years ago.)  Yet Aztec Ruins was just a few miles away, and it is a national monument, and a UNESCO World Heritage Site, so we went…and it was very nice! 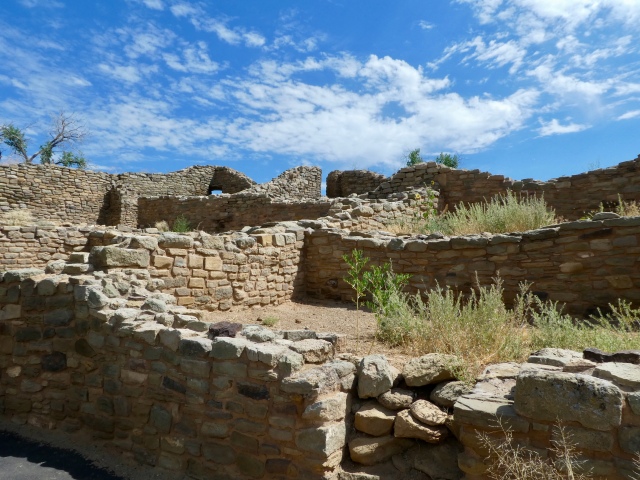 To be clear, the Aztecs were not here.  Anglo settlers named the area centuries after ancient puebloans occupied the site from the late 1000s to the late 1200s. 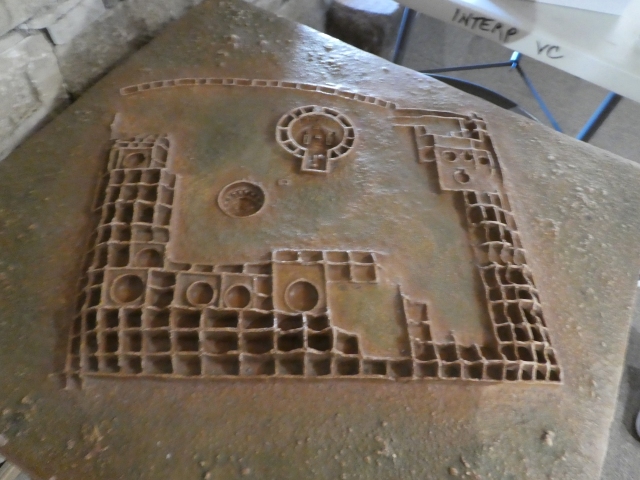 This was a well planned community overlooking the river.   This model shows only the west side ruins.  Planners and early inhabitants likely came from Chaco Canyon (55 miles south) as features of architecture, ceremony and pottery were similar. 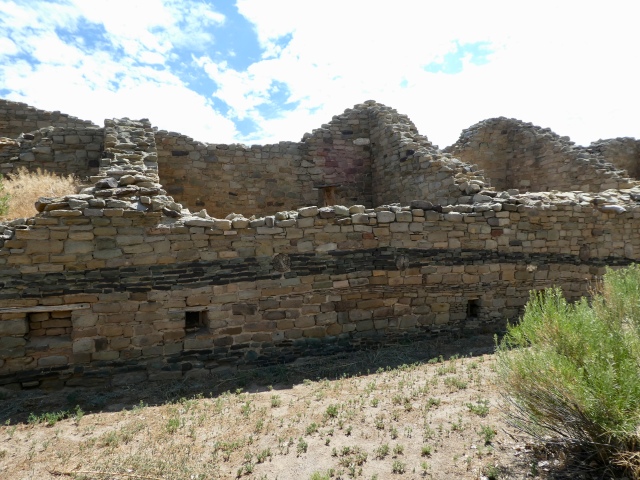 Much care was taken with design and construction.  This wall exactly aligns with sunrise on the summer solstice and sunset on the winter solstice.  The purpose for the green sandstone band is unknown.

The community was built over a 200 year span with later builders following the earlier master plan.  Stone work patterns changed over time.

Geologist John Newberry is the first recorded visitor to the ruins in 1859.  The west ruins were in good shape with walls 25 feet tall and rooms undisturbed from centuries before.

Anthropologist Lewis Morgan investigated the site in 1878 and estimated 25% of the wall and room stones had been taken by area settlers for building materials.  A period of extensive looting occurred until they were privately owned in 1889.

In 1916 New York’s American Museum of Natural History began sponsoring  excavations.  The Great Kiva was reconstructed under their supervision.

The ancient puebloans transported stone and wood from long distances to build the Grand Kiva, a religious building central to their community.  Kivas vary in size but consistently have a central fire pit, four pillars and floor vaults.

Today the National Park system oversees the security and preservation of the site.   Preservation techniques include reburying rooms and replacing mortar and missing stones  It is estimated that 90 percent of the current masonry is original.

Moving from man made history to geologic history… 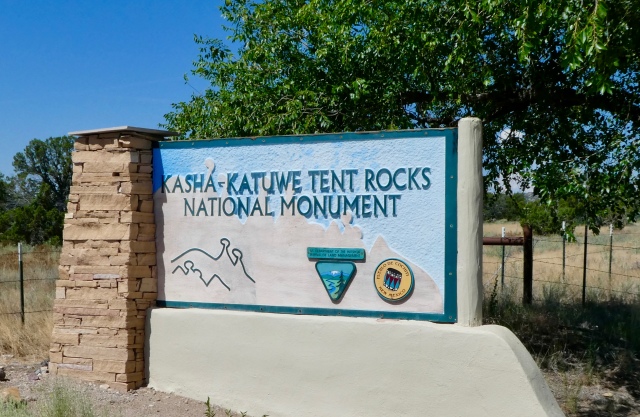 Kasha-Katuwe Tent Rocks National Monument is managed by the BLM with the Pueblo de Cochiti people.   (The Cochiti people joined other puebloan groups in driving Spaniards from the area in 1680.) 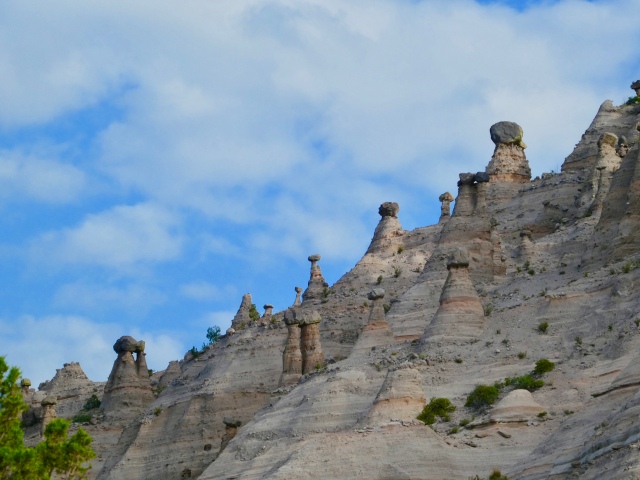 Later eruptions spewed harder rock.  Surface boulders allowed tent rocks to form underneath as the caps protected the softer pumice and tuff.  Water and wind did their parts. 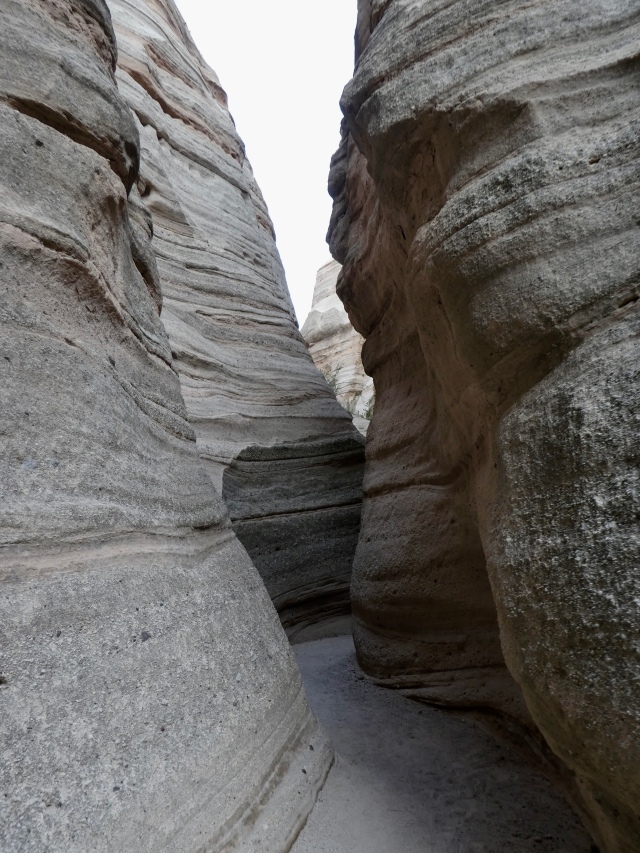 There is a nice slot canyon to hike through on the way up to the mesa. 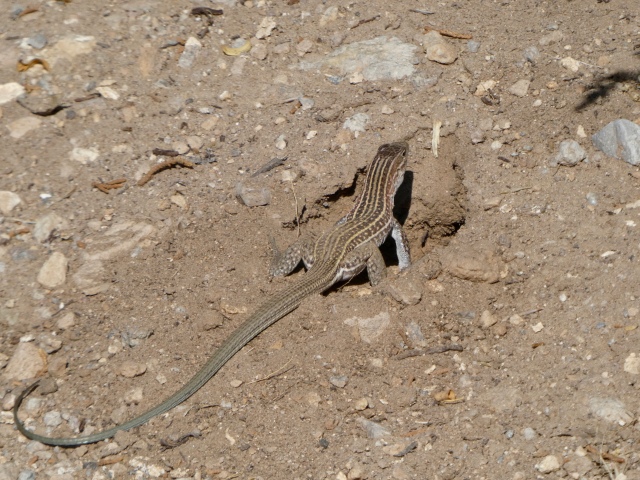 Hiking at altitude was difficult and we liked any excuse to pause.  This guy went across the trail ahead of us and proceeded to dig his tunnel entrance while we watched.

We made it to the top!

Randy walked to the very point because of course he does that. 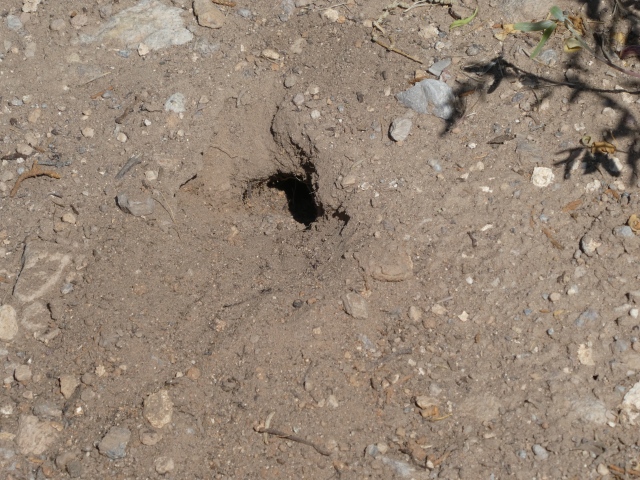 We checked on our friend on the way back down. We saw his work but not him.

We saw a cave on the way down, thought to be hand carved with sticks and sharp stones between 1200 and 1540.  That is fire soot on the ceiling. 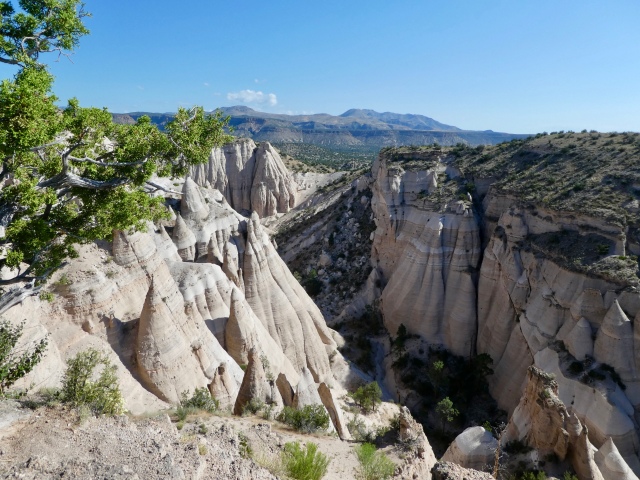 One more picture of Kasha-Katuwe Tent Rocks National Monument because it is spectacular!

3 Responses to NMs in NM