Are you really going to live in that thing?

We have received several question about our RV.  I thought I would give a quick review on how we decided to go with a truck/fifth wheel combination.

Like many families, we have been tent camping for a long while.   As the years went by, and sleeping on the ground got uncomfortable, we decided to get a pop-up trailer.  That didn’t work out very well for a variety of reasons.  It turned into a nice boat that we enjoyed for 24 years.  We just sold it this fall.

In 2001, we bought a small Keystone Laredo fifth wheel.  We loved that trailer and it worked great for trips up to a week or 10 days out.  As we though about going full time, it became clear the Laredo was not the answer.  We started researching what we really wanted.

We have been visiting the Boise RV Show for many years.  Serene and I always agreed not share our opinions until we had looked at all the models. Four years in a row we both liked the Montana 3400RL fifth wheel best.  We believed it would fit our needs.

We decided to go fifth wheel instead of the more common Diesel Pusher Class A motor home and towed vehicle.  We will use our truck (or legs and bicycles) as transportation and forego the additional engine, transmission, and additional maintenance. We opted for the more spacious living quarters available in the fifth wheel as compared to a Class A motor home in our price range.

In March of 2012, we bought the new Montana 3400RL. This model has been the number one selling fifth wheel for the last 11 years.  That was a selling point for me since I reasoned that most of the issues have be worked out.  Also, we knew that feedback from their customers had been incorporated in the newer models.  As with any product, there are always slight changes that take place, and I already see a few differences in our 2012 as compared to 2013 and 2014 models. 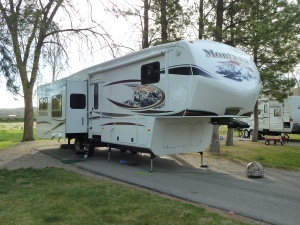 Here is anRV dealership YouTube links for a 2012 Montana 3400RL:

We also bought a new 2012 Ford 1-ton (350) Super Duty diesel crew cab pickup to tow it.  We opted for single rear wheels, as opposed to dual rear wheels.  That allowed us to get a short bed, rather than a long bed.  Turning  and parking are better with a short bed, but it can’t tow as much.  However, it tows the Montana easily. 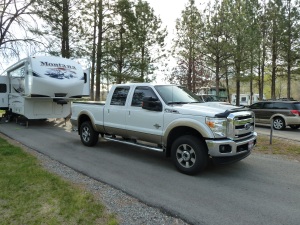 Combined,  these two new purchases were less than any newer Class A diesel floor plan we have seen.  In fact, we haven’t seen a Class A floor plan we like yet.  But we keep looking just for fun.