Sabino Canyon and a Scorpion Hunt

This week we went on the best hike ever! We went to Sabino Canyon, northeast of Tucson, and had a delightful day. We rode a narrated tram 3.9 miles up into the canyon. Not only was the narration pleasant and informative, but did you catch that we rode  3.9 miles uphill!

At the end of the road, we walked up the switchbacks another mile or so and then walked six miles down the Phoneline trail.  Love a hike that is mostly downhill!

The desert scenery was beautiful and this bird sang a lovely song. 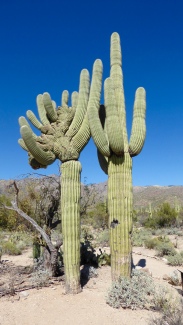 At the end we saw a very unique cactus, called a cristate saguaro. A formation such as this is rare – about 1 in 30,000.

After our long morning of hiking DOWN we went to Lucky Wishbone – one of those local restaurants Randy use to go to when he lived in Tucson as a teenager. He said it tasted the same!

A very different nature experience happened when we went to Chandler (south of Phoenix) for a visit with Randy’s brother, Tim and his wife Yvette. 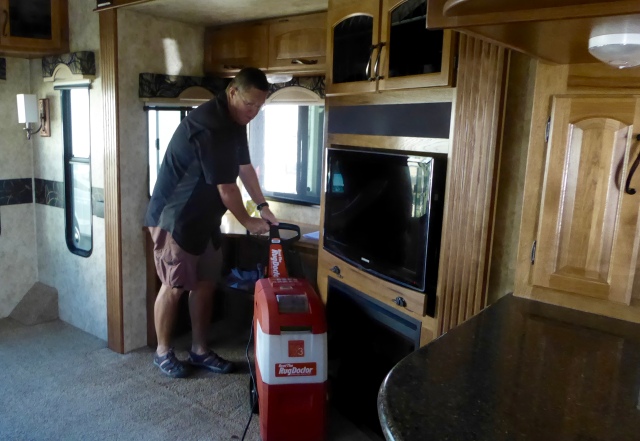 Because the weather was warm and dry,  Elko was going with us, and we anticipated being gone 12-14 hours, we took the opportunity to shampoo our carpets before we left.   Some parts of our life are still very normal!

We enjoyed our day with Tim and Yvette very much. We had a good dinner and then concluded our evening with a scorpion hunt in their backyard.

Randy and Tim had their scorpion lights (black light type) which really make the scorpions glow so they are very easy to see.

The scorpions were on the walls, on the ground and in the palm trees. They found 32 in about an hour! It was surprising that there were so many scorpions out so early, but there has been record heat in Arizona the last two weeks so perhaps that is why. Tim and Yvette have noticed a lot of scorpions in their yard (they live in a subdivision) the last few years. They aren’t sure whether there really are more, or maybe the scorpions were there all along and they just weren’t aware until Tim was stung a few years ago.

It was a very pleasant visit – scorpions and all!

After we told the scorpion story to some new friends here in the Tucson RV park, they too wanted to go on a scorpion hunt. After about 30 minutes of searching the outside wall and nearby ground,  we found only one scorpion. Tucson is generally 5-10 degrees cooler than Phoenix so maybe the scorpions won’t be here until next month when we are gone.  What a shame…