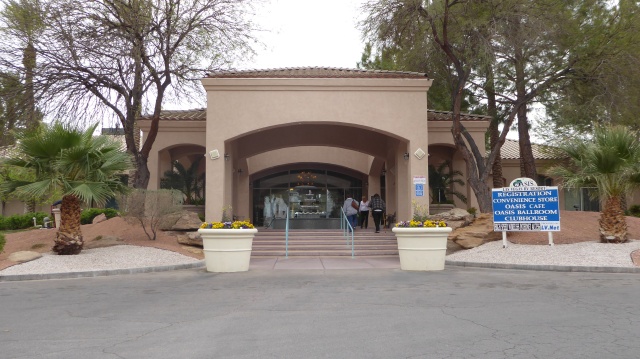 For the past week we have stayed at Oasis Las Vegas RV Resort.  Checking in here is more like checking into a nice hotel! 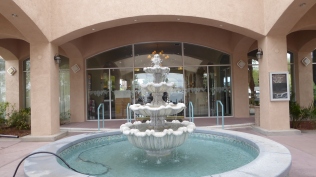 The park is situated between Las Vegas Boulevard and I-15 and is within two miles of The Strip. Our trailer is a “short pitching wedge” from the noisy freeway – literally 30 yards. There is a barrier wall so we hear but do not see the cars.  The noise from the freeway helps drown out the noise from the airplanes overhead because the Las Vegas airport is also close by! 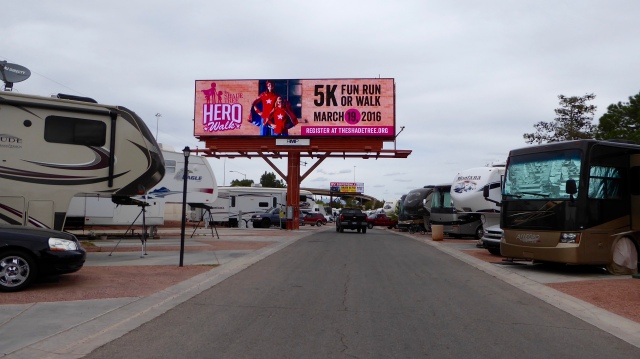 See our Montana trailer on the right.

The spots are tight, but doable, and the really crazy part is this huge lighted billboard 25 feet from our door. 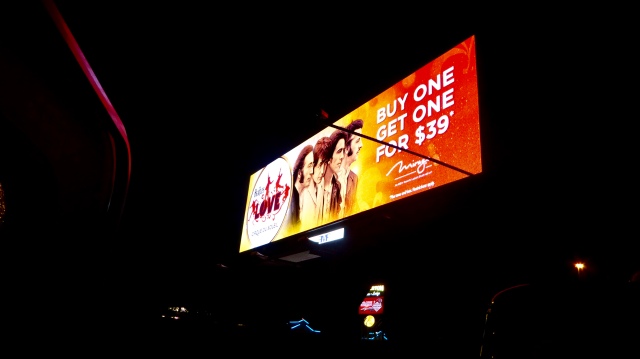 It is really bright at night but we have blackout shades so it really hasn’t effected us. We see some light residue through the skylight in our shower but not enough to bother us.  So, why are we staying in this crazy park for a whole week? 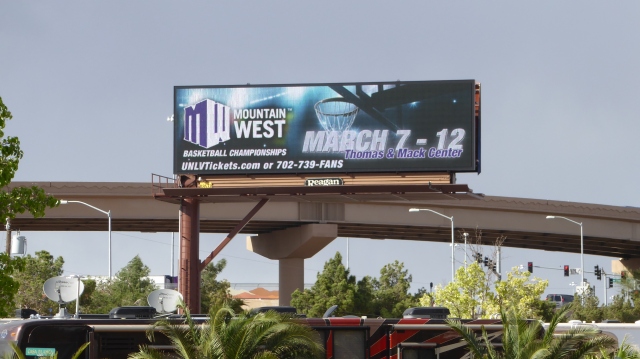 We are here in Las Vegas for the Mountain West Basketball Tournament and wanted somewhere close to the venue with good security for Elko and the trailer since we would be gone so much. 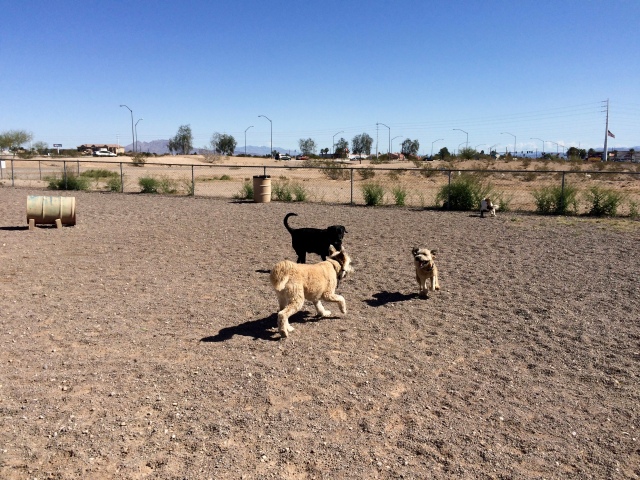 At least there is a Dog Park for Elko to enjoy since he had to spend way too much time alone this week. 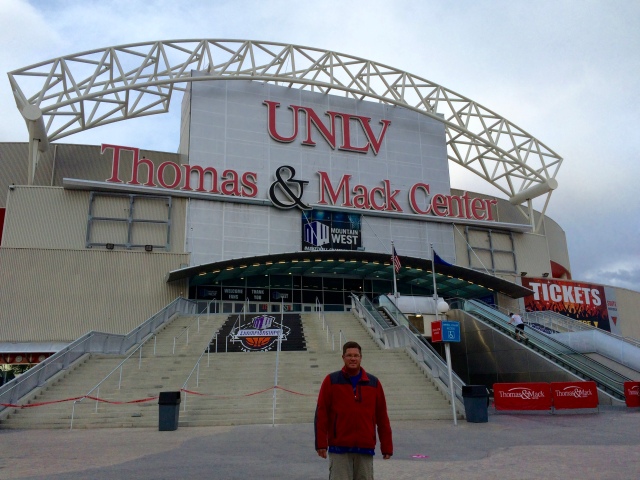 We decided that we weren’t going to try to do anything except the tournament  because 20 games over 6 days is a lot of time away from Elko and the trailer. Actually we only went to 14 of the 20 games – exhaustion (and guilt) settles in, even as a spectator. 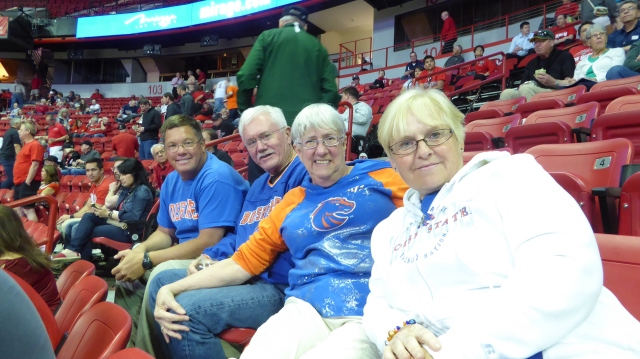 The highlight of the week was when great friends Kent and Pam rolled through town for a couple of days on their way south! They joined us for four games on Thursday. 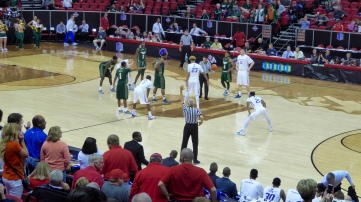 The low points were when both the mens’ and women’s Boise State teams, each seeded #3, LOST their first round games. We were not unique though – the same thing happened to Air Force, San Jose State and Wyoming, although their seedings weren’t as high. 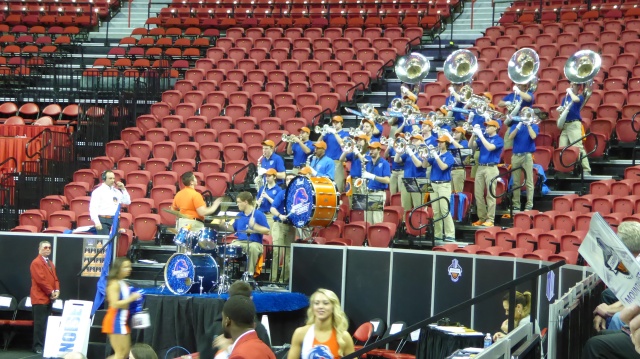 The teams didn’t play great – but the BSU pep band did!

The San Diego State fan base was here in force and so was their Aztec mascot.

We remember seeing him a couple years ago, or a previous incarnation of him, at a December football game in Boise. He was dressed like this even though it was about 12 degrees that night. His fortitude, or foolishness, was impressive. 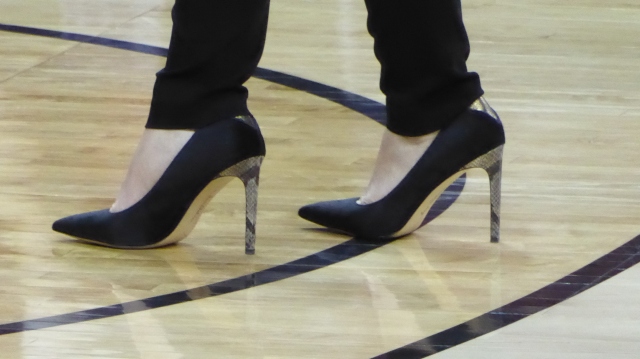 We just had to shake our heads at the women coaches who wear these high, high heels while working the game. Usually the head coaches had more sense but we noticed the assistants wearing shoes such as these over several of the women’s games. Very strange – and probably not very good for the lovely hardwood floor. 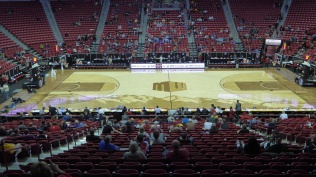 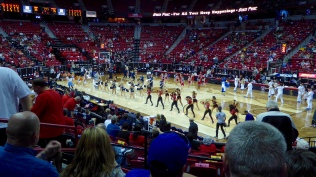 Coming to the tournament was something I had wanted to do for a long time but couldn’t ever justify taking a week off work to do so. Now that we’ve done it, or will have “done it” after the Men’s Championship game this afternoon, we are glad we came but won’t likely come again.   Next time we’ll just stay in Arizona and take in a few more Spring Training games.

Tomorrow we leave here and head west into California. We will make a couple of great family stops in Oregon and Washington before heading back to Boise for April. We count our blessings every single day!