“Peaceably if you possibly can, forcibly if you must.”

“Peaceably if you possibly can, forcibly if you must.” Those were the words spoken by an Indian agent tasking the US Army with gathering sixty Modoc warriors and their families and taking them back to their assigned reservation.

The Modoc leader, Captain Jack, refused to go and the Modoc Indian War began in the fall of 1872.  He, his warriors, and their families retreated into jagged, defensible volcanic formations.   They used caves for homes and built rock walls to further defend the stronghold. 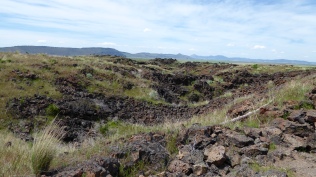 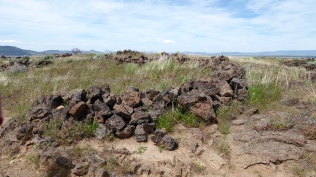 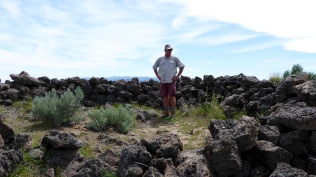 The Army’s contingent was 1000 troops strong yet the warriors withstood their minor and major assaults for six months, until April 1873.  The Modocs only surrendered when their water source to Tule Lake was severed. This area has since been called Captain Jack’s Stronghold.

General E.R.S. Canby was killed in battle with the Modocs, the only general ever killed in an Indian War. This cross, accusing the Modocs of murder,  is a replica of one erected in the years after his death.   The adjoining placard talks about the differing perspectives on the Canby’s death: the perceived murder vs. the attempt to stay and live in one’s home.

The area is vast and over 800 lava tube caves have been found within the 46,000 acre park. Two dozen caves are open for public exploration.   Beth, Randy and I decided to see a few for ourselves. 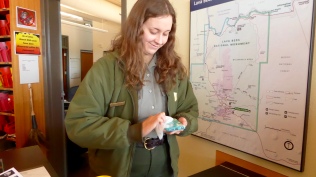 Our first stop was at the visitor center for information and a permit. The ranger quizzed us on previous cave experiences and determined she should clean our cameras and Beth’s and Randy’s boots – mine were new since our last cave exploration.   Beth and Randy had to walk around in stocking feet for a little while.

The rangers are hoping to avoid visitors contaminating the local bats with White-Nose Syndrome.  This disease has been killing bats in eastern caves at an alarming rate since 2006. Only within the last month was the first case of White Nose Syndrome confirmed west of the rockies.  A bat was found with the disease near North Bend, Washington, many miles from the last most western case in Nebraska.

Once cleared, we explored several caves. The Mushpot cave near the visitor center had a ladder entrance and then a nice easy trail with lighting available.

There were a variety of textures visible on the cave walls.

Some caves required climbing down into them and walking on uneven surfaces. Some had different offshoots to explore – or not.

The Golden Dome Cave has a type of bacteria that appears to glitter like gold when exposed to light.

The caves are rated as easy, moderate and difficult due to the terrain, the elevation change and the height of the tube as you pass through the cave. 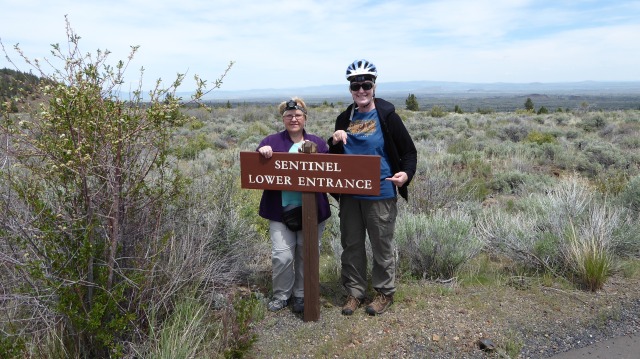 Beth and Serene in headlamps and helmet ready to explore the Sentinel Cave.

We explored two easy and three moderate  caves. We declined the chance to crawl around and squeeze through low openings! Maybe another day….not!

It looked like one of the easy caves to begin with – a nice path and an open entrance.  Soon we were going down, down, down a series of steps to an ice cave.   And then up, up, up on the way back out.    The change in temperatures from the outside to the inside was always stark and refreshing.

Randy holding up a land bridge as we exit one of the caves!