The campground we stayed in near Butte was one of my favorite campgrounds anywhere. The sites were spacious, the scenery was beautiful, and Elko and I enjoyed the cows.

Sometimes the cows seemed concerned about Elko and as though they were trying to determine how one of the calves got out. Other times Elko would decide they were too close to our trailer and move them off. He showed us years ago that he could herd cows, a skill he learned in his life before us.

The other reason this campground was ideal was for its location.  We saw so much during our week in the area that I’ve already written two blogposts about places we visited, and now I write a third. This time our trip went north to Deer Lodge to visit the Grant-Kohrs Ranch and the Old Prison Museum Complex.

Grant-Kohrs is a national historic site and a working ranch. It was deeded to the National Park Service by Kohrs family decedents as a way to preserve history and the ranch.  It opened to the public in 1977.

When built, Jimmy Grant’s house was the nicest of its kind in Montana.

The first owner, Jimmy Grant, became one of the original Montana cattle barons. After the Civil War, cattle were scarce in the east and the western cattle industry filled the need. Cattle barons developed herds, mostly grazing on open range, and drove them to towns where trains moved the cattle east for slaughter.

We were able to tour the house with a ranger, but they did not allow pictures inside.

The original ranch house was expanded after Conrad Kohrs married Augusta.  They, along with Conrad’s brother, ran the ranch and other business interests for many years.  Grandson Conrad Warren began managing the ranch in 1932.   His wife, Nell, was responsible for recognizing the historic value of the ranch and was instrumental in saving the documents and items which reveal so much today.

As a historic ranch, period methods are still used, including blacksmithing needed repairs.

They also grow hay for the cattle herd which is maintained at about 100 head.    Near fields use horses and plows while outer fields use modern techniques.   The Beaverslide method of stacking hay began in southwestern Montana and makes “bread loaf” hay stacks.  Hay is pulled off one end of the loaf when needed.

Resident cattle and horses are joined by national forest service horses during the winter months.  A reduced crew cares for the ranch and all animals.

The fence behind the deer is a jack fence.

The very stable fence uses lodgepole pine and does not require sinking posts into the rocky ground. It takes eight conservation youth working hard all summer to replace one mile of jack fence.

There are many exhibits around the ranch, some to see and some to experience!

At least he tried!

Charles Goodnight is credited with creating the first chuckwagon while preparing for a cattle drive. He, like other cooks,  was the most important person on the cattle drive and made $40 per month.

We enjoyed a chat and a warm cup of coffee with this chuckwagon cook.  She is a seasonal ranger from Los Angeles and, hopefully, makes more than $40 per month.

We enjoyed our visit to the the Grant-Kohrs Ranch and then we moved down the road a few miles to the Old Montana Prison and Auto Museum.

The Old Montana Prison opened in 1871. Plagued with inadequate funding, first from the territory and then the state, the warden received approval to use convict labor to build additional cell buildings and walls.

The prison walls are 24 feet high and buried four feet deep to prevent escape by tunneling.

Cells were designed for one, but almost always held two prisoners.

Overcrowding was a constant problem throughout the use of the prison.   Frank Conley  became warden in 1890 and worked for 30 years to provide jobs and opportunities within the prison to rehabilitate prisoners and keep them productive.    Other wardens took a different approach but still had to deal with underfunding and overcrowding.

Both factors contributed to a riot in 1959 that made the national news.  Ringleader Jerry Myles and two accomplices seized rifles in both cell houses. They held 26 prison employees and other inmates hostage for 36 hours.  Deputy Warden Ted Rothe was killed. 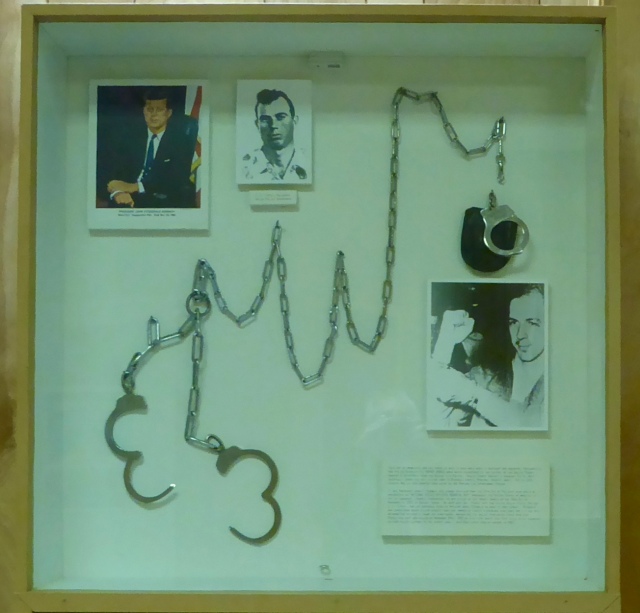 These handcuffs held Lee Harvey Oswald after he was arrested for killing President Kennedy. They are on display at the prison.

The last prisoners were moved to an updated facility in 1979.

There are five museums in the prison museum complex. We only had time to take a quick look at one more, The Car Museum. There are 160 nice cars here!   Sixty percent are owned and on loan by the proprietor of the local saw mill.

We spent a week near Butte, and didn’t see it all.    There is always so much to do and see and write about!