Shade in a Box 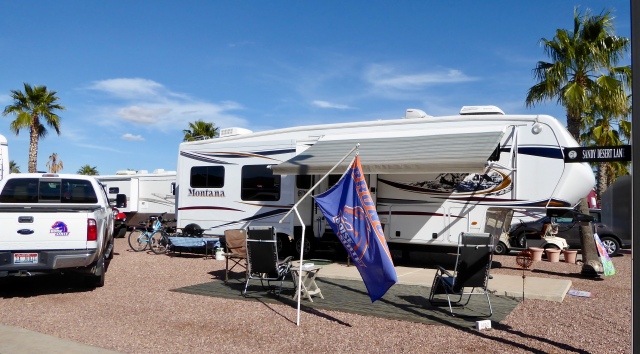 We found the sun in Casa Grande, Arizona! Our site has no natural shade in the afternoon so we put up our 10 x 10 picnic canopy. A resort ranger came by a couple days later and said it was not allowed so we ordered shade in a box, a screen that attaches to our awning, from Amazon Prime. 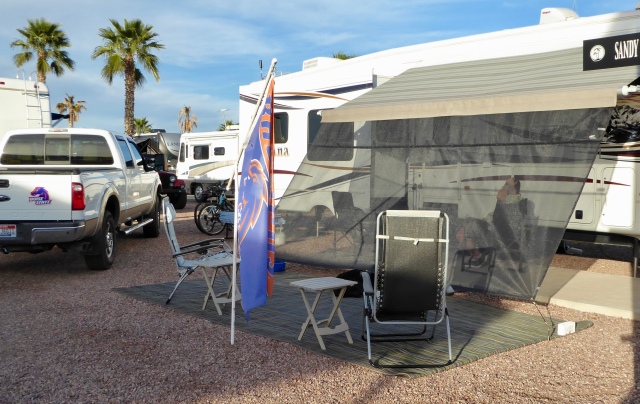 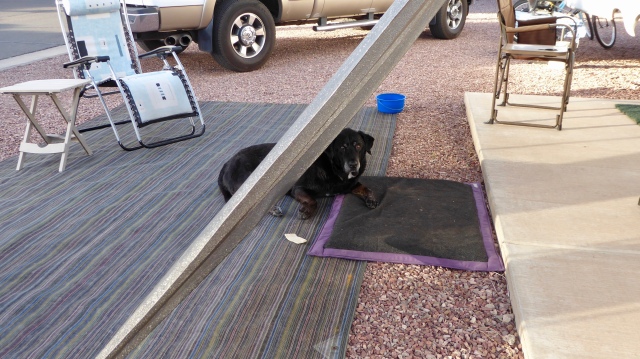 Our friends Mark and Teri, met at Farragut but last seen in Montana, came through Casa Grande on their way north and we enjoyed spending two fun days with them.

We are at the nicest RV Resort we have ever been to. We had heard from other RVers that Palm Creek was a “10” and they were right. About 3800 people call Palm Creek home in the winter and only 350 call it home year round.

The grounds are well cared for with a huge array of “active lifestyle” amenities. We have walked for miles and miles around and through the park (about 2.5 miles around), line danced, hot-tubbed, and been to a few shows.  We have barely scratched the surface.

We’ve seen a few musical acts including The Arizona Trio. All have been good!

This was the parking lot after the show

There was a Night Glow Balloon Festival as part of the park’s Cancer Awareness Weekend.

Another night we went to find scorpions. We only saw one, it was about one inch long.

Elko has had a great time playing in the dog parks. Most even have grass – a rare commodity in Arizona. 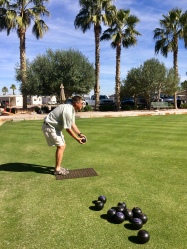 Our new experience has been learning to lawn bowl!  It has similarities to Bocci Ball but the bowls (balls) have a built in bias so you calculate the left or right roll in addition to the distance.  And calculating correctly doesn’t mean you throw it well!  We have had fun with it but have no idea when we’ll ever play again once we leave here!

There is a lovely 18 hole golf course that Randy hasn’t even played yet! He plans to and is signed up for a Glow Ball Night Tournament later in the month.

Randy has had a multi-day project trying to diagnose and find a solution for our poor Verizon cell and data service.   He purchased a cell booster and  three antennae for various circumstances.  It took the directional antenna, pointed directly at the cell tower, to show much improvement.  Mostly there are just too many people here at this time of year for the cell towers to be able to accommodate everyone. People who live here, or come for the whole season, get a cable-modem installed.

We understand why people choose to live here.  Palm Creek is a very nice, and very pricey, park – and probably worth it given all the amenities. We came in on a first timer’s half price rate and it was still $650 for the month.

There is so much to do here that we’ve barely left the park.   Randy and Mark played the local disc golf course and yesterday Randy, Elko and I went back and played it again.

Hopefully we’ll get out of the park a bit more in the next two weeks!

4 Responses to Shade in a Box