Nice and NOT in Nevada

We traveled north through Nevada intending to visit two intriguing state parks: Valley of Fire and Cathedral Gorge. The pictures and reviews for both parks were great but, unlike most states, Nevada doesn’t take campground reservations. Everything is first come-first served and our plan was to try to make it work not once, but twice! Because of our RV size, and my discomfort with winging it, we almost always have reservations.

With no guarantee, we left at 7:30, two or three hours earlier than usual. It was mid-week and our destination was an hour east of Las Vegas. We arrived at Valley of Fire well before noon and the campground was “filling up fast.”  We had to pay the $10 entry fee to drive several miles in to see if staying was possible.

The views from the main road were beautiful and we saw RVs headed out of the park so we were hopeful.  When we arrived at the campground there were just a few open spots and the only ones we could fit into were handicapped sites. The camp hosts explained the rangers would release those sites to anyone once everything else was full but the rangers wouldn’t say when they were likely to do so.

Basically we drove 50 miles out of our way, paid $10 to drive to the campground to find out we couldn’t stay, and then couldn’t explore the park because we had the trailer attached. We are not fans of Nevada’s no reservation policy!

We decided to drive several more hours to our second park, Cathedral Gorge State Park. I spoke to a ranger from there earlier in the week who told me they are rarely full this time of year so we felt good about our prospects.

All through southern Nevada we saw solar panel arrays.

After a LONG day in the truck we found a site and I took Elko for a walk.   Randy set up, opened the slides, and discovered more disarray and damage than we’ve ever had in a prior move. He remembers a big rise and dip over a railroad track so maybe that did it. We had cupboards opened that never open, clothing off the racks in the closets and a box valance came loose. One of our rocking chairs rotated and tipped so when the slide opened, it broke one of the rocker bases.

A brief history on the rocking chairs….My parents bought two of them while living in Panama in the late 1970s for $10 – $15 each. The leather was cured with urine so in hot weather they were a bit aromatic!   My parents had them for 20 years or so and then we acquired them. We had them in our house and they “made the cut” for the trailer. We could have sold them over and over again.

Of all the things that could have been damaged, the rocking chair was not a great option! I strap them down with velcro and put rugs and blankets around them each time we move. The velcro was still holding but most of the chair was elsewhere. We are headed towards our friend Darrell who is a master wood worker. I am hopeful that Darrell can help Randy figure out a fix or rebuild.

After we regained focus, we found Cathedral Gorge State Park to be a barren and dusty place with the most interesting rock formations!  An early mining camp resident named the area Cathedral Gorge because the formations reminded her of European Cathedrals.

The campground is in the top right corner.

The park has broad expanses of eroded siltstone and we have enjoyed hiking and exploring. 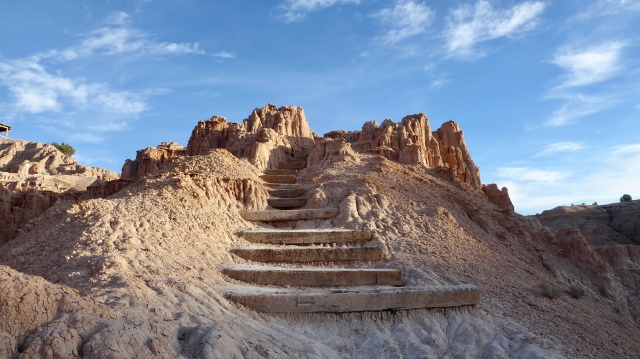 Most fun were the nooks and crannies that hide openings into slot canyons. Some go just a few feet and some go a hundred feet or more. It was much cooler inside! 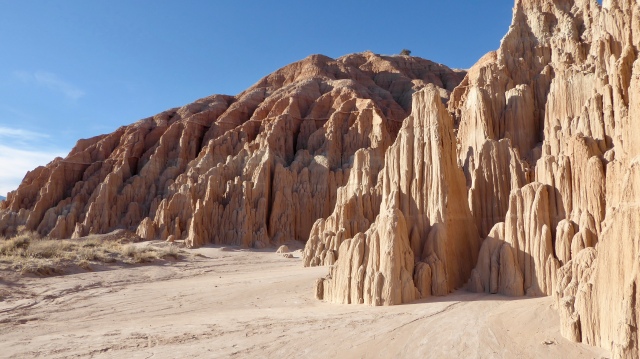 Where did my dad go?

Elko didn’t like the slot canyons we explored in Utah, but the walking surfaces in these were mostly level and he did well. Some surfaces in and around the formations were like smooth concrete.

The Civilian Conservation Corps (CCC) worked at the site in the 1930s and some improvements are still around.

So, Nevada parks were a mixed bag.  We are less likely to visit more parks in the future because of the no reservation policy.   Someday we’ll take a day trip to Valley of Fire from Las Vegas but we won’t try to stay there again.

Continuing north, we saw snow along the sides of the road and in the mountains.   We spent last night in Wells but it was mostly just an overnight pull-through and laundry stop.  After a week without sewer hookups (thus unable to do laundry in the trailer) we had quite the pile.  I did four loads in the trailer and four in the park facilities.   We have clean clothes, towels, bedding and rugs heading into Idaho!

7 Responses to Nice and NOT in Nevada