Mesquite BC (Before Christmas) 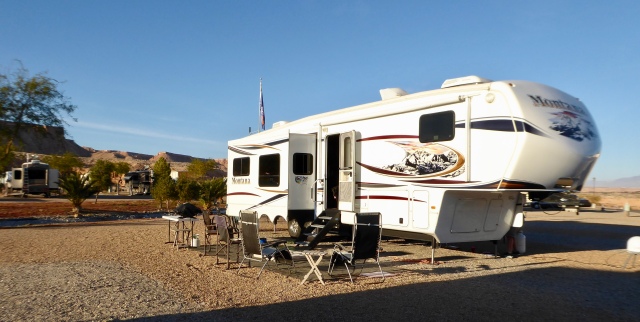 We made it as far south as Mesquite, Nevada and will be here a month. The RV park has gone through several owners (and at least two bankruptcies) so it is far from finished. In the meantime they are using every other space so the sites are huge. It is actually quite nice and very quiet. 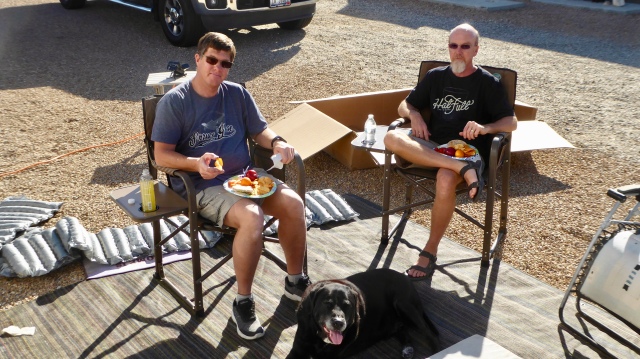 Our friend Mike drove up from Bullhead City, Arizona to spend a couple of days hanging out. Mike and Randy played golf at Coyote Springs, one of the many courses in the area. They also worked on installing Randy’s new steps. 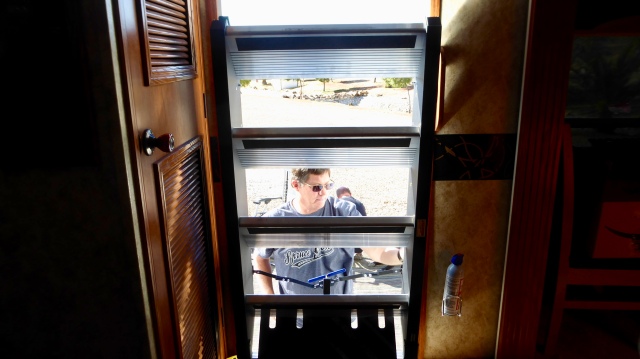 The steps fold up into the door opening while traveling.   This view is from the inside. 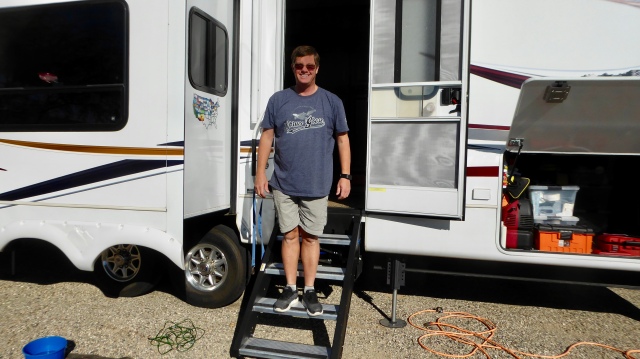 The steps are very stable and Randy is happy with them.   Elko and I are withholding judgement. 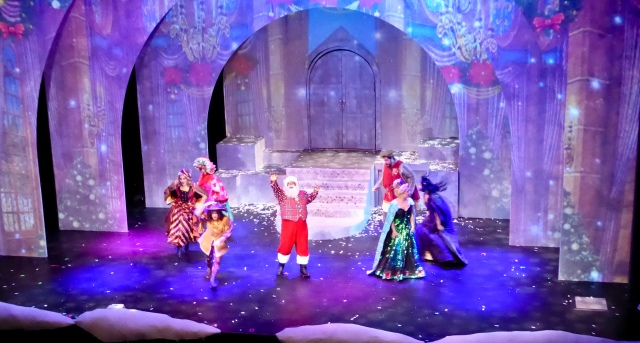 One evening Randy and I drove to the Tuacahn Center for the Arts, near St. George. We saw the best show called Fairy Tale Christmas! All the fairy tale villains, like Cinderella’s evil step-mother, band together to take down Santa. Of course, they fail and all live happily ever after but the show was very, very well done!  Bravo! 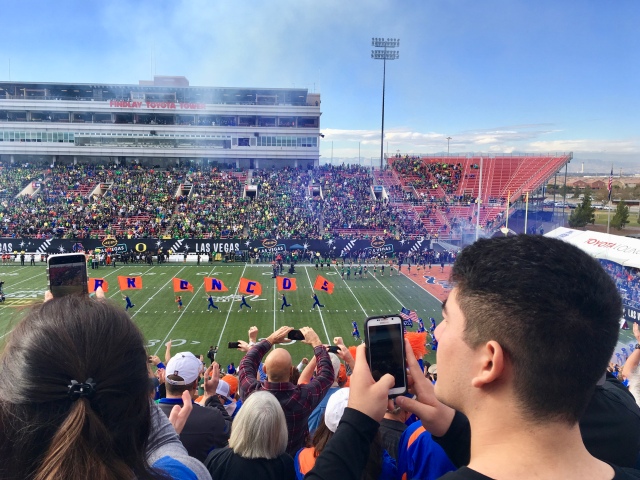 Another day we drove in the opposite direction for the Las Vegas Bowl featuring our Boise State Broncos against the Oregon Ducks. We had been at their two previous games (2008, 2009) so, since we were in the vicinity, of course we were going! 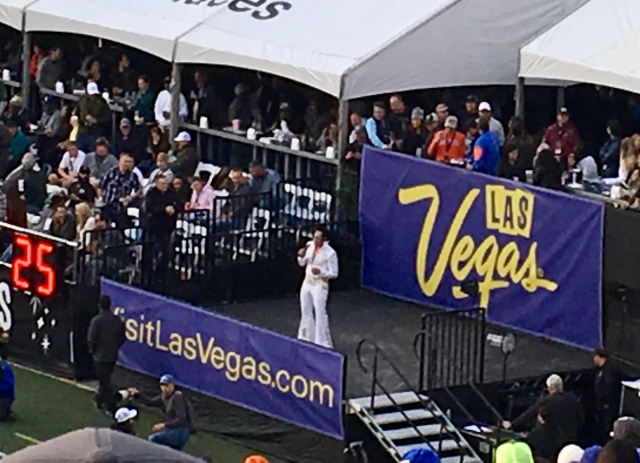 Because it is Vegas, there was Vegas entertainment during timeouts. We were fortunate to be near the stage! 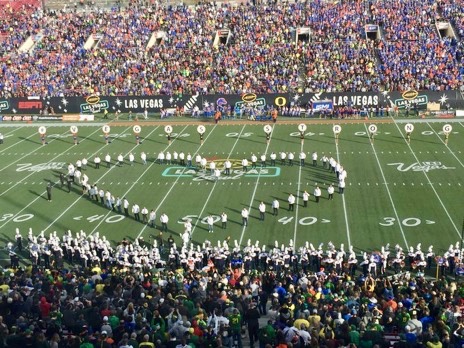 There was a very moving tribute at half time to the victims and first responders of the Las Vegas shooting. #Vegas Strong 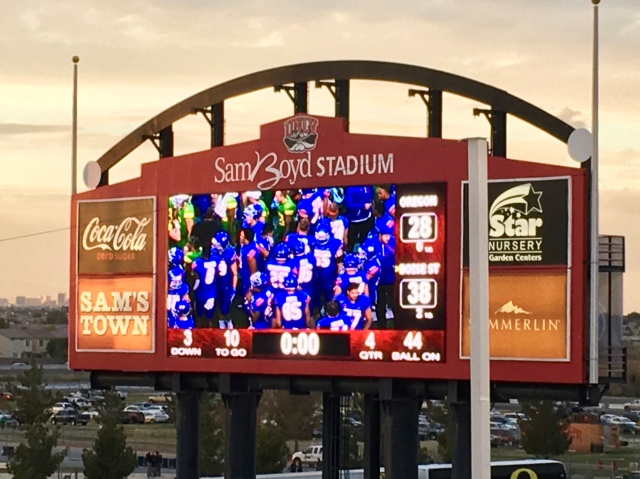 Boise State won in a game that wasn’t as close as the score! 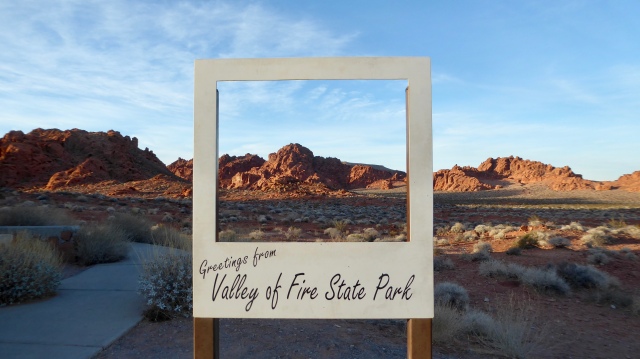 We took a day trip to Nevada’s first State Park, Valley of Fire.  Last spring we tried to visit Valley of Fire but there was no opening in the non-reservable campground. That blog post was Nice and NOT in Nevada. We didn’t try to camp this time, but it would have worked if we had. December must be the perfect time to camp at Valley of Fire as there were plenty of open sites.   We’ll keep that in mind.   Instead we enjoyed hikes, scenic drives, and some special stops along the way. 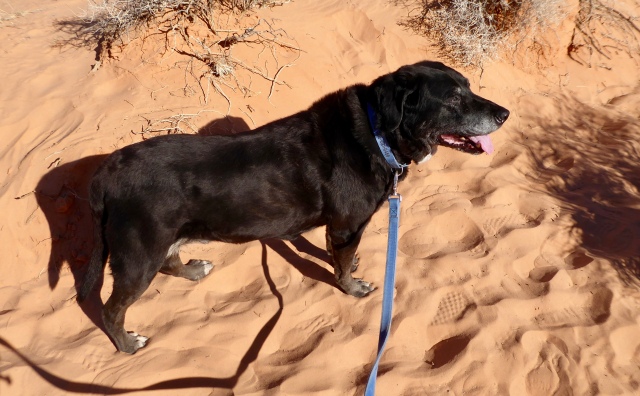 Our first hike was Fire Wave.  After the rocks in our campground, Elko was loving the soft sand! 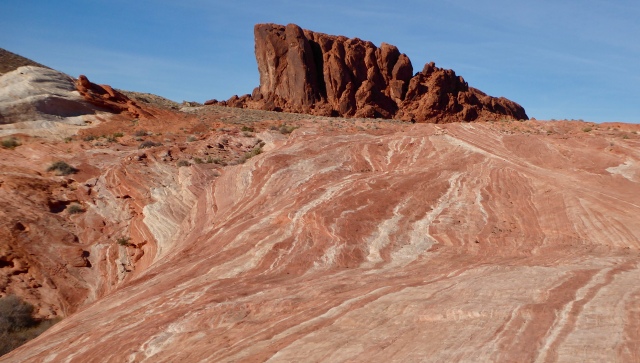 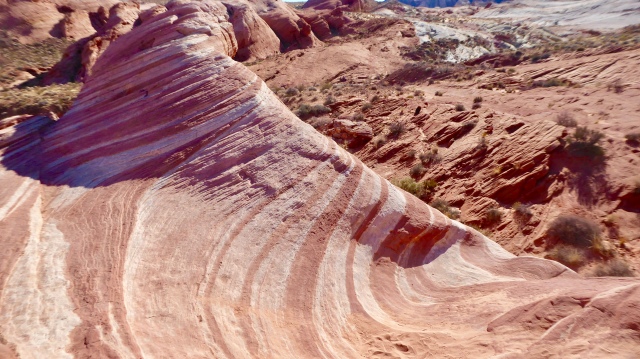 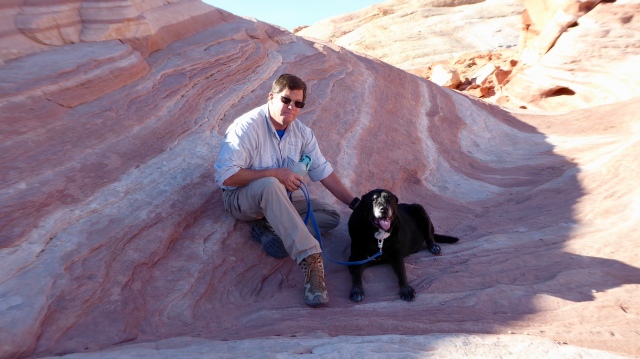 Our second hike was to White Domes.  Elko stayed in the truck and Randy and I took turns. 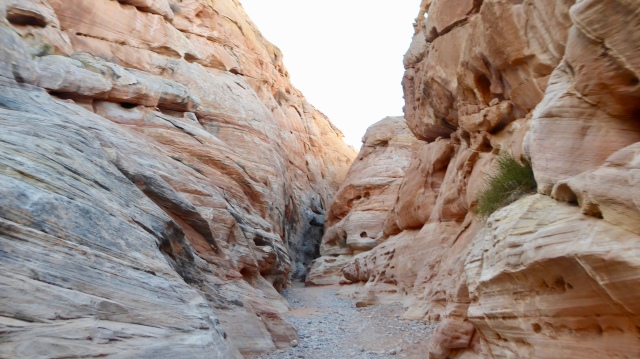 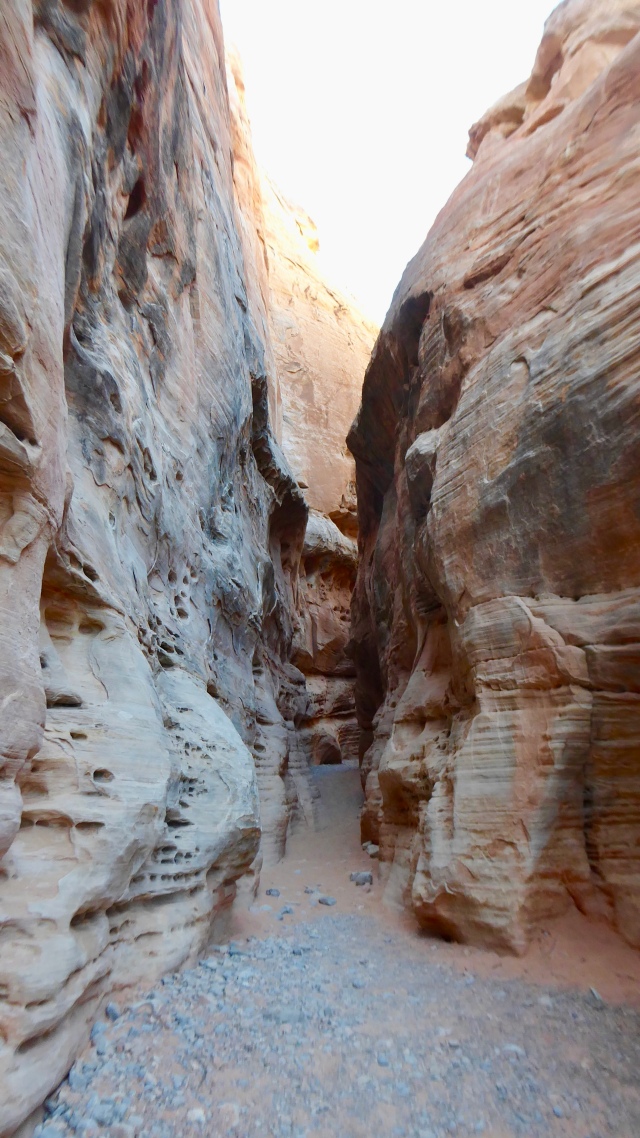 It had a nice slot canyon. 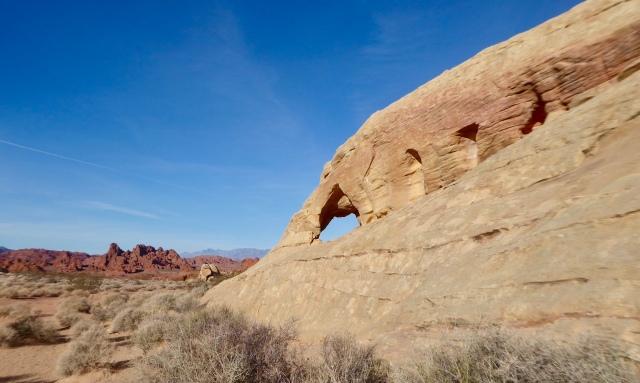 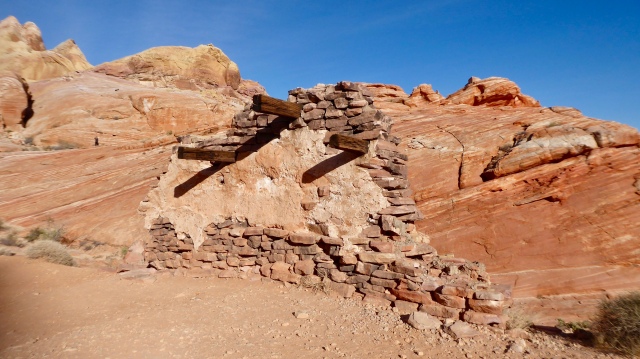 There were remains from the hacienda for the set for the 1965 movie “The Professionals.” 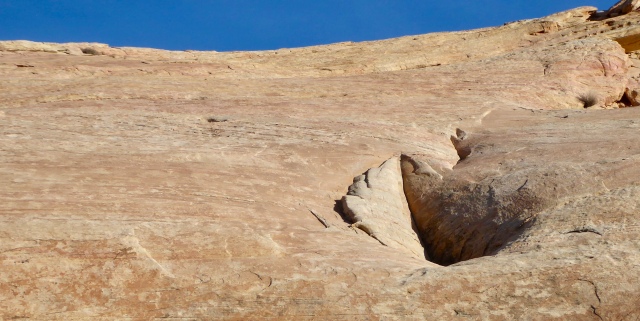 A formation I can’t begin to describe!

In other areas of the park we found other interesting sites including a beehive formation. 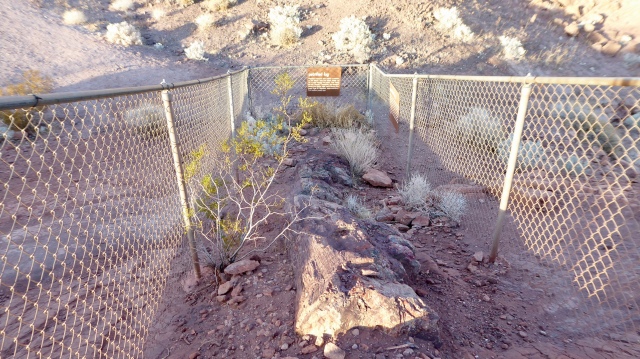 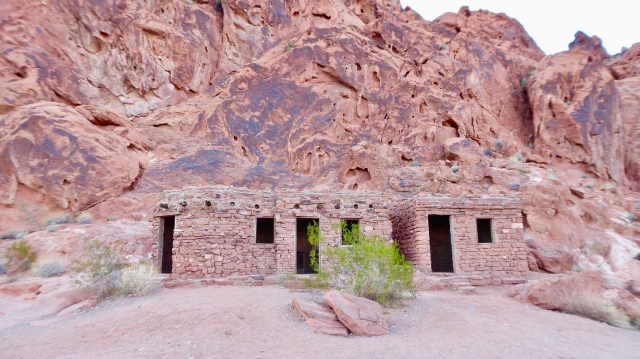 Three cabins built by the CCC in the 1930s and rented by park visitors for many years.

Each cabin had its own fireplace. 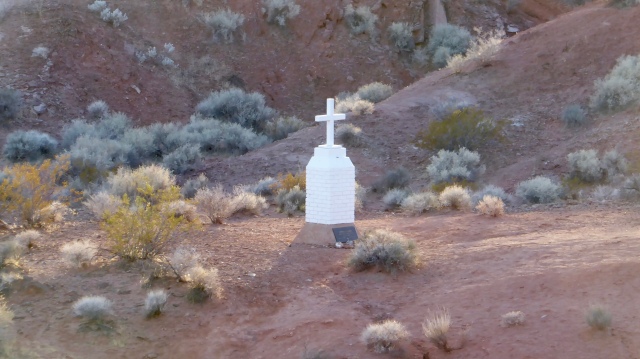 We saw a lone gravesite for Civil War Veteran Sgt. John J. Clark who died of thirst in 1915.

Valley of Fire State Park was very cool and we might come through again someday – in December if we want to camp! 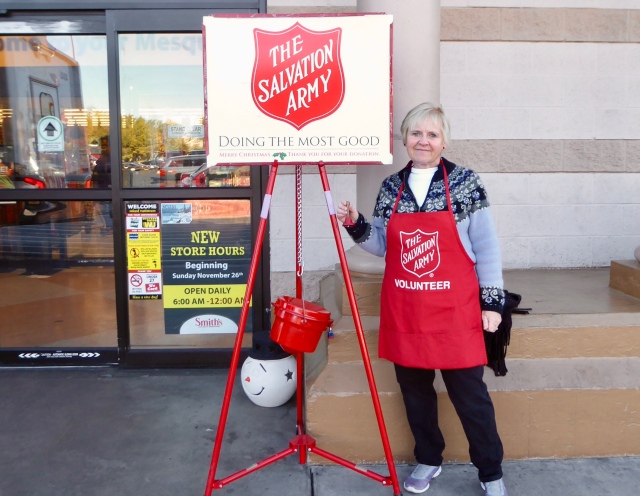 Back in Mesquite, I noticed an article in the local paper saying the Salvation Army was short on bell-ringers.   I rang the bell for a couple of hours one afternoon will do so again on Saturday.

We send our holiday and Christmas greetings to each of you from Mesquite BC.

6 Responses to Mesquite BC (Before Christmas)