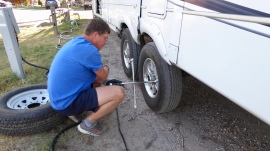 We were glad to get moving again after our truck problem but the last day in Wyoming was still stressful. Randy was concerned enough about our tires on the trailer to change one out for the spare and rotate the others.  Irregular and accelerated tire wear is the whole reason for our planned suspension change in Elkhart – we just have to get there!

We were so glad to see that when we crossed the border into Nebraska we were headed for the good life! We’re not asking for a whole good life in Nebraska, just a few days with interesting things to do, no tire drama, no scary storms and safe passage into Iowa.

Like the 250,000 people who traveled through the area during western migration, we marveled at Chimney Rock.  Natives in the area named the rock “Elk Penis” but Anglo-Americans preferred “Chimney Rock.” Emigrants on the California, Mormon and Oregon trails came by here to travel the south pass through the Rocky Mountains.  Chimney Rock was a prominent landmark and often featured in drawings and diaries.

Chimney Rock is not actually rock but is Brule Clay.  It stands 360 feet tall.

We were surprised to step outside in the evening and see Chimney Rock illuminated! 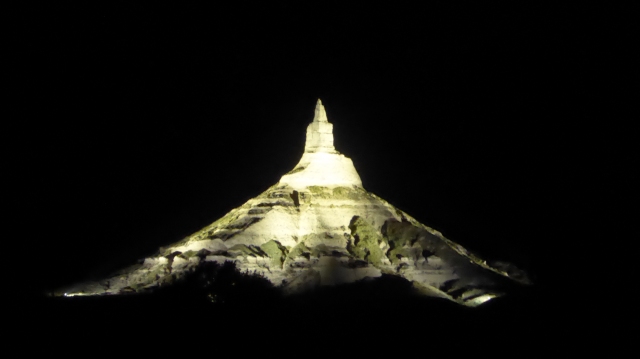 Carhenge is another landmark of interest in the area, but it is man-made!

Jim Reinder spent years working in England and wanted to built a version of Stonehenge for his hometown of Alliance, Nebraska. Twenty five cars were collected and Carhenge rose in six days at a Reinder family reunion in 1987.

This Jeep was driven 1000 miles by its owner to be part of Carhenge.

The very clever introduction video said the lawyer in the family finally caught his ambulance and donated it to Carhenge.

The good citizens of Alliance were not enthralled with Carhenge at first but have embraced the site over time. The Friends of Carhenge have built additional auto art. 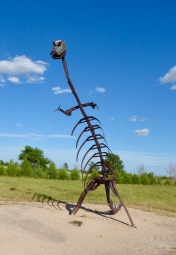 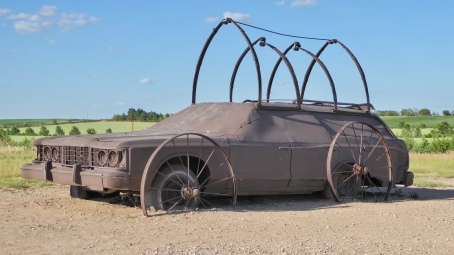 Over time, four of the original 25 cars, those of Japanese origin, were removed and replaced with American cars. The Japanese cars were allowed to “rust in peace.”  Carhenge was named Trip Advisor’s Top Family Attraction for Nebraska in 2016. 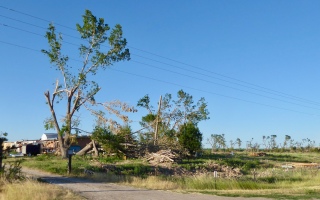 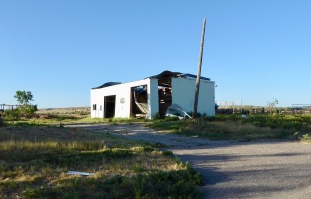 While enroute to Carhenge we saw storm damage northeast of Bayard.   A tornado swept through the area on June 12, 2017.   We are thankful there were no deaths or serious injuries and hope that all of the people effected by the tornado will soon be living the good life in Nebraska once again. A very impressive StormChasing.com video of the tornado and damage is available here. 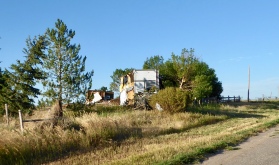 2 Responses to Nebraska: The Good Life