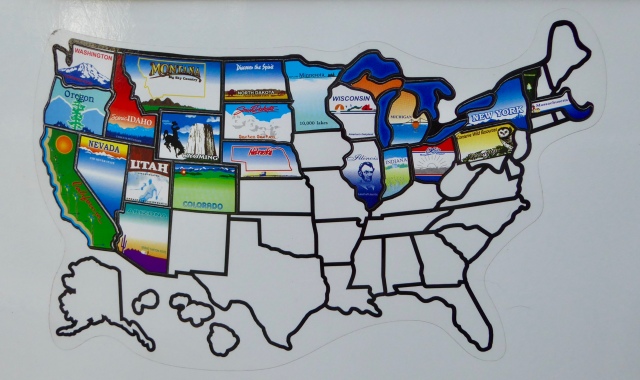 Our map has had an empty spot where Iowa should be for almost a year. When we met Rick and Diana in Arizona, they invited us to come visit them in Iowa and earn our sticker. So we did! 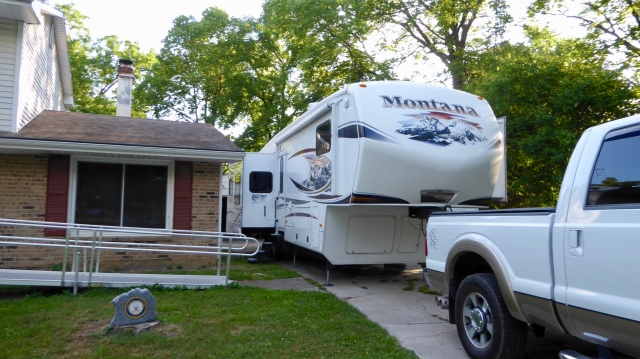 We went to dinner with Rick and Diana (center) and their friends Richard and CarolAnn and had a nice visit. After spending the night, our personal criteria for “earning” a sticker, we put it on!

We actually “earned” our Iowa sticker in other ways too. As soon as we crossed the Nebraska-Iowa border the condition of I-80 worsened dramatically. The road was bumpy and paved such that it was very noisy.  The road and tires screamed at us for 125 miles.  Lots of states get reputations for bad roads – Iowa will be one for us!

This was a great campground – lots of grass and surrounded by cornfields!

We also found “hot and humid” in Iowa! Even the locals were saying it was worse than normal.  Of course, summer in the midwest means thunderstorms and tornado warnings.  We had those too.  Yes, we earned that sticker in several ways!

But we also enjoyed Iowa!

We were able to spend a morning with our friend Elaine. We have been close friends with her daughter’s family in Boise for many years and over time we got to know Elaine as well. It was a joy to stop in and have a nice breakfast and visit.

From the same family in Boise, we also saw Christina and met her husband Andrew and their Petey. Who knew we could have so much fun seeing people in Iowa that we know from other places!

We enjoyed visiting the Amana Colonies, a national historical landmark. There are actually seven Amana villages that comprise a once communal religious community.

The predecessors of the Amanans broke from the Lutheran Church during the Piety movement in the 1700s. They became known as the Community of True Inspiration and gathered in Germany. In 1842 they came to America and and settled in New York. In 1855 they moved to Iowa, seeking more land to support approximately 1200 members. 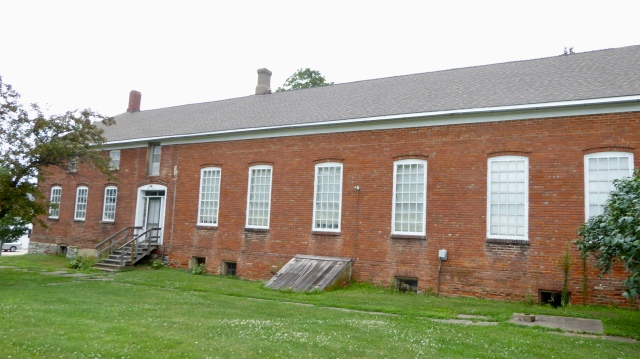 One of the Amana colony churches.

The church members purchased land and developed seven communal villages surrounding many thousands of acres of land.  Life revolved around the church at the center of each community with 11 services weekly.

Women on one side, men on the other.  The elders face the congregation from their own simple bench.  The church still follows these traditions today.

Each member had work or school and their efforts supported the community which in turn provided for all their needs including  food, shelter, and medical care.

Meals were prepared in communal kitchens, each feeding 35-40 people, three meals and two breaks per day. 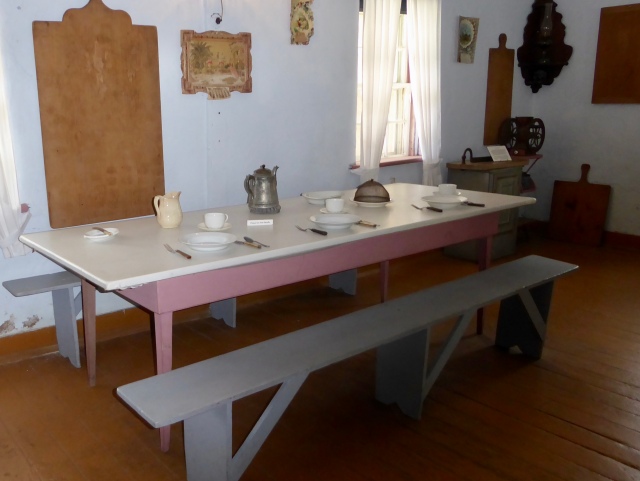 Men sat at one table, the women at another.

Kitchens were supplied from the village bakery, smokehouse, meat shop, gardens and orchards.

For people who were ill, or families who wanted to eat together, food could be taken from the kitchen and warmed up again at home with these portable burners.

Members received credit at the general store for their personal choice items.

In 1932 the Amana Colonies went through the “Great Change.” The members abandoned communal living and switched to a structure where some assets were owned by individuals, some by the church and the rest by the Amana Society. All members were stockholders in the Amana society.

That arrangement still exists today. The Amana Woolen Mill, Furniture Shop, General Stores and Meathouses are owned by the society and employ members for salary. The same is true of the farmlands.

Amana Appliances was established after the great change, provided good employment, and is now owned by Whirlpool. 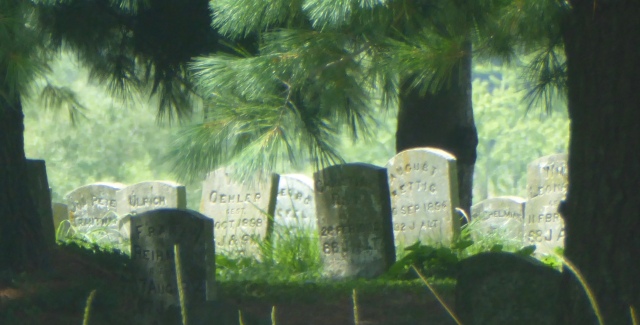 We learned that residents are buried in chronological order with the same simple headstones and pine caskets (made in the Amana Furniture Store).   There are no family plots. You are buried between the persons who died before and after you.

There are 400 historic buildings remaining in the seven villages utilized for businesses and homes.  Many are owned by residents who can trace their families back to the founding generation but it is not a closed society. Anyone can live and work in the Amana Colonies but the Amana society has right of first refusal on the sale of historic buildings or stock shares, a right rarely exercised.

Currently, tourism is a significant industry for the Amana Colonies and everything is well appointed for lodging, shopping and entertainment.    We enjoyed ourselves very much.

During our stay we ate at both German restaurants and a brewhaus. We enjoyed the German food (especially the potato dumplings) but what we liked best was pure Iowa – deep fried sweet corn nuggets! 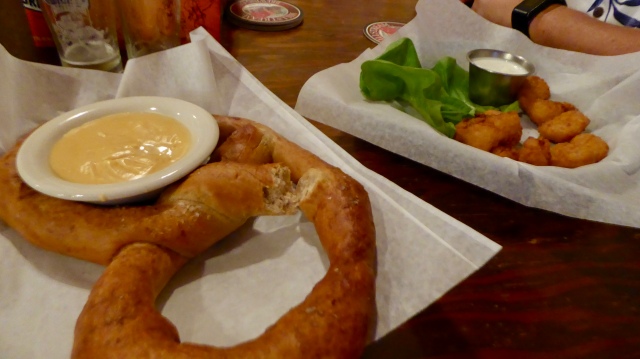 German beer pretzel and deep fried sweet corn nuggets.  We liked the corn nuggets so much that we went back a second time.