Several questions came up during our wanderings in southern Arizona, like what is The Thing?   I noticed my first “The Thing?” billboard between Phoenix and Tucson about 40 years ago.   The more you travel around southern Arizona, the more billboards you see. (It is similar to the Wall Drug billboards across the northern US for those who have seen those.)

The answer to the question was never important enough to actually drive there, but since we were in the vicinity – it was finally time!

Suffice it to say that The Thing is not the archeologic wonder they hint at it being but the whole experience was mildly entertaining for a tourist trap. (I’m not going to spoil the fun!)  We enjoyed our Blizzards at the attached Daily Queen a bit more but it was wasn’t a wasted half hour.

Another question:  Why are there miles of train engines sitting out in the desert? 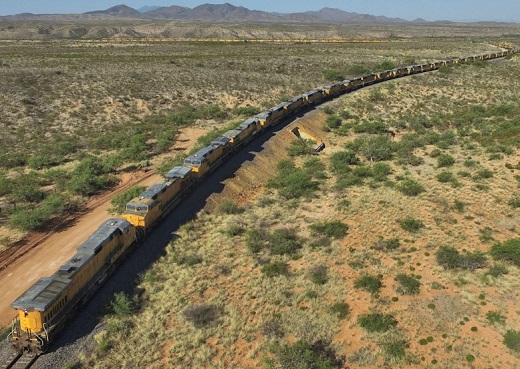 A Google search revealed that (as of 2016) there were 292 engines stored in the desert due to a weak coal market. Natural gas is cheaper and cleaner and there just isn’t the need to transport as much coal anymore.

Next question:  After we walk 1.2 miles to the lake, will there be sandhill cranes? The area around Willcox is the winter home for sandhill cranes from all over North America. We could hear them from our RV park in Willcox. 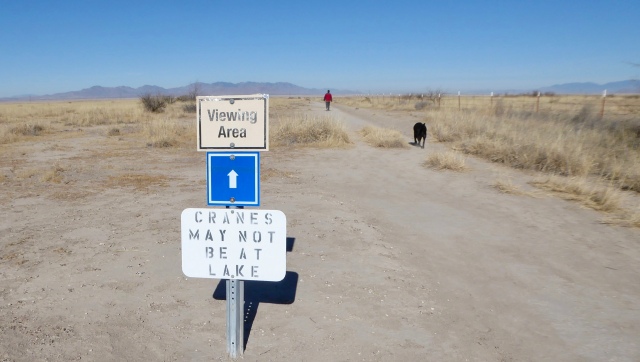 We went looking one morning, but there was no guarantee….

When we got to the viewing area, there were no sandhill cranes at the lake….Fortunately, after we walked the 1.2 miles back out, we met some people preparing to walk in. We were able to tell them the cranes weren’t there and they told us where they’d just seen some.

We saw about 40 cranes (instead of hundreds or thousands) but we were only about 100 yards from them, much closer than we’d have been from the viewing area!

The unanswerable question:   What happened to our calculator? Obviously this question has nothing to do with southern Arizona except that is where it died. 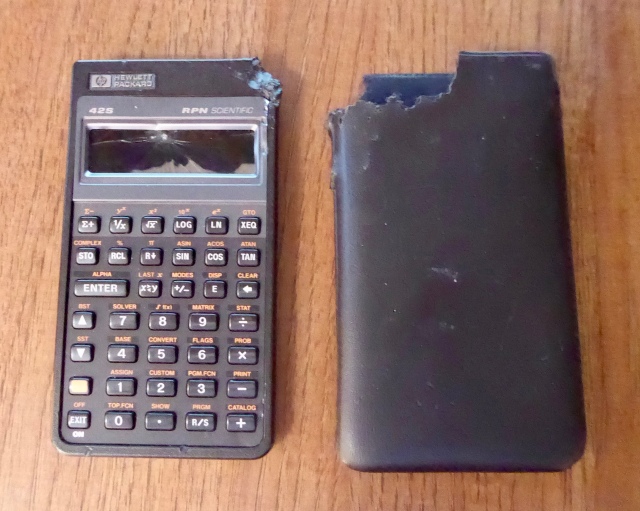 Randy brought this calculator home from Hewlett Packard to do evening work sometime in 1981 or 1982.   Our dog, Anna, chewed the corner of the calculator and cover so it couldn’t go back to HP. It became our home calculator for the next 36 or 37 years. Once I got used to HPs “reverse polish” way of doing calculations,  I never wanted to use a regular calculator again.   It was chewed up and battered but it worked.

The calculator survived the dog,  decades of me using 1/100 of its capability, and almost 4 years of temperature extremes in the trailer.   After a recent move, we found the calculator still in its regular storage place but dead with a cracked screen. So, the mystery is what happened to the calculator.   Unfortunately, that is a question we will never be able to answer.

The TBD question:  Do we have a major slide problem?  As we left Kartchner Caverns State Park and arrived in Willcox, our largest slide binded and bucked as it was going in and out.  Slide repairs usually require hoists and lifts and forklifts and all kinds of things Handy Randy doesn’t have in his bag of tricks.

He looked anyway and found some loose bolts and some sticking tape, nothing that seemed to warrant the problems we’d seen.   I found there was no one in Willcox able to work on something as major as a slide so searching out help in Mesa was our best bet.

After a pleasant few days in Willcox, the slide seemed to move fine but Randy still wanted to have it looked at in Mesa.  We found a company, RV Renovators,  willing to let us do a drive by on our way into town so they could see what was wrong.  That way they’d know what parts to order for the repair.  When they looked at it, watching it move in and out, they couldn’t see anything wrong with the slide.  No repair needed – and no charge!  Did Handy Randy fix the slide just by removing some sticking tape and tightening some bolts?   The answer to that question is still to be determined!