We timed our trip through Las Vegas to attend the Mountain West Basketball Tournament. Both Boise State teams were high seeds and we hoped to watch quite a few of their games.

We arrived in Las Vegas in time for the BSU women’s semi-final game. They won easily and had a place in the finals.

The Bronco women won their championship game with a buzzer-beater! It was very exciting and we enjoyed the post-game festivities. 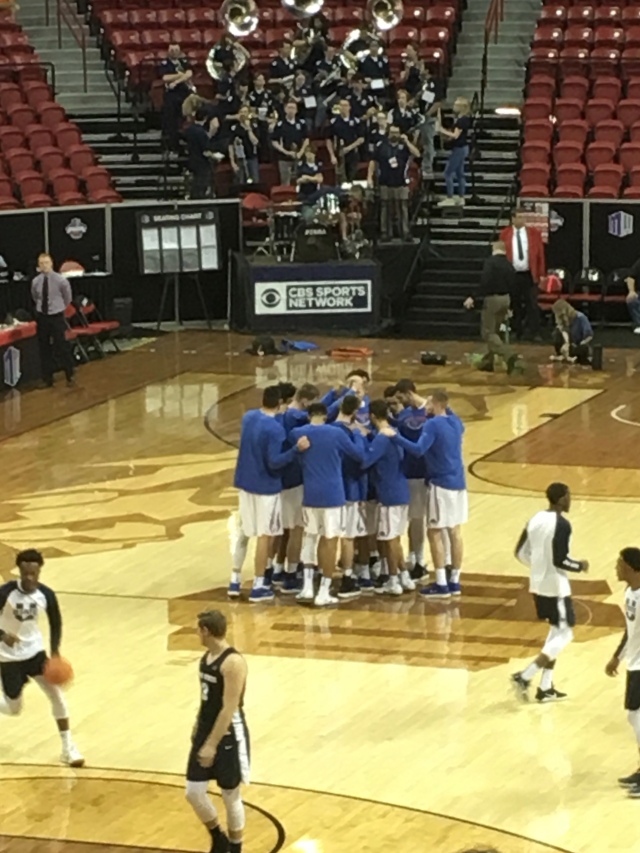 The BSU men played their quarterfinal game and suffered an upset loss. We were sad but reducing our basketball activity freed us up to do a variety of other things in Las Vegas.

We went to see Donny and Marie at the Flamingo! (No photographs allowed so this is a picture of a picture…)  It was a very good show.   Even after fifty plus years in show business, they both have strong voices and good engagement with the crowd. When Donny started singing Puppy Love, I was twelve all over again! 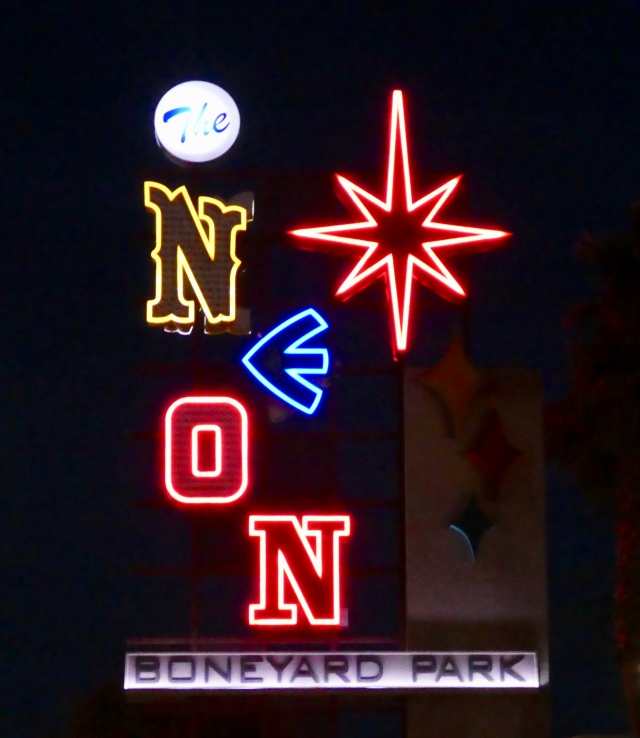 We went to The Neon Museum and Boneyard.

Parking was a little tight for this beast but Randy is good at it. 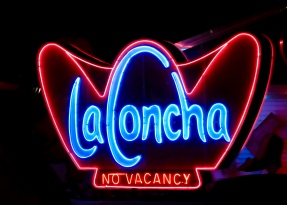 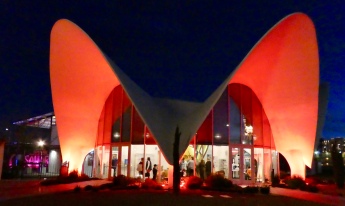 The Neon Museum occupies the old LaConcha motel lobby and grounds. It has 200 iconic neon signs in its collection. Eleven are fully restored and lighted. 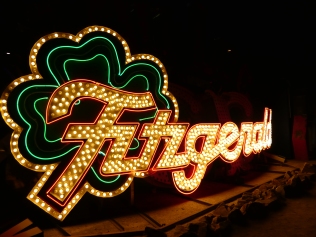 Nearly all Las Vegas signs are commissioned and the custom design company maintains ownership and does the maintenance.   When a sign is removed, they might canibalize parts from one sign to fix or build another.    The non-profit Neon Museum has eleven signs that are in working order. A few were given to them that way and some they have restored at great expense. 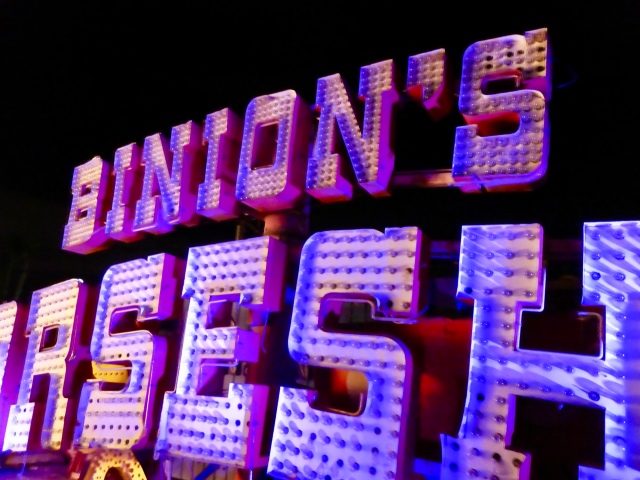 Binion’s Horseshoe was the first casino to comp common gamblers with drinks, rooms and transportation intending to lure them back.  Before Binions, just the high-rollers got that “benefit.” 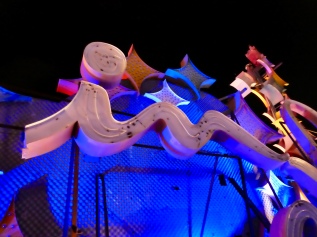 The original 1950s Moulin Rouge sign is massive.  This is just one part of it.  Moulin Rouge was the first desegregated casino.   Sammy Davis, Lena Horne, and Nat King Cole could perform and gamble with their friends, black and white. At other casinos they might be paid to entertain, but they would have to enter and depart out the side door.

We learned that the combination of red and yellow work as day time neon. Think McDonalds and In-Out Burger.

It isn’t clear in this picture but the word Yucca and the yucca plant are different shades of green.  Using different types of gas in different colors of glass tubing can create a full array of colors. Each sign is individually produced. There are no shortcuts.

Steiner Cleaners was Liberace’s choice for dry cleaning his fancy clothes. A seamstress would take a week to remove and then replace the sparkles and sequins when an item was in for cleaning.  This sign was one of the first to show movement. 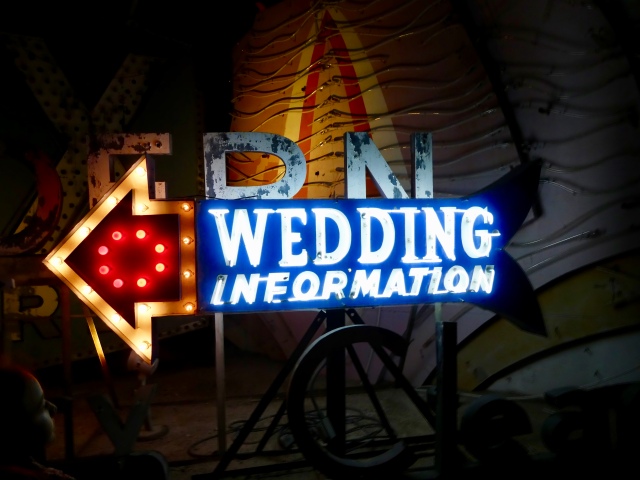 This sign was at McCarron Airport for many years. Las Vegas was, and is, a destination for easy marriage and divorce.  The city itself took hold in 1931 due to Nevada’s easy divorce laws, the end of prohibition and the construction of Hoover Dam. 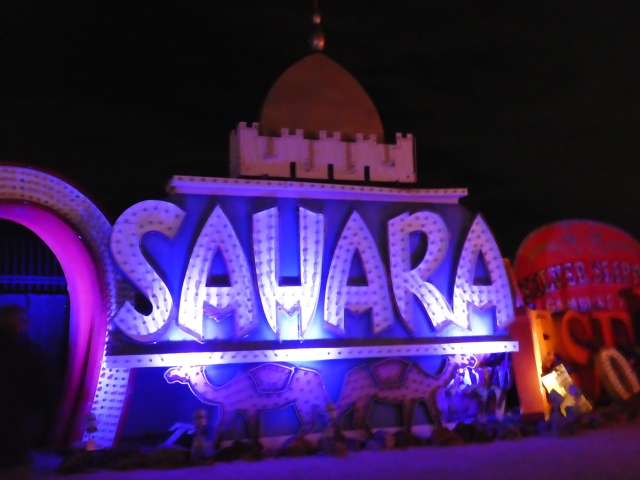 Past and current Las Vegas signage is beautiful and mesmerizing in a way.   In a city famous for glitz and glam, we never expected to find natural beauty.

Red Rock Canyon National Conservation Area is 20 miles north of Las Vegas. Geologically created by the Keystone Thrust, the landscape is quite varied. Red Rock Canyon is managed by the BLM and Nevada State Parks.  There are many hiking trails and a 13 mile scenic drive. 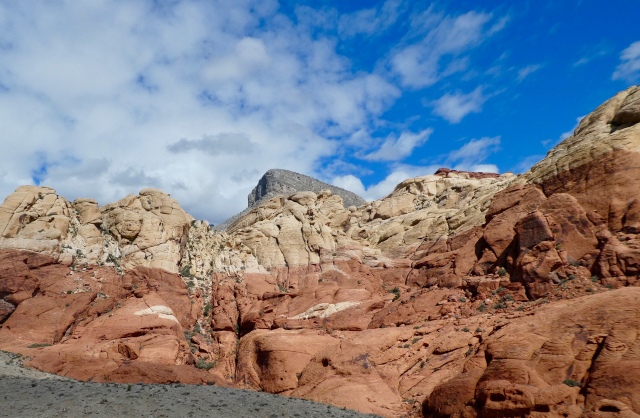 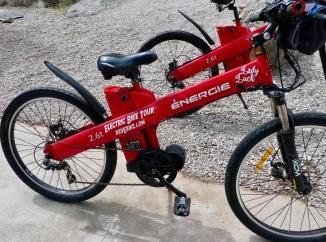 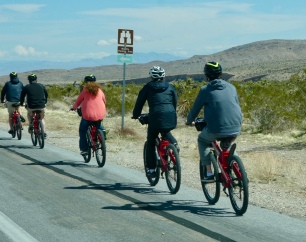 Some people were using electric bikes on the scenic drive.  That looked like fun.

Another option were these Scooter Cars.  That looked like more fun.  We had Elko so we used our truck.  That was less fun, but we were comfortable and his company was outstanding.

We went back to the glitz and glam for our last night in Las Vegas. 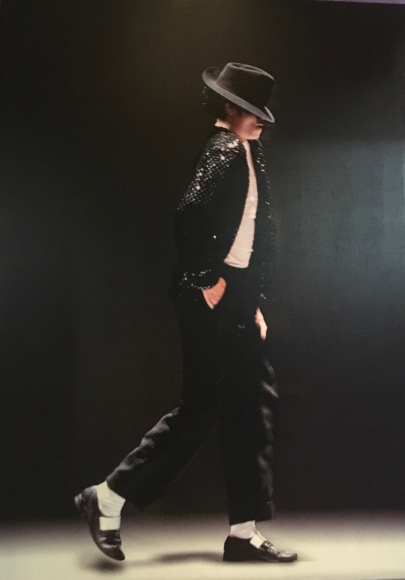 We enjoy a variety of shows in Las Vegas.  This time we saw Cirque du Soleil’s Michael Jackson One at Mandalay Bay.   As the poster says it was “a virtual parade of wow moments.”  We saw stunning acrobatics, a life size Michael Jackson hologram singing and dancing with the real person dancers, and even got snowed on inside the theater.

We are hoping that is the last snow we’ll see.   We head north tomorrow and since it is only mid- March, we likely won’t escape it totally.   We like variety – but not in the weather!

4 Responses to Variety in Vegas!