Given a one week delay before the start of Randy’s chemo, we were able to go to the Boise State – Oklahoma State football game – almost as planned.   Originally we were to fly in and out of Boise, meeting our friends Kent and Pam in Oklahoma.  Given we are now in Mesa we looked into changing our reservations to fly from Phoenix. That was crazy expensive so we canceled, rented a Cadillac and drove 1000 miles with about three hours notice.   It was great to take off and put some of the worry of our present circumstance behind us.

This Oklahoma map is backwards from the courtyard, but not from the street!

When we arrived for the game we heard “Welcome to Stillwater Ya’ll” over and over again.  We have gone to quite a few “away” games and nearly all venues have some welcoming people but nothing like Stillwater.

Like a thousand other people we started our game-day experience at Eskimo Joe’s.  Kent had heard it was the place to go – and it seemed everyone agreed.   To make it even busier – it was open seating.

Pam was diligent in watching for BSU fans who were nearly done with their table.  They turned it over to us and we shared our table with other BSU fans. 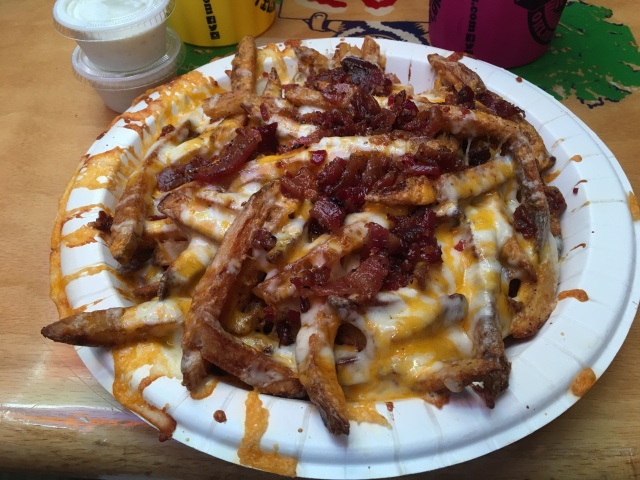 The famous meal at Eskimo Joe’s is cheesy fries.  I ordered them and decided they were very good except for the too-sweet bacon.  Randy, Kent and Pam all thought the bacon was just fine.

Ready for the game – hot, humid and blissfully overcast. 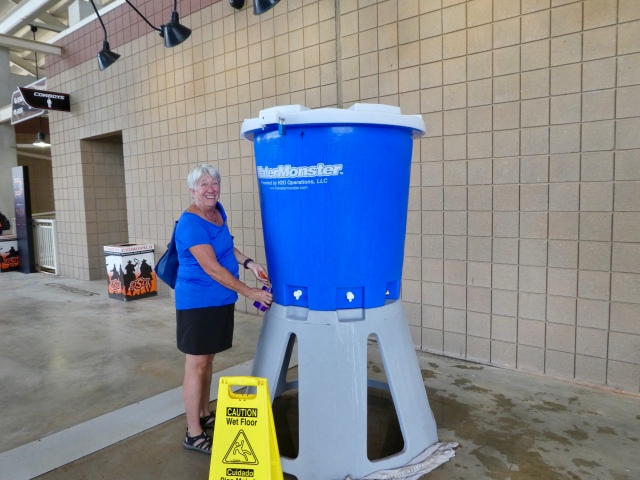 Boone Pickens Stadium had free water for awhile, until it was empty. 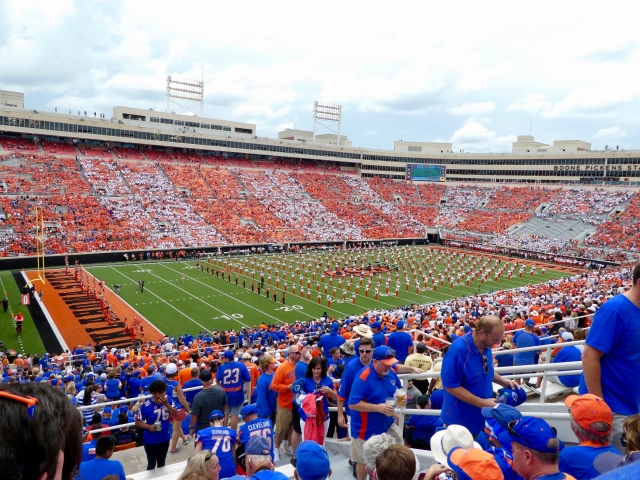 What do you do when the game doesn’t turn out the way you want?  Have ice cream for dinner!

Another day we traveled 50 miles west of Oklahoma City to El Reno, home of the famous Onion Burger.

We had already eaten but decided we’d get one onion burger to share.  It was fine, but not reason enough to come to El Reno.

The real reason we came was to visit Randy’s old home-town.  He lived in El Reno until he was nine years old.  He remembered this theater and other buildings.

We found the street he lived on as a very young boy and he recognized the house type.  I took a few pictures of possible home sites. 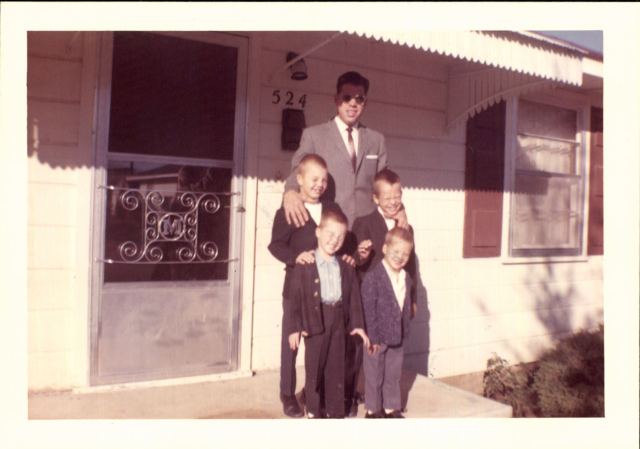 I found this old photo when we got back to the computer and saw which house we should have looked for –  number 524.  Randy is front left, the third of four brothers.   Randy had remembered the scrolled M screen door but we didn’t see one  50 plus years later. 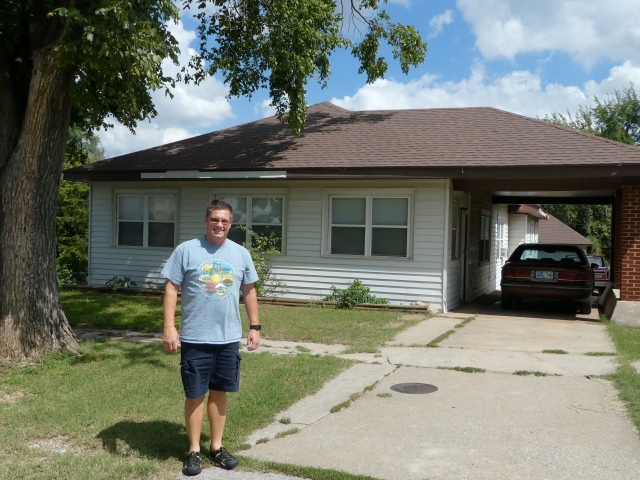 We also found his family’s second home in El Reno. 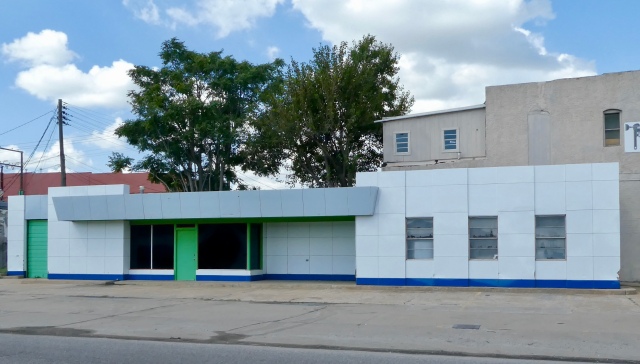 This building held his dad’s Champion Service Station in the 1960s.

We went on a Tram Tour of El Reno.

Kent, Pam and I explored the Historical Museum grounds and found the very first Red Cross Canteen in the United States, built in 1917.

Randy met a woman in the museum who knew his dad, mom, aunt and uncle. 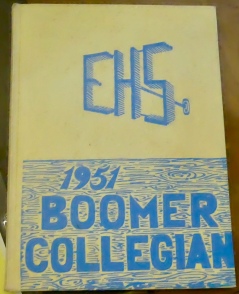 She helped us find junior and senior yearbook photos for Randy’s mom, Mable Wilson.   It was a fun day letting Randy re-live his childhood. 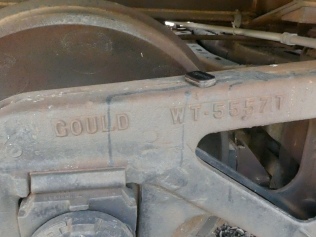 Kent and Pam have a goal of geocaching in every state.  They nabbed their first Oklahoma geocache in El Reno.

We were so glad to spend a few mostly carefree days with Kent and Pam.  We played a lot of cards and watched football and watched the Mariners – sometimes all three at once thanks to great wifi.   Unfortunately, real life beckoned us back and we needed to drive the 1000 miles back to Mesa. 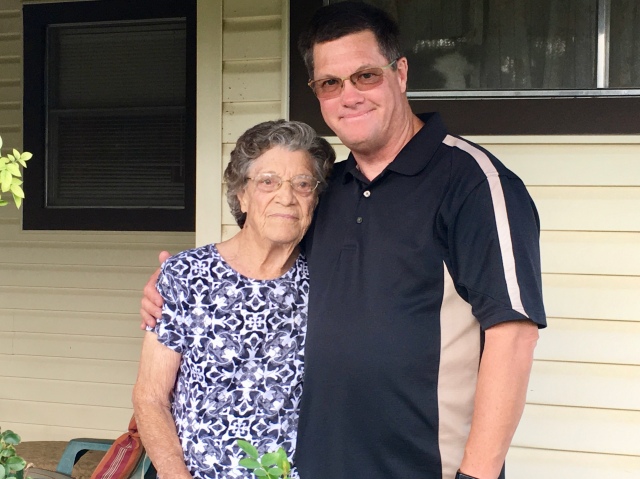 We stopped for a quick over-night with Randy’s aunt Lahoma near Witchita Falls, Texas.

It was bittersweet to drive past so many places on our “To Do” document.  We saw signs to Petrified Forest National Park and El Malpais National Monument among others.

We actually saw Cadillac Ranch in Amarillo from the road.   There are Cadillacs, highly decorated, submerged halfway in the ground.

Hopefully, we’ll be out on the road again next spring with a healthy Randy behind the wheel.  Again, we covet your prayers and invite you to follow this unwelcome diversion to our adventures at Caringbridge.org.  Our site is called Randy’s Bladder.

5 Responses to Welcome to Stillwater Ya’ll!