We left Lake Cascade a week ago.  It was a hard leave.   We felt like we were losing our boy Elko all over again.  This was the last place we had him with us.

Elko loved his woods.   He’d look at us and make it clear this was his private space and he didn’t need us to go into the woods with him.  If we had been leaving him behind to go play and travel, that would have been hard.

But that isn’t why we left Cascade sooner than expected.  The hard leave was worse. Did I mention it was only a week ago? It feels like an eternity.  We left Cascade for Boise and then a few days later drove 1100 miles to Mesa.  Why?  It is a sad tale.

Yearly bladder scopes had been part of our life since Randy’s urologist found a low grade papillary cancer in 2008.  Quarterly scopes were the norm after Randy’s second bladder cancer diagnosis in the spring of 2017.  Things had been going well but during the mid August scope a new tumor was visible. Subsequent biopsy revealed a new, and even worse, form of bladder cancer – his third.   This tumor is muscle invasive and the bladder and prostate need to come out. Good riddance to his bad bladder!!

Randy had researched this potential development long ago since bladder cancer usually comes back and comes back worse. Unfortunately, Randy could be a poster child for this tendency. He already had an idea which of the three types of bladder removal surgeries he would opt for – one that forms a new bladder using small intestine.

In consultation with his urologist, she recommended that he plan for that extensive surgery to be done elsewhere.  The Mayo Clinic in Scottsdale kept coming up as a good choice (thanks Sharon!).  After a frustrating false start for pre-surgery chemo with a Boise area oncologist, we decided to pursue everything at the Mayo Clinic.

We made that decision on Wednesday evening and the next day Randy had an appointment scheduled with the surgeon for the following Tuesday.  I arranged for an RV site for the fall with the promise of them making something work for the already booked January, February and March.   Everything fell into place quickly, in less than 24 hours, and it absolutely feels like a God thing. 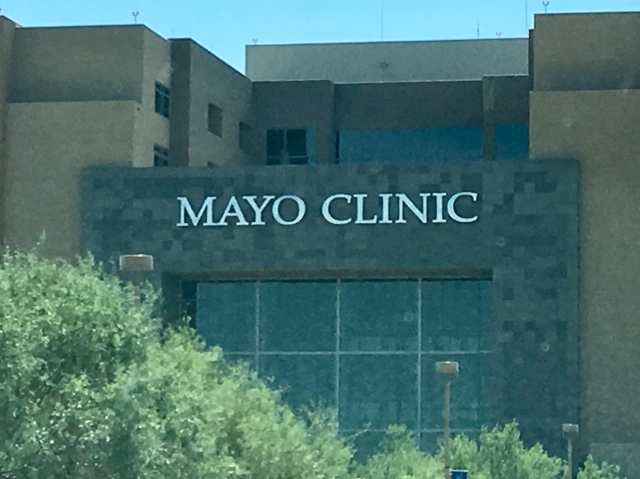 We drove all day Saturday and most of Sunday to be here for today’s appointment.  We feel confident in the doctor and the plan.  For the first time in four weeks, we had a doctor’s appointment that made us feel better instead of worse. We are encouraged.

The road ahead will be hard with aggressive chemo for six weeks and then extensive surgery. We are under no illusion otherwise.  We are so thankful for those who have upheld us with their time, prayers and good wishes.

We will have the support of Randy’s brother and sister in law who live in the Phoenix area but still covet contact with our family, Boise friends and road friends.

To make it easier to keep people updated we have opened a Caring Bridge site called Randy’s Bladder.   The link is:  https://www.caringbridge.org/visit/randysbladder/journal     You may visit the site or sign up to receive updates when either of us post new information.

It is likely that the Serene Wandering blog will be quiet for the time being, until we can get out there and have some fun again.

14 Responses to A Hard Leave