Fourteen Border Crossings in One Day!

We enjoy riding old trains and have been on quite a few including the Durango to Silverton trip I wrote about in Plan B:  Colorado! just a few weeks ago.   This time we were in the vicinity of the Cumbres & Toltec Scenic Railroad near  Pagosa Springs, Colorado.

The Cumbres & Toltec is advertised as the longest and highest narrow gauge railroad in America. Narrow gauge lines are 3 feet wide instead of the standard 4 feet 8 inches.  The narrow gauge allowed for tighter mountain turns.

The Cumbres & Toltec is a remnant of the Denver & Rio Grand Railway, built in 1881 for the mining industry in southwest Colorado.   The rail route through the mountains and over the 10,151 foot pass was built in less than one year.

In addition to mining interests, the railroad later moved timber, cattle, sheep and passengers.  A first class parlor car was part of the train until 1951.

By the 1950s most narrow gauge lines in the Rocky Mountains were scrapped.  This line was saved because oil and gas was discovered in the Four Corners area and it was used to transport equipment.  The Rio Grande Railroad abandoned the line in 1967.

Colorado and New Mexico joined together, contracting with Cumbres Toltec Operating LLC and the Friends of Cumbres & Toltec Scenic Railroad, Inc. to operate a tourist train.

We traveled an hour by car from Pagosa Springs, Colorado to Chama, New Mexico,  crossing the border enroute.

We began our train ride in Chama, New Mexico with tickets to ride the complete 64 mile route arriving in Antonita, Colorado.  We would return to Chama by motor coach.  The reverse is also possible. 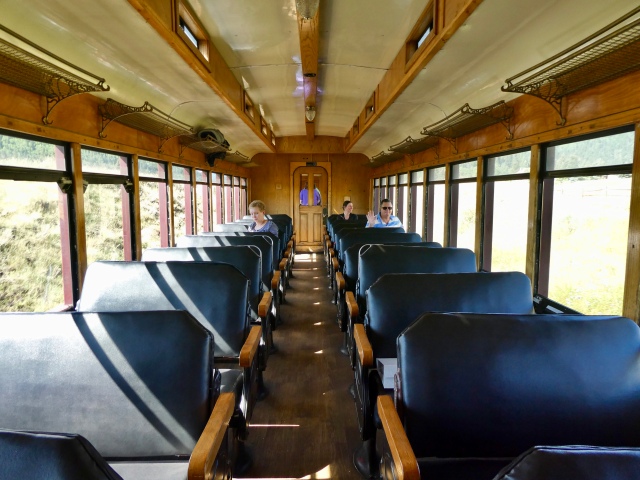 Window seats for everyone!   We could also go from side to side as scenery demanded.

Just two days previously the train had been completely full requiring more cars.  Since that train had more than seven cars, a second engine was required to pull the weight up the 4 percent grade out of Chama.

A volunteer docent moved throughout the train giving everyone free route maps and information.  He was outstanding.

Movie personnel utilized the train and this area while filming Indiana Jones and the Last Crusade.

Lobato Trestle sits 100 feet above Wolf Creek.  When the train requires a second engine the trestle cannot support the additional weight.  The first engine unhooks and goes across.  The second engine brings the train across and they reconnect. 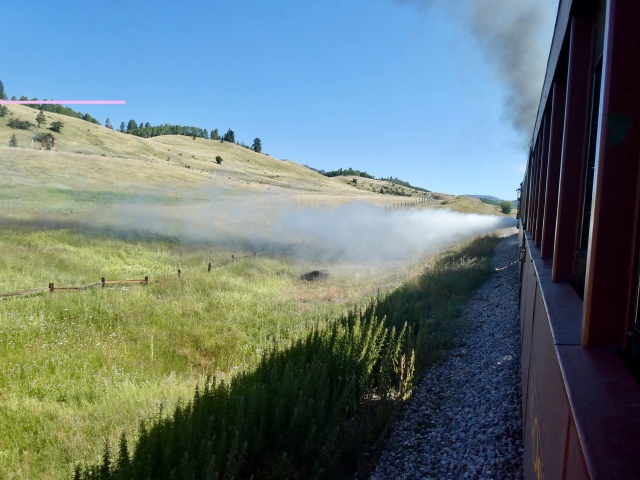 The engineer is doing a blowdown – releasing steam to adjust pressure and eject sediment.  Two cars back we got blow in our faces!  We learned that lesson quickly!

We went to the open-air gondola car for a short time.

For twice as much money we could have ridden in the restored parlor car.

A fire car followed us the entire route looking for embers.

At Cumbres Pass “station” eight people from our car disembarked.  Seven got off and met family members who had driven to pick them up.

This woman disembarked to continue her solo hike along the Continental Divide Trail.

This is Tanglefoot Curve.  Builders made wide loops to gain small amounts of elevation, in this case 39 feet.  We saw this looping many times throughout the trip.

We stopped to take on water for the steam engine.

The scenery was pretty awesome!

Two and a half hours into our journey we approached Osier.

Trains from both directions meet at Osier for lunch.  Passengers can continue on (like we did) or board the other train and go back to the same station you left from.  Lunch, a full turkey or meatloaf meal,  was included in the ticket price. 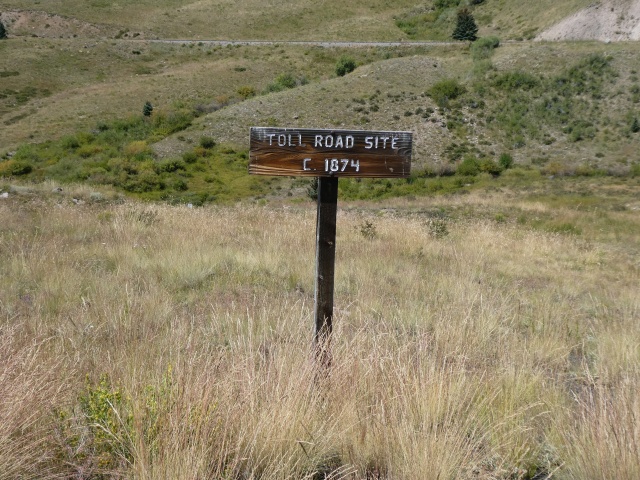 Osier used to be a toll station on the road from Conejos to Chama. 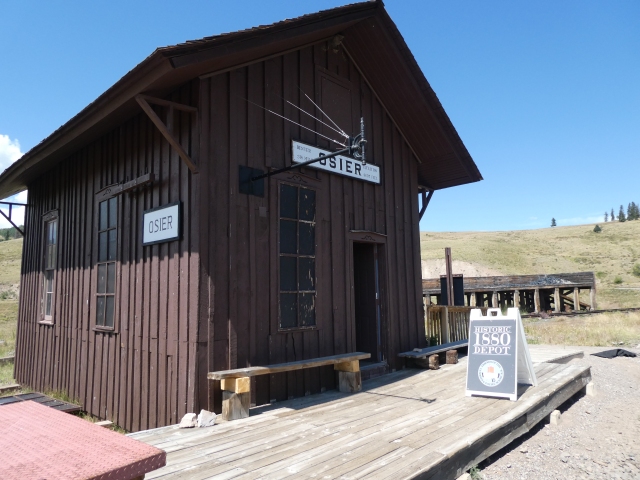 Osier became a section house for the railroad when it came through.

When we boarded the train to continue on a bird was trapped in our car.  Randy and another passenger were able to get it out.

We traveled through the Toltec Gorge, 600 feet above the Rio de Los Pinos River.  I wish the picture did the gorge justice.

Just west of the Rock Tunnel we saw a Garfield monument.  Railroad employees had a service at this site for Garfield on the day of his death in 1881.  The monument was dedicated by railroad employees.

A second tunnel, Mud Tunnel, required wooden supports over the entire 342 foot length.  A train once broke down in the tunnel, burning the supports.  Railroad workers constructed a road around the tunnel until it was repaired.  In the meantime, two trains met on either side of the tunnel and transferred cargo and passengers using the road.

Throughout the day we enjoyed seeing houses and cabins in the wilderness.  Some were in pairs or groupings and appeared to have road access.  This one was all alone and appeared to be accessible only by airstrip. 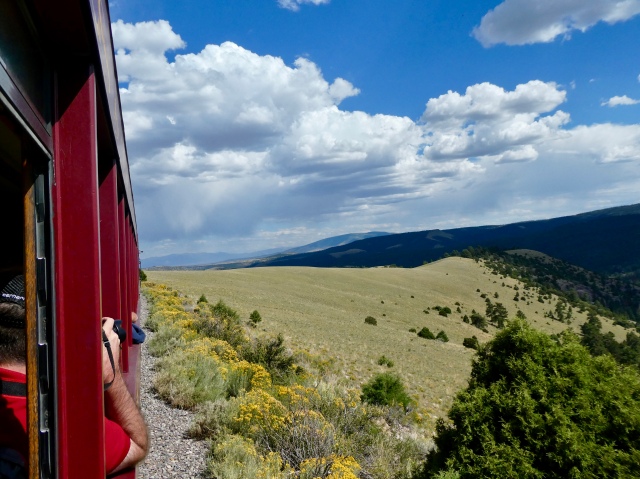 The scenery changed many times during our six hour ride

We saw entering New Mexico (or Colorado) signs throughout the day! 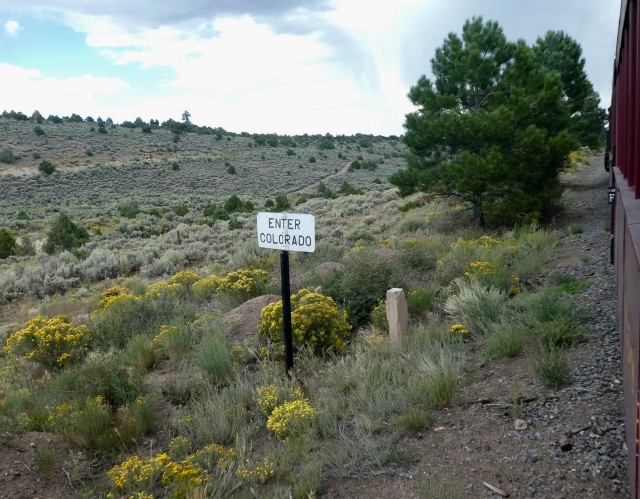 Sometimes a new sign appeared just a couple hundred yards down the track as the route looped from one side of the border to the other.   The train crossed the New Mexico-Colorado border eleven times!

As we approached Antonito we saw Hangman’s Ferguson Trestle (Mr. Ferguson was hanged on it.)   The trestle was accidently burned down during filming of the Willie Nelson’s movie:  Where the Hell’s That Gold?  They had to pay to have it rebuilt.

Randy and I have been fortunate to make seven or eight of these train trips.  We have liked them all but agree that the Cumbres & Toltec Scenic Railroad is our favorite.

6 Responses to Fourteen Border Crossings in One Day!