We have been settling in to our new desert home. This prickly pear cactus is in our yard. 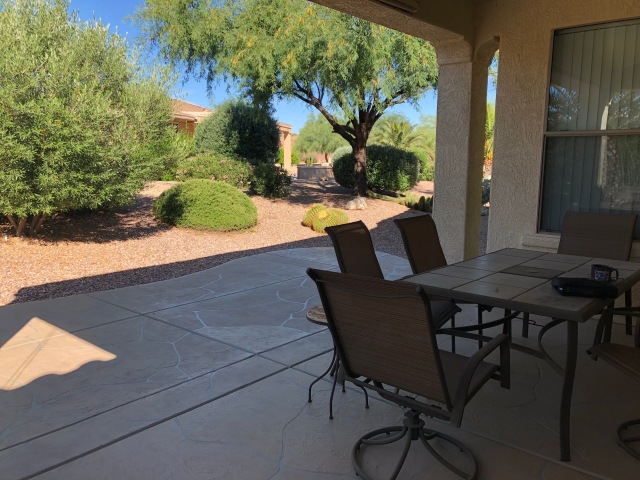 One of our pleasures is to sit on our back patio in the mornings and watch the wildlife.

The lizards stroll by – sometimes they do pushups! 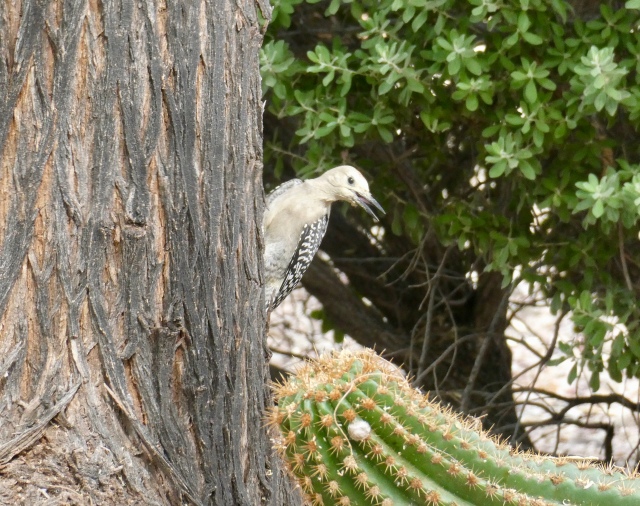 We see and hear a variety of birds.  Randy is partial to northern mockingbirds and I like cactus wrens. 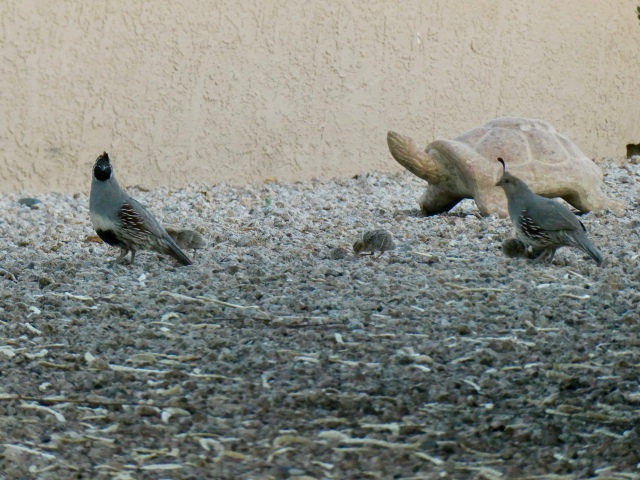 The quail have been so much fun to watch.  We are impressed with the way one parent is always vigilant while the family is feeding.  We see families with three to sixteen babies several times a day.   Obviously the turtle in the picture is stone, but the real critters move around the yard with little concern for the others.  They all just share the space. 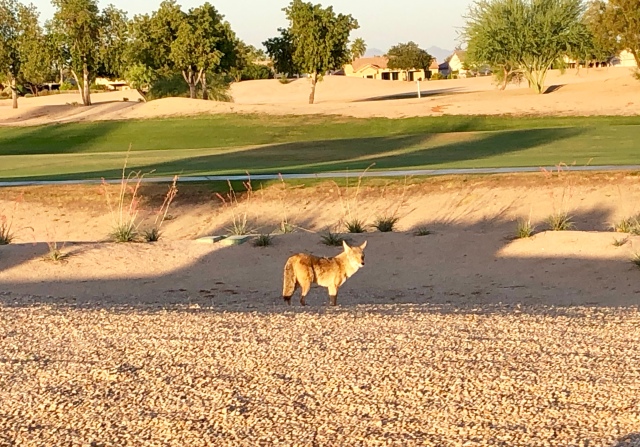 ….we also have coyotes in the area.   We haven’t seen one in our yard yet and hope we don’t.

There was very little that needed to be done to the house but we found a few things.  Randy had the garage floor finished with a high gloss epoxy treatment – all the better for those new wheels you’ll soon read about!

Our big project is upcoming.  In August we will have pavers placed and a solid patio cover extending from one end to the other along the back of the house.  We have a south facing back patio and, except for those few morning hours, it is basically not usable this time of year.

This time of year has some advantages too.  We are getting acquainted with our Sun City Grand community while events and venues have fewer people.

Randy has golfed and I have been line dancing, playing the ukulele and joined a new book club.  We have been to resort activities, game nights, Arizona Broadway Theater and a Diamondbacks game at Chase Field.

And for all that activity it was nice to have something to drive besides the big old truck!

All the wheels are in place in our three car, extra deep garage. 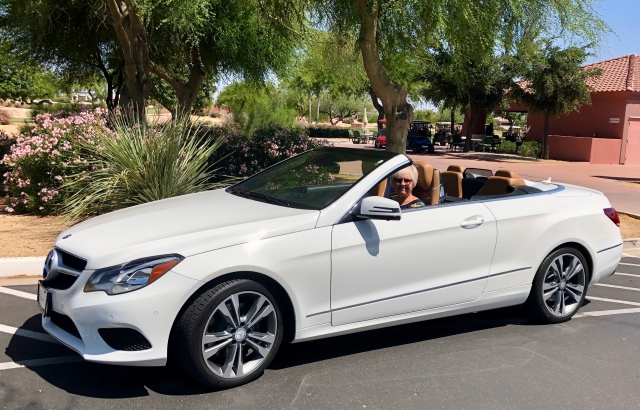 It took way longer than we thought it would to find my new wheels – like three months!  I wanted a newer used Audi convertible with navigation, back up camera, and without a black interior or exterior.  It was the no black interior that was the problem.   We searched in four states, bid on a car on Ebay twice, put a deposit on one in Salt Lake City, and finally decided on a 2015 Mercedes Benz E400 right here in the Phoenix area. It isn’t an Audi but we like it very much. 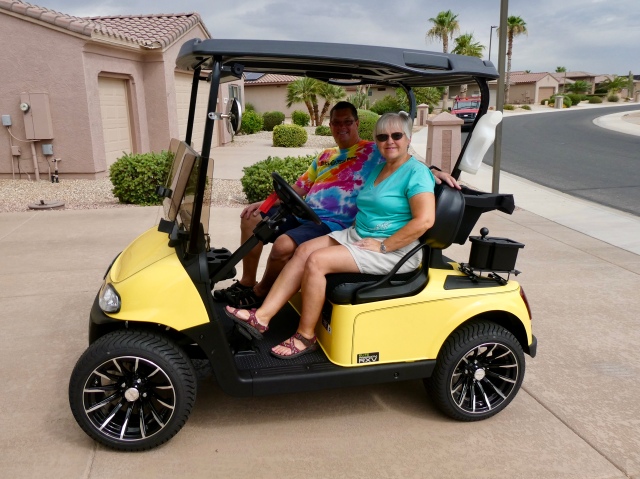 In contrast, we bought our 2017 E-Z-Go golf cart on our first day of seriously looking.  Randy did preparatory research and had things narrowed down to two manufacturers. He decided he wanted a cart with a maintenance free lithium battery so then our choice was between new and a golf course rebuild. We opted for the less expensive rebuild.   We both liked the idea of yellow, harkening us back to Randy’s little yellow BMW roadster (that my mother still owns).   We made choices for accessories and upholstery quite quickly.  Yes, I realize the “interior” is black!   The battery was the big thing.

And speaking of batteries….Shortly after we moved to Surprise our truck batteries had to be replaced.  The salesperson could not believe that they were the truck’s original 2012 batteries.  He said batteries do not last anywhere near that long here because of the heat.

And another battery story…. 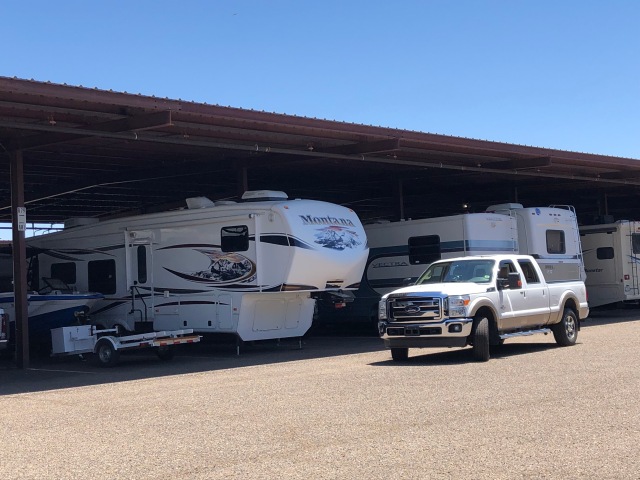 It was very bittersweet (think a few choked back tears) to leave our trailer in covered storage at the end of May.   It had been our home for five years and we wondered if it would feel abandoned or was glad to finally get a break after continuous use.

Six weeks later Randy picked it up for a “spa day”  and the 2012 trailer batteries were also dead.  Off to the battery store one more time.  We have definitely learned that heat is deadly to batteries, most don’t last longer than two years in this area. 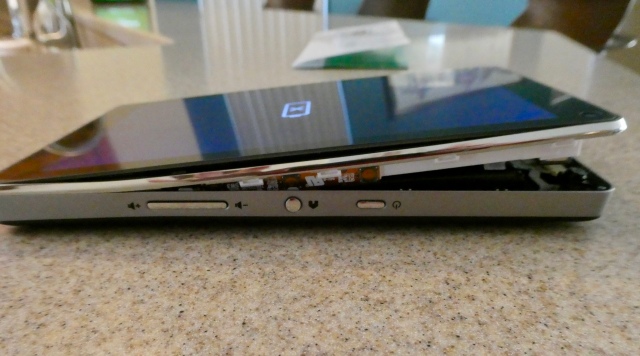 And yet another battery story!  Batteries expand when left exposed in the truck when the truck is in the sun.  This is our navigation GPS and it still works, even with a puffed out back.

So what other summer desert things have we learned?   That getting hot water for a shower isn’t a problem – especially when you have a solar hot water heater that is always bubbling.   Figuring out how it should work was Randy’s greatest engineering challenge in the new house.  Of course he eventually solved it and it works great.

Getting cold water is way more of a challenge.  If I need to do a cold water wash in the machine I do it at 5:30 in the morning.   Cool or lukewarm showers are problematic.

Overall we are surviving quite well in the desert heat, but only because the house, the car, and everywhere we go is air conditioned.   We also enjoy cooling off in our resort pool a half mile away.  It is a quick walk, bike or golf cart ride away.